A new bill submitted by extremist Otzma Yehudit party chief Itamar Ben Gvir will radically redefine the relationship between police and politicians, giving the police minister far more authority over cops than ever before in the history of the state, according to a copy of the proposal released Thursday.

Ben Gvir is set to become national security minister in the new government — a newly created role replacing that of public security minister — which will give him oversight of police. The new ministry that he’ll head will also control the Border Police force in the West Bank, which currently answers to the military.

The bill dictates that it is the minister who will set policy, relegating the police commissioner to the role of administrator charged with carrying out said policy. Currently, the commissioner sets policy in consultation with the minister, and the shift will seemingly give Ben Gvir wide control over a police force he has long been at odds with.

It also provides the minister broad powers to decide which issues do or do not merit tougher investigation and enforcement.

The bill stipulates that the minister will not be able to dictate the opening or closing of specific probes, such as investigations into politicians suspected of wrongdoing.

It specifies, however, that the minister will be authorized to set general policy on investigations and the handling of cases.

“The foundational principle in a modern democracy is that the political leadership — meaning elected representatives — delineates and directs policy, and the executive leadership implements this policy,” an explanatory text attached to the bill says. 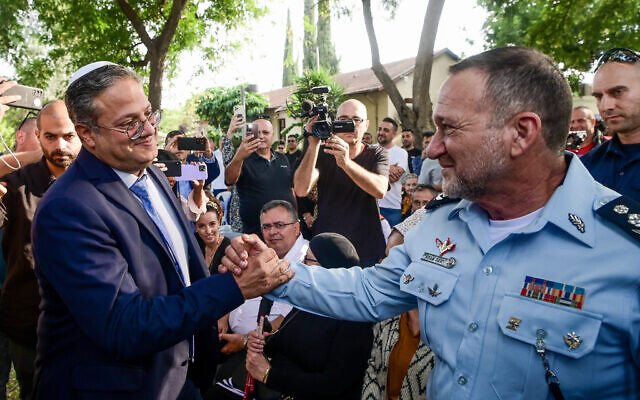 According to Channel 12 news, the bill is also being sponsored by MK Yariv Levin, a close confidant of presumed incoming premier Benjamin Netanyahu, who has been leading the Likud party’s coalition talks with allied factions.

“This is a fatal blow to the police, by turning the police commissioner into a pawn and trampling democracy,” he wrote on Twitter. “These are steps whose entire purpose is to further undermine the authority of the senior command and the status of the police, and God forbid the country.” 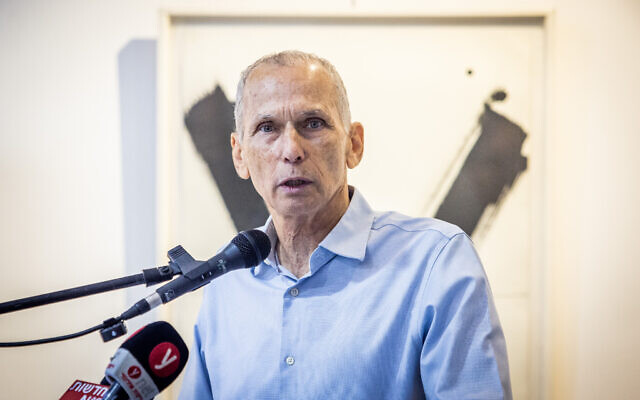 Ben Gvir, a far-right firebrand, has been accused of fomenting violence with incendiary visits to areas of East Jerusalem — by Police Commissioner Kobi Shabtai among others, according to reports.

He is a not-infrequent critic of police enforcement efforts against Jewish nationalists and what he considers a too-soft approach toward non-Jewish suspects. He has called for Jewish prayer to be allowed on the Temple Mount, where courts have given police leeway to set policy on enforcing rules prohibiting non-Muslim worship.

The announcement of the proposed legislation came as Shabtai and Ben Gvir appeared to break bread at the bat mitzvah of  the lawmaker’s daughter in the West Bank settlement of Kiryat Arba.

Earlier, Shabtai skipped an event marking promotions and appointments of police commanders, saying it was due to a medical examination.

Ben Gvir had sought to block several appointments, but he was turned down rejected earlier Thursday by the Attorney General’s Office.

The Otzma Yehudit leader reportedly fumed at Shabtai several days ago for not stopping the appointments.

Transportation Minister Merav Michaeli, who heads the center-left Labor party that Barlev belongs to, ripped Shabtai for missing the police ceremony while attending the bat mitzvah.

“Instead of fighting the bill that Ben Gvir is bringing to turn the police into a political arm, the police commissioner sucks up to those who humiliate him and the police, choosing to demonstrably absent himself from the ceremony… out of fear of being criticized by Ben Gvir, and then dancing at a family event of the very same Ben Gvir,” she tweeted.

“The police force needs someone who will protect it, not bring it as a bat mitzvah gift,” Michaeli added. 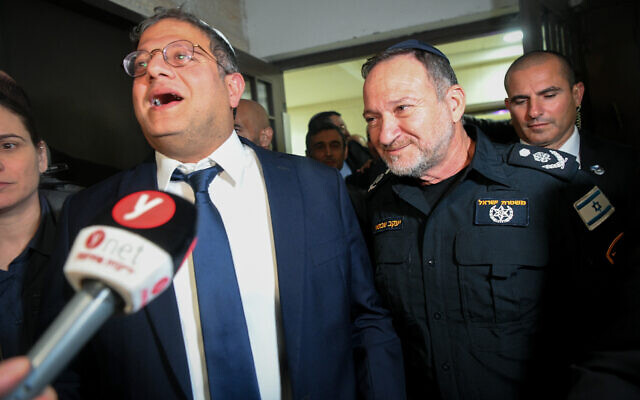 Last month, Shabtai denied harboring any ill will toward Ben Gvir, and said he would work with whoever becomes the next police minister.

“There’s no reason for us to hold a reconciliation because we never clashed,” Shabtai said shortly after the November 1 national election, weeks before Ben Gvir was promised the job by Netanyahu in the coalition agreement between Likud and Otzma Yehudit.

The incoming Likud-led coalition — which along with Otzma Yehudit will include two other far-right factions and a pair of ultra-Orthodox parties — is expected to seek to speedily pass the bill granting Ben Gvir expanded powers over police before the new government is sworn in.

Netanyahu asked Thursday for a two-week extension of his mandate to form a government, which is due to expire on December 11. Likud will reportedly use the additional time, which President Isaac Herzog is likely to grant, for a legislative blitz aimed at passing the bill and several other pieces of legislation needed to fulfill existing coalition commitments.