Radiation protection from Kyiv to the moon: Israeli space tech to shield Ukrainians

While anti-radiation shields of an Israeli company are still being tested in space on NASA’s Artemis 1 rocket, one of its founders along with US astronaut Scott Kelly embarked on a mission to personally deliver the protective kits to first responders in Kyiv.

Oren Milstein, co-founder of Israeli company StemRad — a developer of radiation protection suits for space explorers, emergency responders, and nuclear industry workers — and Kelly, a former NASA astronaut, traveled at the end of November to war-torn Kyiv to donate the first batch of 20 wearable kits to help shield first responders against potentially lethal gamma radiation in the event of a nuclear accident.

The trip comes less than two weeks after the uncrewed Artemis I space mission launched its debut flight,  aboard which were dummies wearing StemRad’s AstroRad, an anti-radiation suit co-developed with Lockheed Martin to protect vital organs from gamma radiation.

“The Artemis launch was the most exhilarating moment, for me, and for my family. And then so shortly after, to be on this train going from Poland to the darkness of Ukraine, arriving in Kyiv and providing this pivotal protection, while our space-based technology is still circling the moon, to be able do this here on Earth corresponds with our mission to provide radiation protection on Earth and beyond,” Milstein told The Times of Israel. “The timing was amazing.”

Speaking from Tampa, Florida, Milstein recounted that as he was following the developments of the war in Ukraine, including the repeated shelling of a nuclear power plant in southern Ukraine and Russian President Vladimir Putin’s threat to use nuclear weapons, he was getting concerned about Ukraine needing protection in the event of a nuclear accident.

StemRad was set up after the 2011 Fukushima nuclear disaster in Japan to develop protection for first responders exposed to the highly penetrating gamma radiation emitted in such events. StemRad’s radiation suits are now used to protect workers at nuclear reactors, radiological first responders, physicians and military forces, as well as astronauts. 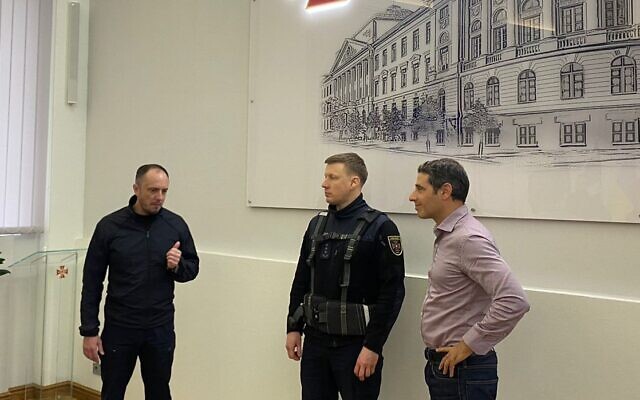 “Then during the summer, I received a letter from the Ukrainian parliament asking for a donation of 200 of our protective kits,” Milstein said.

He conditioned his acquiescence on accompanying the donated kits to Kyiv, in order to “first of all show my support but also explain the science behind the technology, the use cases for which it is most applicable, and how to use it.”

Milstein, who is StemRad’s CEO and chief scientific officer, explained that as the Israeli-American company is still fairly small, it could donate 20 protective kits.

“For the next 180, which we are going to be doing at cost, we are hoping to get help and support from individuals that are interested in making sure that the first responders in Ukraine are safe and in the process, also making the world safe,” Milstein said. “This is the kind of equipment that you can’t afford to wait for after the events.”

As he was starting to prepare for his trip to Ukraine, Milstein asked Kelly, who has been advising StemRad in its NASA space endeavors, to join him on the journey. Since Russia’s invasion of Ukraine, the US astronaut has become a strong advocate for Ukraine, specifically on the humanitarian front. In October, Kelly was named an ambassador for Ukraine’s UNITED24 fundraising platform, initiated by President Volodymyr Zelensky.

“So next thing I know, we were setting up this crazy visit to Ukraine and once Kelly was involved, we got tremendous support from President Zelensky’s office to make this a successful visit,” Milstein said. “After a 20-hour night train ride from Warsaw we made it into Kyiv and there we were embraced at the highest levels.”

In a meeting with Zelensky, Kelly presented the president with his personal anti-radiation protection vest. 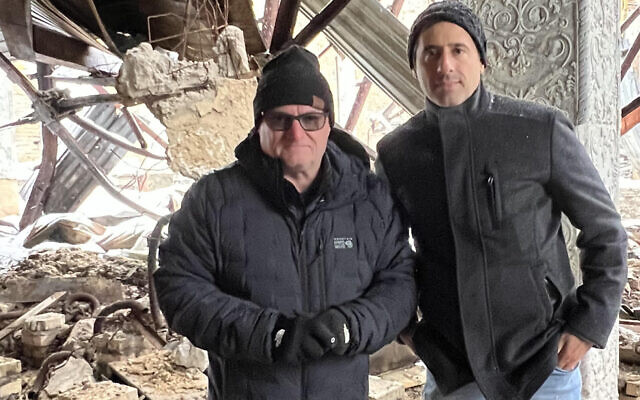 “President Zelensky was extremely thankful and said that he just got back from Chernobyl the other day, and he would have used it there had he had it and that for any kind of radiological incident in the future, he would be sure to use this life-saving equipment,” according to Milstein.

During the short trip, Kelly and Milstein met with firefighters and the leadership of Ukraine’s emergency rescue services to explain the technology.

“I was pleasantly surprised in my visit to the Department of Emergency Services to see the Israeli flag waving proudly,” he noted. “The table was also adorned with Israeli flags, so they were very appreciative also from that standpoint, and I was happy to represent Israel in this function.”

StemRad’s technology doesn’t try to protect the whole body, but aims to selectively protect organs with exceptional sensitivity to radiation, like bone marrow in the hip or in the vertebrae, and the gastrointestinal system.

Exposure to gamma radiation can result in radiation sickness, formally known as acute radiation syndrome — the accelerated destruction of the blood cells and the inability of the body to replenish them due to the damage sustained to bone marrow, which is needed to generate new cells.

Fifty percent of the body’s bone marrow is located in the groin and midsection areas — the parts StemRad suits protects, ensuring that workers are protected against the effects of radiation sickness but are able to maintain freedom of movement needed to assist others.

“It’s a very important tool to protect firefighters but also really civilization and specifically in Europe in this case, because if first responders are not emboldened to enter reactors in a quick and brave fashion to put out fires or to provide necessary cooling, then the ramifications will not be local only to that village in Ukraine or to the surrounding city — the implications are global,” Milstein warned.

Ricky Ben-David contributed to this report.