Rebel Meretz MK Ghaida Rinawie Zoabi said Saturday she has completely “lost faith” in the leaders of the coalition and has no intention of saving the floundering government.

Speaking to Channel 12 news on Saturday, Rinawie Zoabi said she was resisting pressure to resign from the Knesset after she and another coalition lawmaker voted to help defeat a key bill, further unsettling the already trembling government.

Both Rinawie Zoabi and Ra’am MK Mazen Ghanaim are facing pressure to quit after voting with the opposition against a measure to renew the application of Israeli law to settlers in the West Bank. The Islamist Ra’am party’s three other Knesset members abstained, as did rebel Yamina MK Idit Silman of Prime Minister Naftali Bennett’s party, and the bill failed to pass in Monday’s 58-52 vote.

Rinawie Zoabi said she was not responsible for the likely impending fall of the coalition, and instead blamed right-wing lawmakers for the coalition’s ills.

“The Jewish politicians in the coalition just want to use us (Arab MKs,) Silman and Shaked are the ones who are taking apart the coalition,” she said, referring to hardline Interior Minister Ayelet Shaked, also of Yamina.

Rinawie Zoabi briefly quit the coalition before being cajoled back, but since then she has continued to defy the party line.

She said her only demand from coalition architect Yair Lapid had been that she does not have to vote for laws that were difficult for the Palestinians and her conscience. “I returned to the coalition and I was in a difficult position as far as the Arab community was concerned — they did not want me to go back.”

She accused the other coalition members of enacting a series of laws that “broke the status quo” and accused Justice Minister Gideon Sa’ar of threatening that “something will happen” to those coalition members who opposed the West Bank civil law bill.

Asked if she would quit she said: “I am in a position where I have a complete lack of faith in some of the coalition party leaders, I tried twice to come toward them but got nothing in return.” 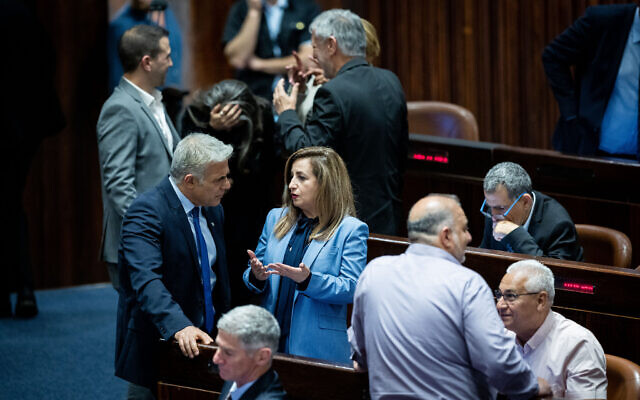 Foreign Minister Yair Lapid speaks with Meretz MK Ghaida Rinawie Zoabi during a plenum session at the Knesset on May 23, 2022. (Yonatan Sindel/Flash90)

Channel 12 quoted her as telling those close to her she would not resign and would “punish the government.” She denied the statement.

But she said she would vote against the law a second time even if it meant that the government would fall and that the Meretz party would not reenter the Knesset in future elections, as polls predict.

However, the Kan public broadcaster said she had actually made a list of demands the coalition must meet to secure her resignation.

Among her reported demands were for a government plan focused on developing Nazareth, the transfer of promised funds for a government hospital in the city, increased responsibilities for local Arab municipal authorities, and an increase in Arab representation in the public sector

On Saturday night, several Meretz supporters protested outside her home, calling on her to quit the Knesset. Images from the demonstration in the northern town of Nof Hagalil showed a handful of protesters near Rinawie Zoabi’s home.

In a statement, the protesters said Rinawie Zoabi’s conduct could bring down the coalition “and lead to a government of darkness led by [Itamar] Ben Gvir, [Bezalel] Smotrich and [Benjamin] Netanyahu,” referring to a pair of far-right opposition MKs and the former prime minister.

Rinawie Zoabi noted that none of those protesting were Arabs, who were her constituents.

A senior coalition member also told Channel 13 that Rinawie Zoabi and Ghanaim “would be directly responsible for the Netanyahu-Ben Gvir-Smotrich government.”

Ahead of the protest, Kan news said that Meretz and Ra’am told Bennett that they had lost control of Rinawie Zoabi and Ghanaim, who have rejected calls to resign and have promised to vote against the bill if it’s brought to a vote again.

Despite that, the focus in the beleaguered coalition was also on want-away Yamina MK Nir Orbach who has been threatening to leave the coalition unless he can be shown that it has a viable way forward.

Orbach was scheduled to hold another meeting with Bennett on Sunday, with the prime minister planning on asking him to be patient and give him some more time. 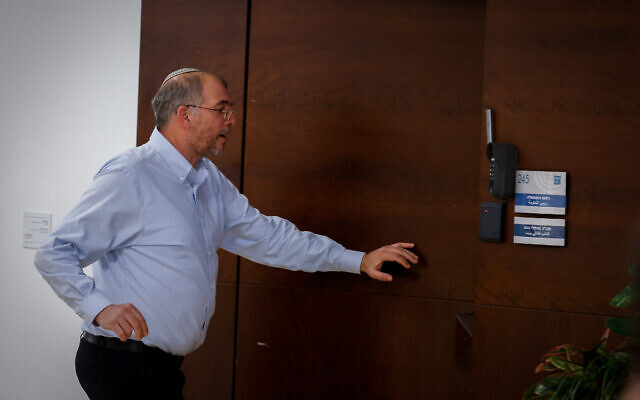 Yamina MK Nir Orbach arrives for a party meeting at the Knesset, in Jerusalem on May 16, 2022. (Olivier Fitoussi/Flash90)

Meanwhile,  senior Likud members told Channel 12 that they were becoming disillusioned with Orbach’s stalling and wanted him to quit the government immediately.

“Orbach cut off contact with us, it looks like he is playing with us,” the official said.” He’s on his way to becoming like Ayelet Shaked, where no one will welcome them to the Likud.”

The Yamina MK has publicly denied persistent reports that he is negotiating with Netanyahu to potentially join Likud and form an alternate government. But sources close to Orbach have told Hebrew-language media that he is exploring such a possibility.

The right-wing MK has been pegged as a flight risk in recent months since Silman’s defection and has issued ultimatums for his continued support of the government.

On Friday, Foreign Minister Yair Lapid warned the coalition’s various rebels that “anyone endangering this government from within should know they’ll pay a price.”

After losing its Knesset majority in April following Silman’s resignation from the coalition, the government has limped from one crisis to the next. Rinawie Zoabi announced she was quitting the coalition last month before reversing her decision days later, though she still voted against the so-called West Bank bill this week.

On Saturday, Lapid assailed Netanyahu in a Facebook post after the latter shared an article claiming that as part of his efforts to get Rinawie Zoabi back into the fold, Lapid had agreed to repopulate two Arab villages destroyed in 1948.

Denying the opposition leader’s claims as “bald-faced lies,” Lapid added that “you have to pinch yourself in order to believe that this man was ever prime minister.”