Some 200 Jewish women, most from Russia and Ukraine, landed in Israel last week to learn about Judaism, Zionism and the country’s history and present.

In any other year, it would have likely been a lovely but unexceptional trip, but in 2022, in light of Russia’s invasion of Ukraine, it was a profound experience for participants and organizers alike, despite a host of logistical, emotional and political complications.

The trip was put together by the organization Momentum, which seeks to deepen the connection between Jewish mothers, or at least mothers with Jewish roots, to Judaism and Israel. The organization believes that mothers still play an outsized role in things like children’s education, family practices and religious observance. (Get it? MOM-entum.)

“We see mothers as agents of change,” said Anna Vainer, who leads the group’s programs in Europe and Asia and who was one of the main organizers of the trip.

The group’s itinerary included the standard fare for first-time visitors: the Western Wall, Safed, Masada, the Sea of Galilee, the ANU Museum of the Jewish People. But some of these took on far greater emotional valence for the participants than in the past because of the war.

“Yad Vashem — that whole place was one big trigger for these women. There was one participant from Mariupol. The community there has seven kids that were abducted by the Russian forces and no one knows where they are,” Vainer said. “For her, going to Yad Vashem is… We had to come up with accommodations, but one of our messages was that we know there can be triggers but we’ll help you deal with it.

“In the end, she came up to us and said she didn’t want to go into Yad Vashem because it would be too traumatic for her but that she was going to do it anyway. ‘The Jewish people were able to survive under such conditions. That gives me strength.’ Those were her words,” Vainer said.

About half of the 200 participants came from Russia, another 40 or so were Ukrainian, 10 came from Estonia, 10 from Latvia, 10 from Germany and 10 from Israel. The Ukrainian participants included women who are still currently living in Ukraine, as well as those waiting out the war in other European countries and a few who were in the process of obtaining Israeli citizenship.

They were selected for the program by organizations in their home countries, including Chabad, the Jewish Agency, Jewish community centers and others who felt the participants could benefit from the trip personally and that they would be likely to get more involved in the community after completing it. 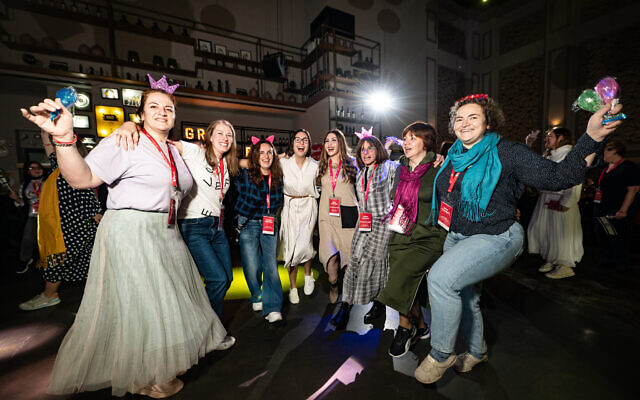 Natasha Yampolskaya, originally from Kazakhstan but now living in St. Petersburg, Russia, said that despite having Jewish roots, she had never gotten involved in the small local Jewish community in Almaty, Kazakhstan, where she lived until 2019. When she and her family moved to St. Petersburg, they got involved with a Jewish organization called Adain Lo, Hebrew for “not yet,” that, among other things has a program for children who have disabilities — her son has autism — and through the group learned more about Judaism.

During the trip, Yampolskaya, a mother of three, was one of the 59 participants who chose to adopt a new “Jewish name,” picking the name “Noa.” The name comes from a Biblical story about a man who has only daughters — one of them named Noa — and, flouting patriarchal trends, decides to leave them his estate when he dies. Yampolskaya said she first came across the name years ago and it always resonated with her so she decided to take it as her own. 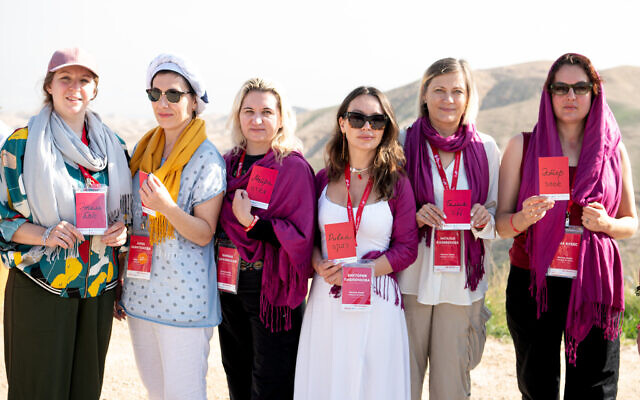 Women from Russia, Ukraine, Estonia, Latvia and Germany take ‘Jewish names’ for themselves on top of Masada in southern Israel as part of the Momentum program in December 2022. (Momentum)

“My life has changed dramatically since moving to St. Petersburg,” she said, quickly adding, “For the better! I finally started learning about my roots.”

Yampolskaya’s not sure yet what her biggest takeaway is from the trip, noting the whirlwind itinerary. “I am still processing. I have to go home and show my family the pictures,” she said.

Katya Ryabova, a mother of two from Odesa, Ukraine, was always aware of her Jewish roots but said her family had gradually stopped practicing the religion.

“My mother’s grandmother, my great-grandmother, she kept the traditions. My grandmother stopped keeping the traditions but she still spoke Yiddish,” Ryabova said, speaking through Vainer, who translated her remarks into English. Ryabova’s immediate family’s only religious practice was eating matzoh on Passover, she said.

A few years ago, Ryabova started working at the local Chabad center as an administrator, growing close to the rabbi, Avraham Wolff, and his wife Chaya. “They’re like family,” she said. She also sends her three-year-old daughter to the Chabad preschool.

“Now on Friday nights, I say the prayers for the candles in Russian, and my daughter says them in Hebrew,” Ryabova said.

“My daughter knows that we are supposed to have challah on Friday night but because we have power outages and can’t make our own, we have to go to the synagogue to get them,” she said.

For Ryabova, the Shabbat that the group spent in Jerusalem was by far the most significant part of the trip. “It was worth it to come just for Shabbat at the Western Wall,” she said.

The trip was not only her first visit to Israel but her first time flying anywhere, as she has a deep fear of flying. It was also her first time being away from her husband and children since the start of the war.

“I’m waiting impatiently to go back. I’m even impatient to get back to work,” she said.

Leaning into the complications

Momentum first started leading delegations of women from Russia and Ukraine, as well as other eastern European and central Asian countries, in 2014. Until then, the groups had primarily been opened to women from the United States, but Momentum expanded its operations as part of a funding agreement with the Diaspora Affairs Ministry. The ministry still funds the organization, providing roughly a third of its budget, and also helped with some of the logistical aspects of the recent trip, specifically helping the Ukrainian participants get entry visas to Israel.

Due to the coronavirus pandemic, the organization was forced to halt the trips for the past two years. As travel restrictions faded and it became clear that the delegations from eastern Europe could begin anew, the organization set to work. And then, on February 24, Russia invaded Ukraine.

“We had to decide what to do. Could these trips that are focused on having a shared Jewish experience survive in such difficult and complicated conditions, where we feared there could be hostility, serious hostility, between the different sides?” Vainer said. “We made a decision as an organization that we would have mutual responsibility and unity without uniformity. We thought this responsibility we have for one another can’t end because of these complicated conditions, and that these women need us now more than ever.” 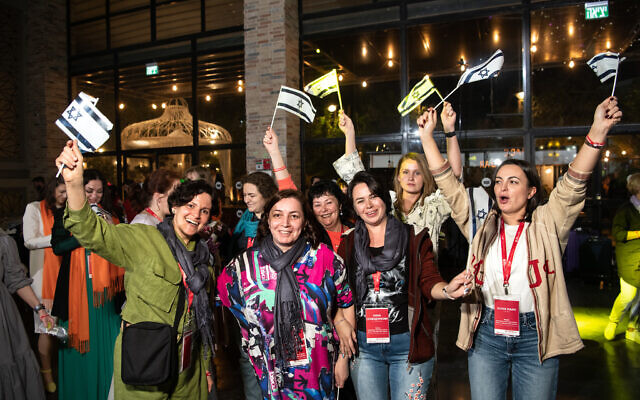 This was a marked departure from most other international Jewish organizations that previously operated in the former Soviet Union and eastern Europe, which have generally either distanced themselves from Russia’s Jewish communities entirely or kept them cordoned off from interactions with other communities during the war, preferring to avoid any potential confrontation or controversy.

In addition to the concerns about conflict among participants, Momentum was also worried about the safety of Russian participants who could face serious consequences back at home if they are seen as being sympathetic to the Ukrainian cause.

Though the organization decided to press ahead with its eastern European mission, it instituted some special guidelines in order to both limit the potential for discomfort on the trip and legal repercussions afterward.

For instance, flags were banned on the trip, except for Israeli ones, as were shirts with political slogans. Participants were barred from dressing in the colors of their country’s flag. 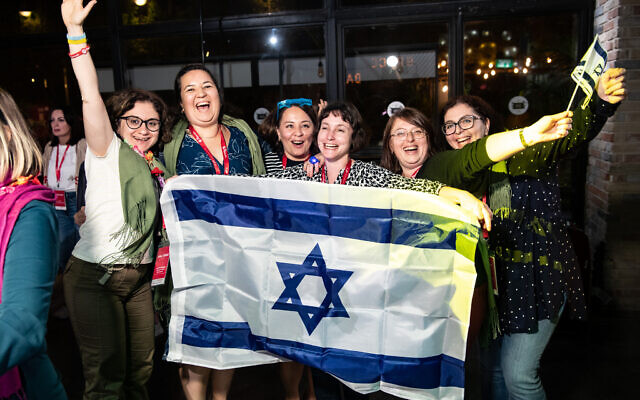 As the group was divided into four buses based on the organizations that brought the women on the program, the Ukrainian and Russian participants were generally separated, though there was one mixed bus. (This was not a change but how the trips are run every year.)

Vainer said the purpose of the trip was not to mediate between the Ukrainians and Russians, or the Russians and Estonians, Latvians and Germans for that matter, in some kind of peace-making effort, but to focus on Jewish unity in general. Yet natural meetings between Russian and Ukrainian participants happened anyway.

“There were moments for spontaneous discussions. We saw that they did get together. They would tell us that they sat together in the lobby of the hotel and had a glass of wine, that they all knew they were putting aside politics and just talking about ourselves,” Vainer said.

In addition, the staff running the program underwent special training to prepare them for the complexities of such a group, Vainer said.

“For the first time, we also included two psychologists with backgrounds in trauma who volunteered. We thought that there would be moments where they would be needed. They ended up working overtime,” she said.

On the second-to-last day of the program, for instance, the Russian military conducted widescale artillery strikes across Ukraine, knocking out power to much of the country and making it impossible for the Ukrainian participants to contact their families to make sure they were safe.

“It was difficult to come, but my husband pushed me to do it. They’re not bombing houses anymore. They’re just bombing infrastructure. Yesterday because of a power outage there was no running water, but the water came back today. And they’ll be getting power back tonight,” Ryabova said.