Two people were killed while trying to cross a busy highway to help victims of a car crash early Friday morning, as the death toll on Israel’s roads over the past several days continued to mount.

The two were attempting to walk across Highway 4 near Yad Mordechai in southern Israel when they were both struck by passing cars, according to police following an initial investigation.

They had been attempting to provide help after a crash between two other cars on the road, one of the main highways along the southern coast north of Gaza.

The two, both middle aged-men, were declared dead at the scene.

“It was very dark out,” Magen David Adom paramedics said in a statement.

The drivers of the vehicles in the other crash, men aged 28 and 67, were taken to a nearby hospital with light-to-moderate injuries, MDA said. 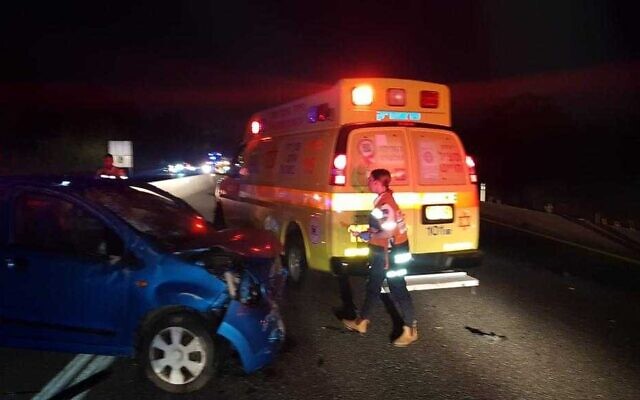 The scene of a road fatality following a crash on Highway 4 on August 12, 2022. (Magen David Adom)

The police did not release any information about the drivers of the cars that fatally struck the two other men.

The fatalities were the latest of a particularly deadly period on Israel’s roads. On Thursday night, a mother and her two young daughters were killed when a bus rolled away from its driver and smashed into a bus stop in Jerusalem.

Days earlier, another bus in the same Jerusalem neighborhood lost control and crashed into a building, killing a man, 70. 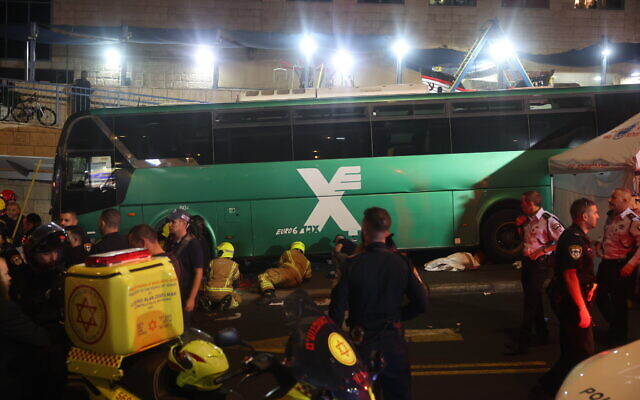 The scene of a bus crash on Jerusalem’s Shamgar Street on August 11, 2022. (Yonatan Sindel/Flash90)

Hours earlier on Thursday, a 54-year-old woman and her 7-year-old niece from Qalansawe were killed when a car and a truck collided at the Be’erotayim Junction along Route 57 near Netanya.

In another incident earlier Thursday morning, a 40-year-old man died after his truck was hit by another truck in the Tel Aviv suburb of Holon.

On Wednesday, an Israeli man was killed when a Palestinian driving a stolen car collided with him on Route 5 in the West Bank, near the central Israeli city of Rosh Ha’ayin. The Palestinian driver was also killed.

Less than an hour after the deadly West Bank collision, a A 25-year-old motorcyclist was killed in a crash involving another motorcycle and a car on Route 65 near the northern Israeli town of Kafr Qara, southeast of Haifa.

Despite the rising death toll, the 213 traffic fatalities in Israel this year as of Thursday morning was still 4% lower than the year previous, according to official figures from the National Road Safety Authority.

A total of 364 people were killed in traffic incidents in Israel in 2021.