“We are taking a decisive step by signing Ukraine’s application for accelerated accession to NATO,” Zelensky said in taped remarks.

The Ukrainian president cited Western support for his country’s battles against Russia as proof that Kyiv should be accepted into the alliance.

“De facto, we have already proven compatibility with alliance standards. They are real for Ukraine — real on the battlefield and in all aspects of our interaction,” Zelensky said. “We trust each other, we help each other, and we protect each other. This is the alliance.”

It wasn’t immediately clear what the accelerated application would mean, since accession requires the unanimous support of the alliance’s members.

Russian President Vladimir Putin has repeatedly made clear that any prospect of Ukraine joining the world’s largest military alliance is one of his red lines and it was among the justifications he has cited for his invasion.

Putin’s land-grab and Zelensky’s surprise NATO application sent the two leaders speeding even faster on a collision course that is cranking up fears of a full-blown conflict between Russia and the West.

With Ukraine vowing to take back all occupied territory and Russia pledging to defend its gains, threatening nuclear-weapon use and mobilizing an additional 300,000 troops despite protests, the two nations are on an increasingly escalatory collision course.

Zelensky said that Kyiv would not negotiate with Russia — which sent troops into Ukraine on February 24 — as long as Putin was in power.

“Ukraine will not hold any negotiations with Russia as long as Putin is the president of the Russian Federation. We will negotiate with the new president,” Zelensky said. 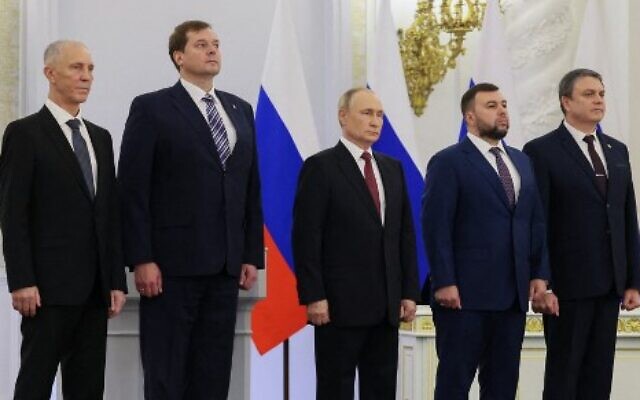 In a speech before signing the treaties, Putin urged Ukraine to sit down for peace talks but immediately insisted he won’t discuss handing back occupied regions — keeping him on a collision course with the Ukrainian government and its Western backers that have rejected his land-grab.

The pro-Kremlin leaders of the annexed territories claimed the regions voted in favor of becoming part of Russia in referendums that Western capitals and international organizations did not recognize.