WASHINGON (AFP) — After 18 months of arduous negotiations and a marathon night of debate, the US Senate on Sunday passed Joe Biden’s ambitious climate, tax and health care plan — a significant victory for the president ahead of crucial midterm elections.

Voting as a unified bloc and with the tie-breaking vote cast by Vice President Kamala Harris, Democrats approved the $430-billion spending plan, which will go to the House of Representatives next week, where it is expected to pass before being signed into law by Biden.

The plan, crafted in sensitive talks with members on the right wing of his Democratic Party, would include the biggest US investment ever on climate — $370 billion aimed at effecting a 40 percent drop in greenhouse gas emissions by 2030.

That would give Biden a clear victory on one of his top agenda items and go some way toward restoring US leadership in meeting the global climate challenge.

Biden hailed the passage of the bill, highlighting the work that went into it — and acknowledging that not everyone is happy with the final result.

“It required many compromises. Doing important things almost always does. The House should pass this as soon as possible and I look forward to signing it into law,” the president said in a statement.

The bill — officially known as the “Inflation Reduction Act” — passed the Senate with no Republicans voting in favor.

Conservative lawmakers have criticized the bill as wasteful spending, with top Republican Senator Mitch McConnell accusing Democrats of voting to “double down on their economic disaster.” 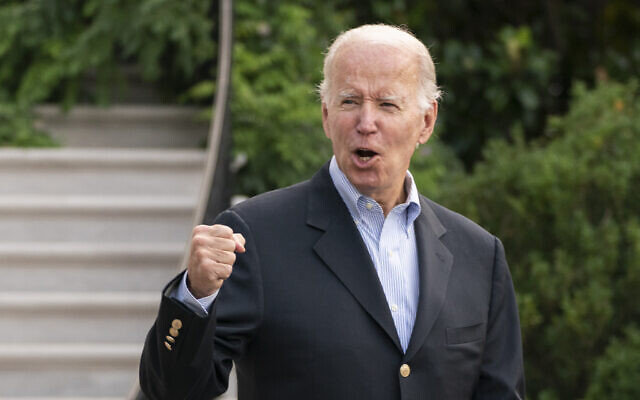 US President Joe Biden responds to reporters’ questions as he walks to board Marine One on the South Lawn of the White House in Washington, on his way to his Rehoboth Beach, Delaware, home after his most recent COVID-19 isolation, August 7, 2022. (AP Photo/Manuel Balce Ceneta)

The bill would provide Americans with a tax credit of up to $7,500 when purchasing an electric car, plus a 30% discount when they install solar panels on their roofs.

But the Alliance for Automotive Innovation, a group representing major automakers, on Sunday said that most cars would not meet the bill’s electric vehicle tax credit requirements, calling it a “missed opportunity.”

The legislation would also provide millions to help protect and conserve forests — which have been increasingly ravaged in recent years by wildfires during record heat waves that scientists say are linked to global warming.

Billions of dollars in tax credits would also go to some of the country’s worst-polluting industries to help their transition to greener methods — a measure bitterly opposed by some liberal Democrats who have, however, accepted this as a least-bad alternative after months of frustration. 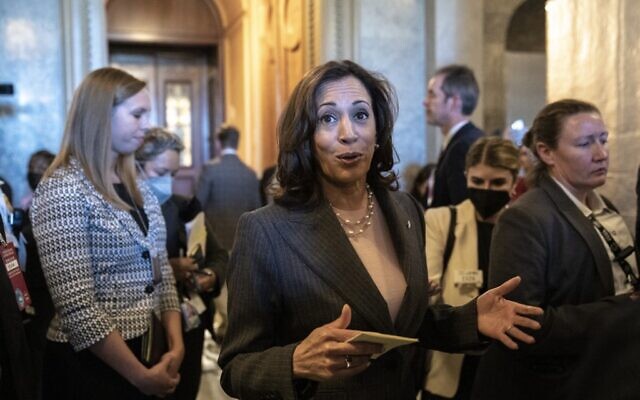 US Vice President Kamala Harris speaks to reporters outside the Senate Chamber after passage of the Inflation Reduction Act at the US Capitol, August 7, 2022 in Washington, DC. (Drew Angerer/Getty Images/AFP)

Biden, who came to office with promises of sweeping reforms, has seen his hopes dashed, then revived, then dashed again.

Democrats’ narrow edge in the Senate has given a virtual veto to moderates such as Joe Manchin of West Virginia, who earlier had used that power to block Biden’s much more expansive Build Back Better plan.

But in late July, Senate Democratic leader Chuck Schumer managed to engineer a compromise with the West Virginian, whose state’s economy depends heavily on coal mining.

“This bill is gonna change America for decades,” Schumer said after its passage, while Manchin tweeted that it “will lower the inflation taxes that have been so hurtful for West Virginian and American families.” 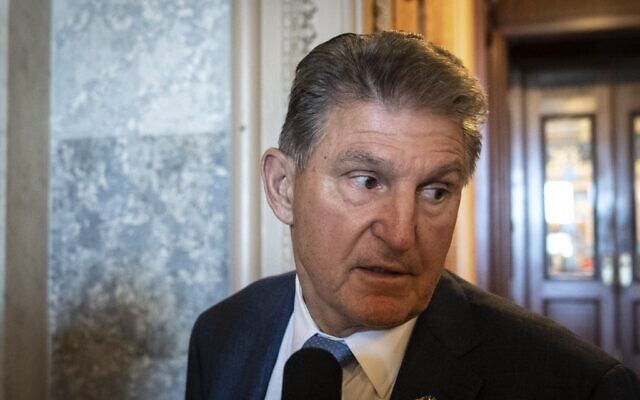 US Senator Joe Manchin talks to reporters during amendment votes, also called the “vote-a-rama,” on the Inflation Reduct Act at the US Capitol, August 7, 2022 in Washington, DC. (Drew Angerer/Getty Images/AFP)

Senators finally opened debate on the text on Saturday, with final passage not until Sunday afternoon.

Late Saturday, they began working through a marathon procedure known as a “vote-a-rama,” in which members can propose dozens of amendments and demand a vote on each one.

That allowed both Republicans, who view Biden’s plan as too costly, and liberal Democrats, who say it does not reach far enough, to make their opposition clear.

Influential progressive Senator Bernie Sanders used that platform through the evening to propose several amendments aimed at strengthening social planks in the legislation, which were considerably weakened during the months of negotiation.

The bill would provide $64 billion for health care initiatives and ensure a lowering of some drug costs — which can be 10 times more expensive in the United States than in some other rich countries. 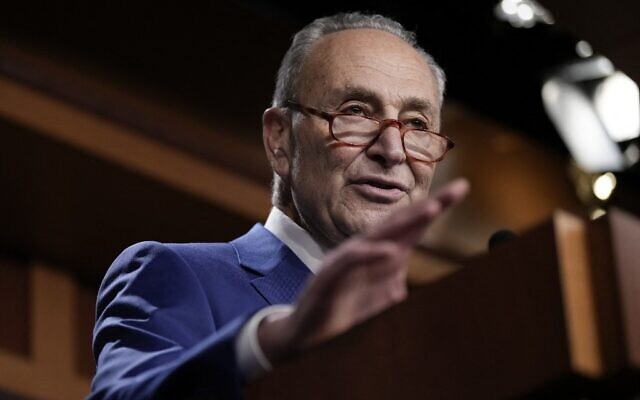 US Senate Majority Leader Chuck Schumer speaks during a news conference after passage of the Inflation Reduction Act at the US Capitol, August 7, 2022 in Washington, DC. (Drew Angerer/Getty Images/AFP)

But progressive Democrats long ago had to give up their ambitions for free preschool and community colleges and expanded health care for the elderly.

“Millions of seniors will continue to have rotten teeth and lack the dentures, hearing aids or eyeglasses that they deserve,” Sanders said from the Senate floor. “This bill, as currently written, does nothing to address it.”

But fellow Democrats, eager to pass the legislation ahead of November midterms when control of Congress is at stake, have rejected any change in the text.

To help offset the plan’s massive spending, it would reduce the US deficit through a new 15% minimum tax on companies with profits of $1 billion or more — a move targeting some that now pay far less.

That measure could generate more than $258 billion in tax receipts for the government over the next 10 years, by some estimates.