Wheelchair-using pensioner to be jailed for 2 unpaid parking tickets

A wheelchair-using man is expected to be jailed for two unpaid parking tickets.

Gregory Cherkasky, 74, is a father and grandfather and has resided in the coastal city of Ashdod for the past 30 years.

He is expected to serve five days in prison after refusing to pay two parking tickets that he claims were unjustified, Channel 12 reported Friday.

Cherkasky holds a parking permit that allows him to park his car in handicapped spaces for the disabled, the report said.

“I parked my car in a good spot, I think they issued the fine because there was a traffic island nearby,” he told Channel 12. The Ashdod Municipality said he parked in a way that blocked traffic and violated traffic rules.

Trying to avoid paying the fine, he asked to be tried in court. But the hearings were postponed and as time went by, the fines accrued late fees to the point that he was asked to pay double the original amount.

“I went to court three times in the past four months,” he said. “Because time passed between the hearings I was told that I need to pay a double fine. But it’s not my fault — it’s because they postponed the hearings.” 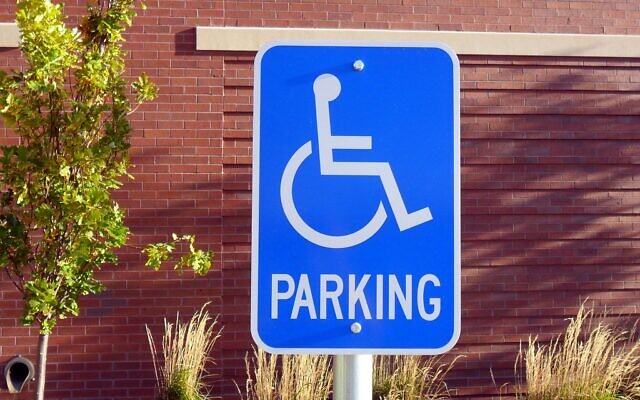 An illustrative photo of a handicapped parking sign. (CC BY 2.0)

Faced with a choice between a NIS 1,000 ($290) fine and a jail sentence, Cherkasky chose the latter.

“I went to the court secretariat and told them I don’t want to pay and would rather go to jail. I won’t pay because there’s no justice. Why should I pay double? Because they kept pushing back the trial? They’re to blame, I asked to be tried on time,” he said.

According to Israeli law, a person accused of a traffic violation may be asked to be tried within 30 days of receiving a fine. The law states that the amount of the original fine will not change until the trial is held.

“I’m waiting for them to tell me when I need to start my sentence. I’m very upset and disappointed… I’m bound to a wheelchair and can’t park in spaces not designated as disabled parking… I’ve been living in Ashdod for 30 years, I never expected the city to treat disabled people like this,” Cherkasky said.

Responding to the report, the Ashdod Municipality clarified that Cherkasky is accused of violating traffic rules on two separate occasions.

“While the court tends to be lenient with citizens in similar cases, especially those who hold a disabled permit… in this case, the judge agreed that [Cherkasky] had violated traffic rules, convicted him and ordered him to pay a NIS 1,000 fine or enter jail for five days,” the municipality said.

“Once the court reaches a verdict the municipality does not have the authority to decide otherwise,” it added.