Phase I of Exercise Tradewinds underway in St. Kitts and Nevis 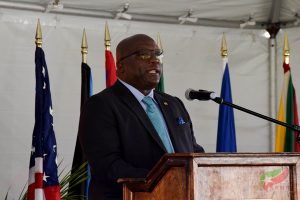 Phase I of Exercise Tradewinds underway in St. Kitts and Nevis

From the press unit in the Office of the Prime Minister

Exercise Tradewinds is a multi-national maritime security and disaster response exercise held annually in the Caribbean. Led by the United States Southern Command, it brings together defence and security partners from different countries to enhance the collective abilities of defense forces and constabularies to counter transnational organized crime and terrorism, and to conduct humanitarian assistance and disaster relief operations.

Prime Minister of St. Kitts and Nevis and Minister of National Security the Honourable Dr. Timothy Harris said he is particularly pleased to know that the training exercises, under Phase I of Tradewinds 2018, will enhance the region’s capacity to cooperate and respond to 21st century threats on land and on sea. “I have been assured that we can therefore expect training components or injects that reflect real world scenarios so that in the face of a real threat, our security forces and emergency response personnel will be able to coordinate seamlessly and in a manner and time that both meet international standards,” said Prime Minister Harris.

“This training, which is tailored for the region by the region and designed to bolster the internal security of the Caribbean, will cover disaster relief humanitarian assistance, and, of course, special security operations. Specifically, the training is designed to prepare participants to better plan for and respond to disasters, emergencies and threats such as a major natural or humanitarian disaster resulting from, for example, a devastating earthquake or a catastrophic hurricane, as several of our partner nations and St. Kitts and Nevis experienced last year in the form of hurricanes Irma and Maria.”

More than 500 military, law enforcement and civilian personnel from Regional Security System (RSS) member states, the wider CARICOM region, the Dominican Republic, the United States of America, the French Armed Forces, the United Kingdom and the Canada Armed Forces are present in St. Kitts and Nevis participating in the first phase of the training exercise.

Among those in attendance at Monday’s opening ceremony were the Governor-General, His Excellency Sir S.W. Tapley Seaton GCMG, CVO, QC, JP; members of the Federal Cabinet; as well as representatives of the diplomatic and consular corps, including US Ambassador to Barbados and the Eastern Caribbean Her Excellency Linda Taglialatela.

Phase II of Exercise Tradewinds will take place in the Bahamas June 13-21.

Pioli about 2:2 with Napoli: One point is a good result
Gattuso on Milan's penalty: the Rule needs to change. Jumping with your hands behind your back is another sport
Milan will offer 25 million euros for Celtic defender Ayer
Klopp on plans: Four years at Liverpool. After that, I want to do nothing for a year
Rogers Pro 1:4 with Bournemouth: Leicester play well only 45 minutes after the break
Inter and Roma are Interested in Garay
Liverpool want to sell Lovren, not let Him go as a free agent. Zenit are Interested in the player
Source http://www.thestkittsnevisobserver.com/local-news/phase-i-of-exercise-tradewinds-underway-in-st-kitts-and-nevis/

Costs of RUSVM Students Returning To St. Kitts Covered By the University Not the Government

RUSVM student’s costs covered by the university, not the government

Police Lineage Runs Deep In the Graduates of Course #44