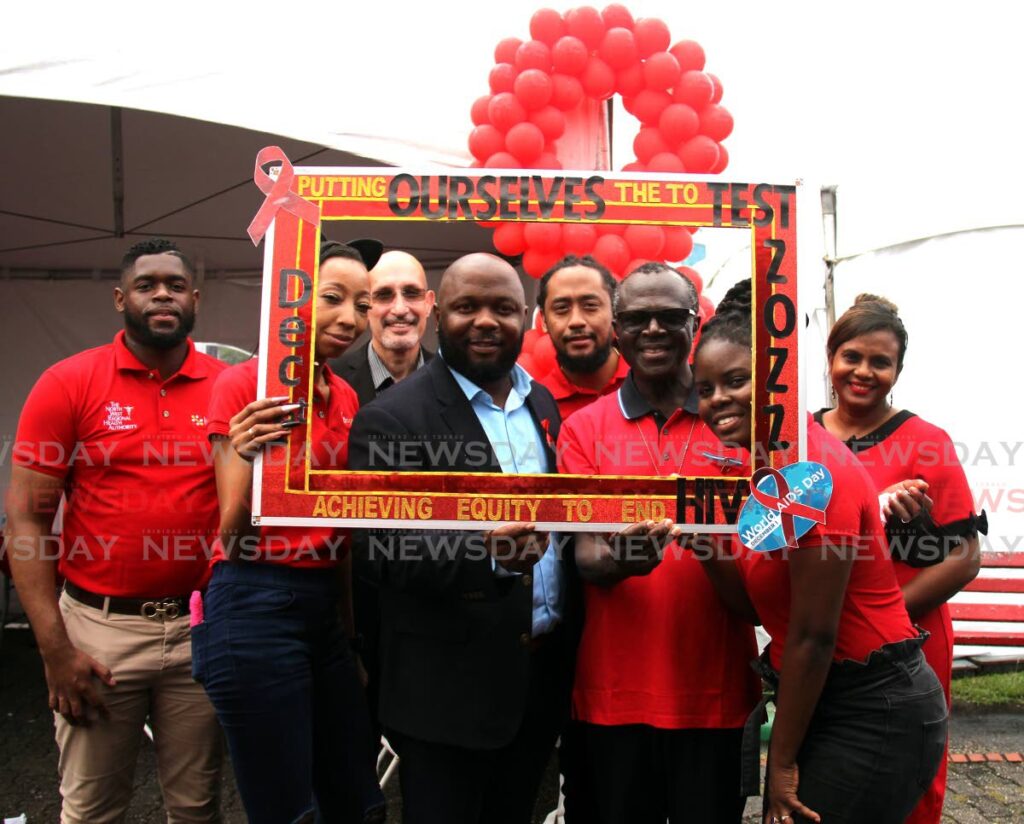 NWRHA acting CEO Anthony Blake, 3rd from left in photo frame, with members of the HIV/AIDS Co-ordinating Unit of the Ministry of Health at a fair along the Brian Lara Promenade in Port of Spain on Thursday. Photo by Ayanna Kinsale

SEVERAL people took the opportunity to get health tests including for HIV along the Brian Lara Promenade, Port of Spain on Thursday in the North West Regional Health Authority's (NWRHA) health fair to commemorate World AIDS Day.

Representatives of the TT Red Cross demonstrated the correct way to use male and female condoms, while NWRHA staff registered people for a slew of tests.

People in the square got their eyes tested. In between tests, the machines were sanitised. They got their blood sugar, cholesterol and blood pressure screened. They had their body-mass-index assessed and some signed up for HIV-testing.

Andrew Wayne, who was waiting to be tested for HIV, said, "The experience has been timely and punctual. Everyone knows where to go. Teamwork is awesome, I must commend the health authority for that.

Asked about the stigma, Wayne said, "When we have stigma against these things, it causes misinformation to be spread. When there is misinformation, people think they could never get this. In the early days, people thought it was only a gay people thing and straight people couldn't get it. It caused the increased spreading of HIV."

A woman in line said she was very comfortable to be tested in Independence Square. "Who see, see. Let them talk." She said she gets tested every three to six months.

"Doh think what people say. People will talk, and even if people talk, who knows they might be the carrier and yuh never know.

Dr Jonathan Edwards from the Medical Research Foundation said, "We are the largest centre in the country for the treatment of HIV patients.

"We're here to guide people whose HIV status is positive – show them how to access clinic, medications and give them facts about HIV – so they know, just because they have it, doesn't mean it's a death sentence, or the end of their world and it cannot be managed.

Edwards also explained post-exposure prophylaxis. Within 72 hours of exposure, people can be prescribed medication for 28 days that would prevent HIV infection.

Edwards said approximately 8,000 people are infected in TT, and the statistics were similar for gonorrhoea and syphilis.

Asked if 8,000 out of 1.3 million meant HIV was rare, Edwards said, " In theory you could get away with unprotected sex, but at the same time there are people who had unprotected sex once, or had one partner, and that partner gave it to them. We hear these stories everyday.

"Statistically, it's unlikely, but in reality statistics don't align with what happens everyday."

"The new saying is end AIDS by 2030. AIDS is an advanced stage of HIV. If people don't take their medication, the virus is out of control and that's when opportunistic infections step in. The theory is get everybody on medication so it doesn't progress to AIDS."