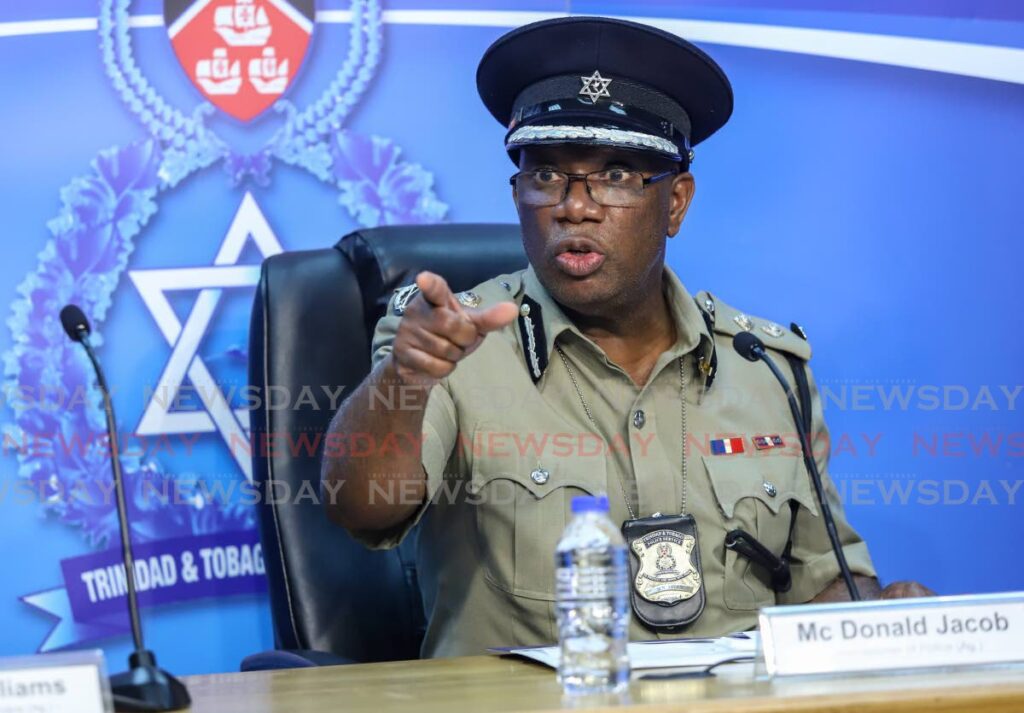 Brace for more roadblocks, stop and search and other inconveniences as the police unroll a series of measures to peg back criminals who have unleashed a torrent of violent crime targeting people in public areas.

Acting Commissioner of Police McDonald Jacob said on Tuesday a surge in violent crime, including murders, shootings and woundings, is as a result of gang rivalry. He said the police intend to flood the hotspots with more patrols to restore order.

At a news conference at the Police Administration Building in Port of Spain, Jacob said an additional 60 police officers have been called out to duty and all leave had been cancelled to get "more boots on the ground."

But he also lamented that the police service was hamstrung as it did not have sufficient vehicles, and pleaded with suppliers to honour the agreements to fit-out the vehicles with sirens, swivel lights and other accessories.

He said 43 of the 70 SUVs recently handed over only had half of the flashing blue swivel lights working. He said he also intended to direct more officers to wear the traditional grey and blue uniforms as more reports surface of people dressed in tactical uniforms resembling police uniforms.

"The executive of the police service is very much concerned about the rise and upsurge (of violent crime) that we are having in the country," he said, noting a new trend of gang members striking their enemies in public places such as nightclubs and sporting venues.

Jacob said specialised tactical units from the Inter-Agency Task Force, the Guard and Emergency Branch and personnel from the Defence Force have been assigned to ramp up patrols in high-crime areas and "zones of special concern."

He identified five policing divisions where police manpower has been doubled – Western, Port of Spain, North Eastern, Central and Southern – as statistics show a higher frequency of murders and gang-related activity.

He pleaded with the public to exercise patience as the police increase their activities in those areas "as we deal with this challenging situation in the country.

"We will in fact deal with the scourge that is taking place," he said, vowing to arrest more criminals and take them to court, and seize more illegal guns which are pouring in through legal ports of entry.

Jacob said 408 illegal guns have been seized for the year and 1,030 people charged with gun-related offences. In comparison, he said 61 high-powered weapons were seized in 2021 and already the police have confiscated 60 such guns in the less than eight months this year. He said in 21 shooting incidents, this year, with high-powered guns, 55 people were killed and 18 wounded.

"This is creating serious issues for us the police and the public."

In some instances, he said, innocent people are being shot and sometimes killed.

Jacob said the US Bureau of Alcohol, Tobacco and Firearms (ATF) has recently reinstated an office in TT and is working with local authorities to stem the flow of illegal guns entering at legitimate ports. He made reference to several seizures over the last two years where caches of assault rifles, handguns, ammunition and firearm components have been seized at local courier bonds in Piarco and Freeport. No one has been held for those matters as investigations are still underway.

He said the ATF is helping to trace the origins of the weapons and evidence points to several cities in the US including Miami, Georgia, Baltimore and Texas. As part of of the collaborative approach, he said a multi-border protection agency has been formed under the Ministry of National Security to gather intelligence and evidence with international agencies on gun trafficking.

Jacob said while the police will be relentless in its "hard approach" against criminals, it was also pursuing a "soft approach" thought various programmes to prevent young people from being influenced by criminal gangs.

To emphasise his point, he said last year 210 people between the ages of 16-34 were murdered, and this year 165 people in that same age bracket have been killed. A total of 55 people in that category were charged with murder last year, and 36 this year.

"We are more than losing a generation," he said, as he reiterated his plea for more organisations and individuals to join the fight to save the young people from getting swallowed up in the cycle of gang culture and violence.

Jacob said the police cannot do it alone and praised various government ministries, non-governmental organisations, faith-based organisations and other people who have come forward to help.

He said the establishment of 131 police youth clubs has made significant headway in keeping young people away from a life of crime and was encouraged by the results.

"We need to operate on both sides...prevention is better than the cure...we need to deal with the root causes of crime."

Jacob singled out the Ascension Football League in La Horquetta for helping bring a sense of pride to what was once a known criminal hotspot, and another football league in Moruga/St Mary's. Similarly, he said, a T-20 cricket competition in Princes Town was also having a positive effect.

"My spirit is telling me to say this, crime is everybody's business...I am asking people to come onboard."

He pleaded with fathers to play a greater role in their children's lives and also pay maintenance fees to support single mothers.

Without that financial support, he said, it was "creating an avenue for gang leaders to play a part in your child's life when they cannot get the base needs at their homes."

Jacob called on employers to urge fathers on their payroll who are not living up to their responsibilities to "mind your children" so that they do not end up being part of the crime problem in society.

He said even though some tools such as the denial of bail for certain violent offences expired on August 4, and now people accused of murder were getting bail, the police intended to do all it could to "turn around the (crime) situation in TT."

Acting Deputy Commissioner Wendell Williams, who is in charge of intelligence and investigations, said 90 people have been charged with gang-related offences between 2018-2022. He said there were 123 criminal gangs in operations and almost all communities were affected by them.

He said the rate of violence could have been worse had the police not targeted some people and interrupted more bloodshed and loss of lives. Williams said police also intend to target darkly-tinted vehicles which criminals are using to commit crimes even though the law governing tint is yet to be implemented.