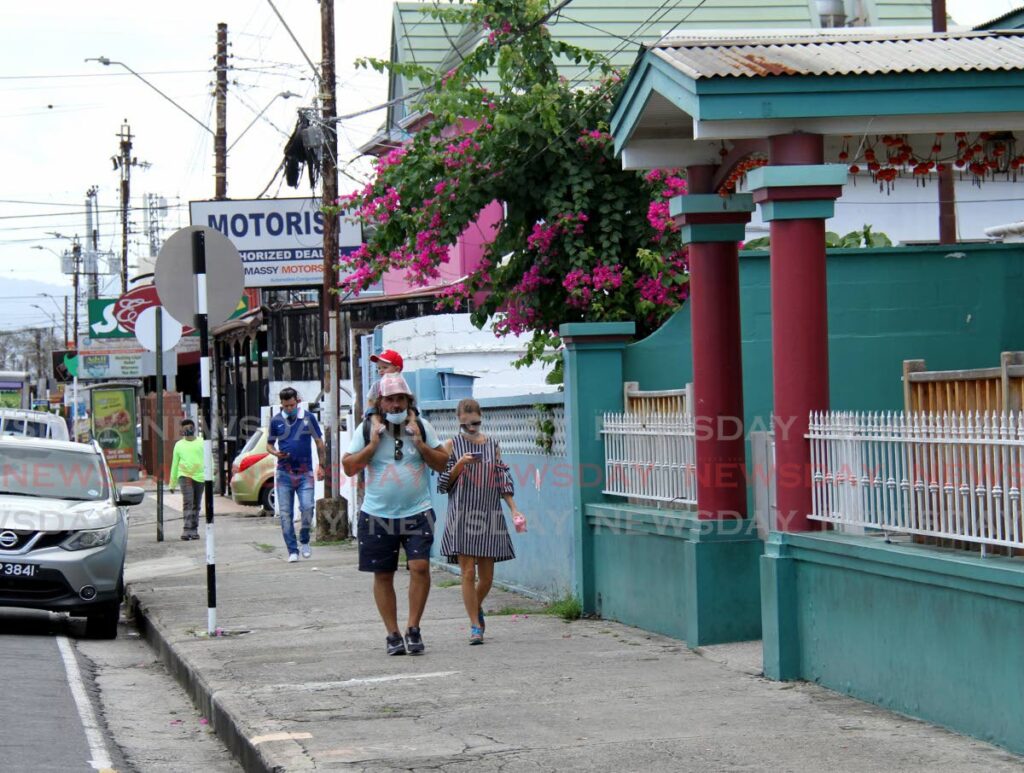 WOODBROOK residents are asking for more meaningful and convenient development that will preserve and complement the community’s historic value.

The 111-year-old community was sold to the Port of Spain Town Board in 1911. Its Victorian gingerbread cottages and the National Trust heritage site – the Lapeyrouse Cemetery – are the footprint of the area.

Of its 32 streets, the oldest ones are named after British generals.

From its rich history coming out of the Woodbrook Estate, owned by the Siegert family, who created Angostura bitters, it is also home to Mandela Park formerly known as George IV Park.

Over the years Woodbrook has been one of the fast developing communities in the country.

But within the last 20 years, it took on a new face by becoming the night-life entertainment hub of Port of Spain.

But the residents feel their community is not meant to be an entertainment hub.

While this change has revolutionised the area attracting more business activities, residents said they have been stifled by this ongoing expansion. 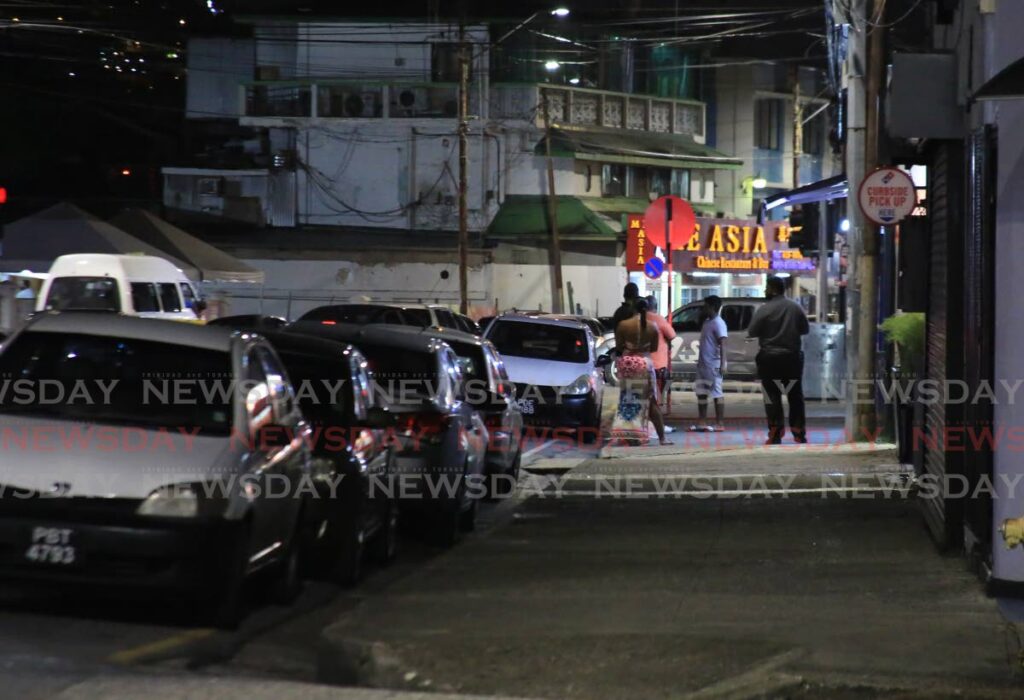 According to the residents, Woodbrook has been turning into “one big toilet” for patrons. They said issues of illegal parking have trapped them in their homes on several occasions. If they don’t have to deal with parking, issues with prostitution, the socially-displaced, robberies and excessive insults and harassment from patrons surface.

Every Sunday morning, their driveways are littered with faeces, garbage and vomit from partygoers from weekend activities.

Speaking to Sunday Newsday, they explained they have had enough and promised to do all in their power to return it to an unsullied state.

While they understand change is inevitable, they will not accept changes that will cost them their peace, comfort and security.

They deny they are against development but prefer to have proposals that improve the community.

Lynette Dolly, head of the Woodbrook Residents Committee, in an interview on Wednesday, said, “We grew up with business, but not what is happening on Ariapita Avenue.”

In the past, she said, Woodbrook businesses provided services that didn’t create nuisances.

“Take us forward. We have grown up, we are 60 years of independence. Let's show that we can have best practice if we want heritage tourism, and we can provide that.

“Those that left were forced out of our homes. We were terrorised by the nuisances and forced to sell.”

These issues started when the casinos arrived, Dolly said.

Soon after the problems were exacerbated when the bars and clubs were allowed to operate among residential homes.

The residents predict schools, century-old churches, and other essential services would be history and replaced by more bars and entertainment stops to fall in line with the vision of Tourism Minister Randall Mitchell and Port of Spain mayor Joel Martinez.

And because they are convinced the Judiciary, the Environmental Management Authority (EMA), Woodbrook’s business community, police and government have refused to acknowledge the level of stress and inconvenience currently being experienced.

In May the residents complained to the mayor, during the City’s Corporation’s monthly statutory meeting, of an increase in socially-displaced people taking up residence on the streets. Many of them have taken up space at Augustus Williams Park. Martinez said he is trying his best to deal with this problem and had called on the Ministry of Social Development and Family Services to play its part.

Last week, police revealed a new ring of car thieves targeting limers who park their vehicles along the side-streets of Ariapita Avenue.

They are disappointed that even after a series of consultations over the years, proposals that they believe could further interfere with their lives are being considered. 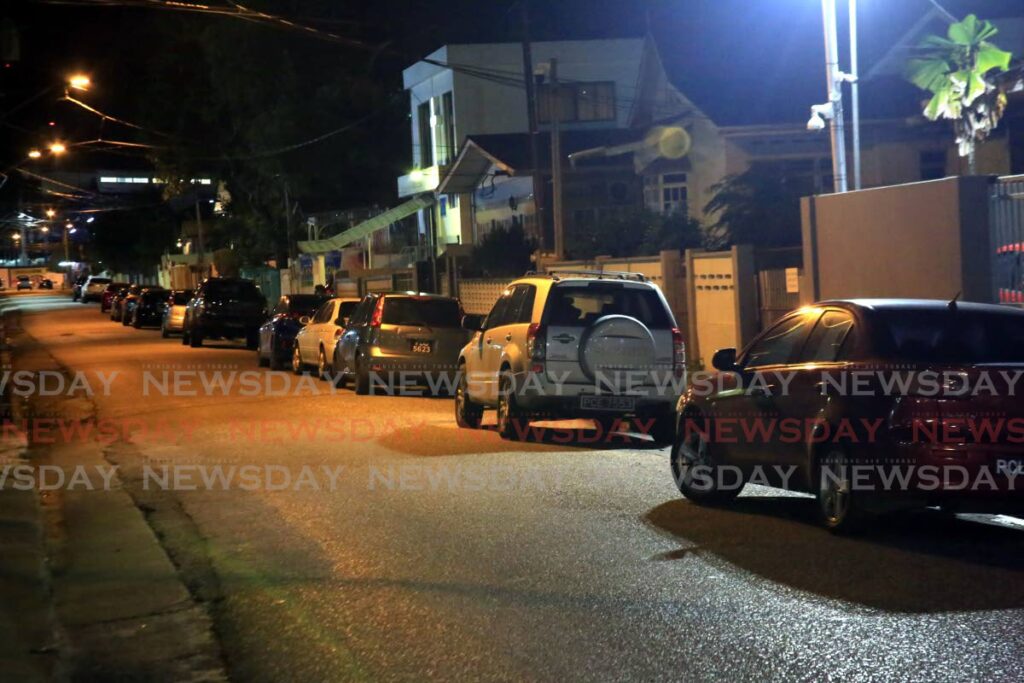 Cars parked in front of homes on Luis Street, off Ariapita Avenue, Woodbrook at night on July 28. - SUREASH CHOLAI

Committee member Cecile George called on the authorities to say what is the real intention behind the “epicentre” proposal. “What is the drive, desperation and determination to ‘evolve’ Woodbrook into this? Who is benefiting? We have gone so far in this desperation to be something other than what we are.”

One resident said she had to wait one hour before she could leave home.

She explained, “(I’ve) encountered trash discarded from cars parked along the street, used condoms, bottles, food boxes, prostitutes pee on the side walk between 6 am-8 am.”

Another resident, who wanted to be identified as Cynthia, described the entertainment plans as “ludicrous and will only bring more rogue elements into Woodbrook and frustrate residents more with the noise, illegal parking and blocking of driveways, destruction of properties, armed robbery and attacks and home invasions...”

“Bandits have come into my house with guns and beat up my family demanding money, despite having all kinds of security. My family has had to be hospitalised. All this is because we have all these activities on the avenue and all over Woodbrook.”

“I have had to ask cable, phone and electric companies to come and install back my lines because trucks pull down my wires at Carnival. Now, if we are having all this entertainment and promo trucks all year round, am I now going to be subjected to all-year-round disruption of essential services?"

“They should revive downtown Port of Spain and put the entertainment plans there and not on the avenue or any other part of Woodbrook. Put the Carnival in Chaguaramas – people could wine, gyrate, and make all the noise they want in the open in Chaguaramas and their urine and faces could fertilise the soil there.”

Antoinette, a retiree who only gave her first name, described what is happening as a punishment.

"Why punish us the residents of Woodbrook? We have to live with this every year. The noise, the crime, the inconvenience, the filth. Others come here for a few hours, then return to their safe, peaceful life for rest and rejuvenation.”

Another resident claimed limers have been throwing bottles on her home, damaging her gate and ringing her doorbell when they walk past between 2 am and 5 am.

The residents hope the mayor and minister consider all these factors before asking residents to accept his vision for their community.

They said such a proposal would better suit the Queen’s Park Savannah, downtown Port of Spain or Chaguaramas.

Their added frustration came following an announcement by Mitchell on July 26.

Speaking at Tribe Family of Bands’ SUNSETWKN (Sunset Weekend) launch along Ariapita Avenue, where soca king Machel Montano was given the key to the city; Mitchell said he wants to convert the avenue into a party strip.

This, he said, will allow for an entire month of weekend-long band launches which will attract regional and international tourists outside of Carnival while capturing the essence of Carnival and the culture of TT. The police, TT Promoters Association, Bar Owners Association and Carnival bands with headquarters in the area have all signalled their intentions to work closely with the residents to exist alongside each other comfortably.

On the issue of unbearable noise levels, the EMA told Sunday Newsday it is working to have noise pollution under control, not only in Woodbrook but throughout the country.

Via email, the EMA explained with the lifting of covid19 restrictions it has seen a marked increase in noise-related complaints, and the country is now back to pre-covid19 levels related to noise complaints.

The EMA said it has conducted and been invited to consultations hosted by the TTPS/Woodbrook community and the City Corporation in the past but is unaware of any consultations having been conducted concerning the Ariapita Avenue strip and a year-round Carnival/festival epicentre.

It said it strongly recommends extensive consultation with multiple stakeholders in this regard.

Most reports through the authority’s complaints hotline are noise-related.

It said an all-of-society approach is necessary to fight the scourge of noise pollution and is utilising a multi-pronged plan.

“This includes the recent strengthening of the legislative framework through the reduction in the monitoring timeframe for activities being undertaken with noise variation permits and ongoing dialogue with the police and TT Fete Promoters Association, and the TT Bar Owners Association.

The EMA is also conducting further reviews of the Noise Pollution Control Rules (NPCR) to help strengthen robust legislation. The authority is also embarking on an awareness drive.

It has noted numerous noise level complaints regarding bar and club owners.

“Considering this, the EMA has met and continues to seek proactive engagements with the TT Bar Owners Association to boost awareness levels of their membership.”

The EMA encourages citizens to call the police and report noise pollution from bars and clubs.

Under Section 70 of the Summary Offences Act any person who causes a nuisance to the public is liable to a fine of $1,500 or imprisonment for six months.

Following the meeting with the police in June to discuss a collaborative partnership to combat noise pollution, the EMA is presently preparing for future engagements with the service including training and capacity building on noise monitoring.

The prescribed limits under the Noise Pollution Control Rules:

Daytime limits: Monday to Sunday from 8 am to 8 pm daily:

Night-time limits: On Mondays to Sundays of every week from 8 pm to 8 am daily: