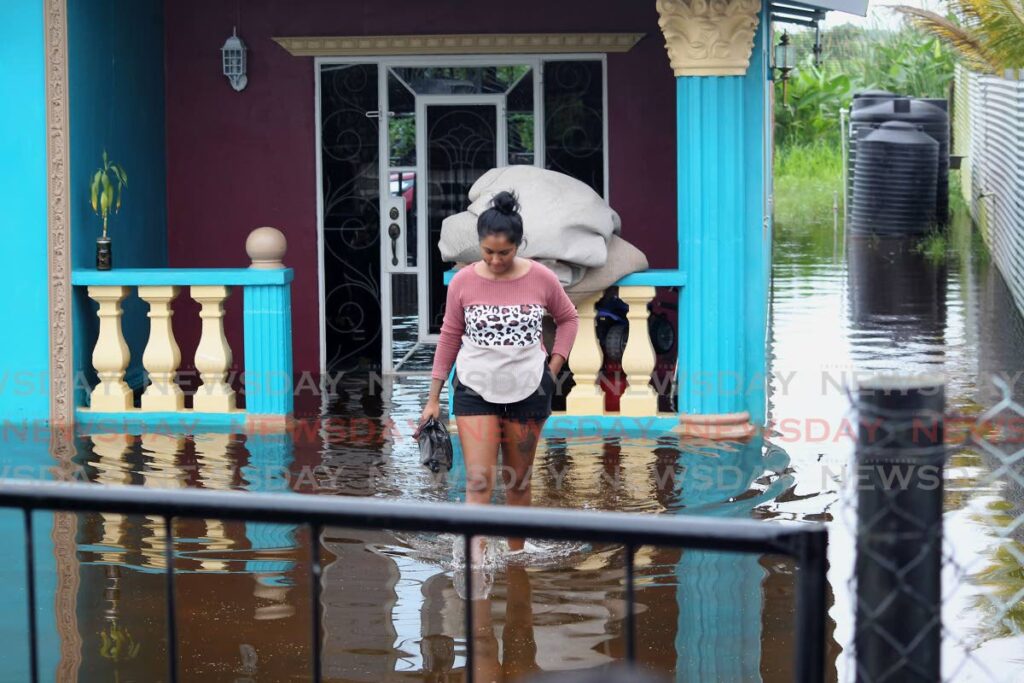 A resident of Pluck Road, Woodland wades through floodwaters in her yard after thundershowers on September 22. - FILE PHOTO/ROGER JACOB

THIS YEAR, millions have been driven from their homes by floods, fires or drought. Climate change has literally changed the face of the Earth. Mere days before Monday’s budget, the country was again placed on high alert as a particularly active hurricane season continues.

Yet you would not have been able to glean any of this from Finance Minister Colm Imbert’s speech. The phrase “climate change” appeared nowhere in his four-hour presentation. There was no mention of planning for natural disaster relief.

This is the context in which the Government’s suite of measures to encourage energy-sector activity arrives.

Last year, Mr Imbert had pledged the State would review the taxation regime applicable to oil and gas companies so that “the citizens of Trinidad get their fair share.” This year, Mr Imbert clarified exactly what was meant by “fair.”

“Favourable” is the word that comes to mind to describe the move to reduce the petroleum profits tax from 35 per cent to 30 per cent and to adjust the supplemental petroleum tax so that smaller producers and newer ventures are not as heavily penalised.

Such a move comes as countries all over the world debate proposals to make energy companies pay higher taxes, under the assumption that such companies are enjoying windfalls and have historically contributed to the climate crisis.

No one begrudges the energy sector’s desire for a more favourable regime that results in it having to pay more only when it earns more. (The latest measures this week were welcomed by the Energy Chamber.)

And the Government’s wish to use whatever resources we have to help us fund our needs is pragmatic.

But there is no reason why the State cannot pursue two things at once.

The problem is not that the Government seems to wish to appease the vested interests of big energy firms per se, it is that state officials have seemingly taken active steps to do so without showing similar fervour elsewhere.

“One of the daily editorials today criticised incentives to exploit oil and gas,” Minister of Energy Stuart Young wrote on Twitter on Tuesday. “Did the author miss what both the UK and US governments have done recently to encourage oil and gas production? TT needs to exploit its oil and gas responsibly.”

Part of acting responsibly, we contend, is acting in a balanced way, not just engaging in talks to bring continued investment to these shores, as the Government recently did after a tour of global energy firms.

It is good that Mr Imbert announced higher fees for oil polluters, plans for a green energy policy, various diversification proposals, and an emphasis on low carbon hydrogen activity.

But many feel we are long past the need for plans and proposals.

In the UK this week, protesters gathered outside of the Department for Business, Energy and Industrial Strategy to stand against numerous oil and gas projects. Meanwhile, over in the US, legislators have routinely criticised energy firms.

In the rapidly changing world we find ourselves in, a more balanced energy policy is not just preferable. It is essential.