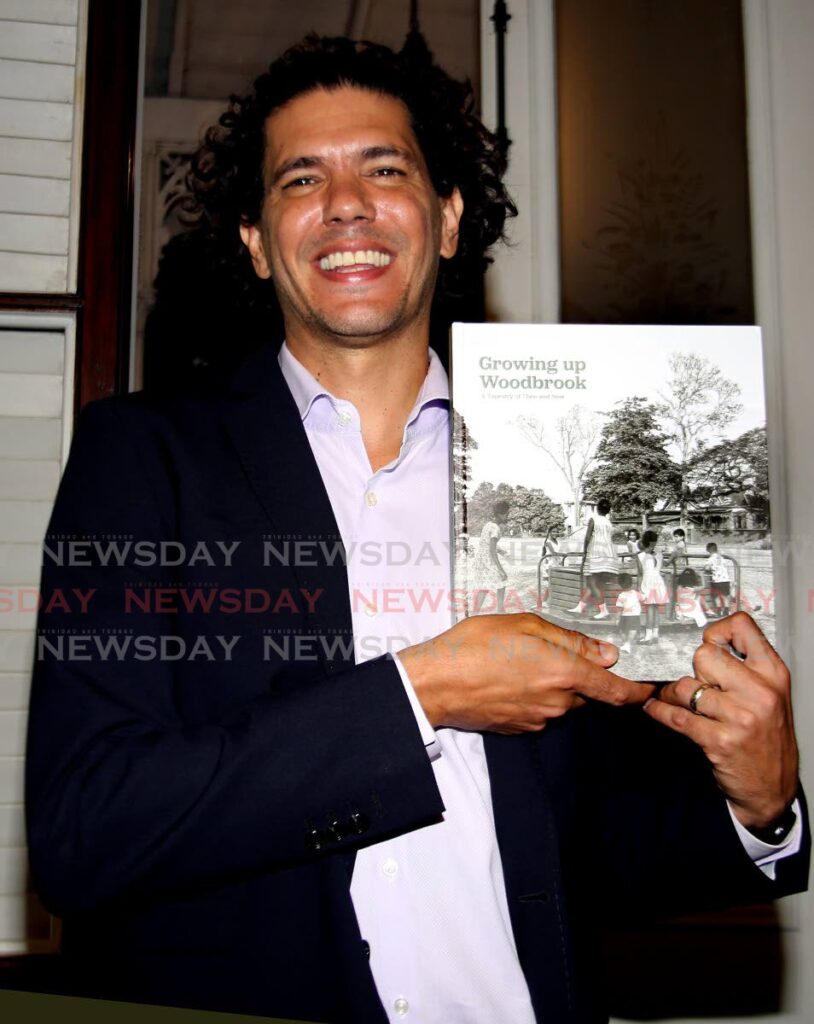 Dr Dylan Kerrigan with his book Growing up in Woodbrook which was launched at Mille Fleurs Heritage House, Queen’s Park West, Port of Spain, on Thursday. - SUREASH CHOLAI

TT is renowned for its harmonious diversity. We are a people of multiple heritages, religions, ethnicities, united by our shared spaces, shared histories and shared values. If one wished to experience a particular aspect or element of our mosaic – Hosay or Ramleela or Shango – you could go to a particular place on one or other island to do so.

But if you wanted one place which encapsulates what our harmonious diversity looks and feels like, you would probably go to Woodbrook!

This is the striking effect of the wonderful compendium of stories and histories produced in Growing Up Woodbrook: A Tapestry of Then and Now. Produced by the Woodbrook Residents Committee and authored by UWI anthropologist Dr Dylan Kerrigan, with Ken Jaikaransingh, this book traces the origins of Woodbrook from a sugar estate on the outskirts of Port of Spain to a middle-class residential community, then to today’s residential-cum-commercial district.

The project of producing this book was long in the making and was slowed, but not stopped, by the covid19 pandemic. It involved many hands and many minds, including those of Lynette Dolly, Miguel Browne and Wendy Sealy, who helped collect and research the stories. 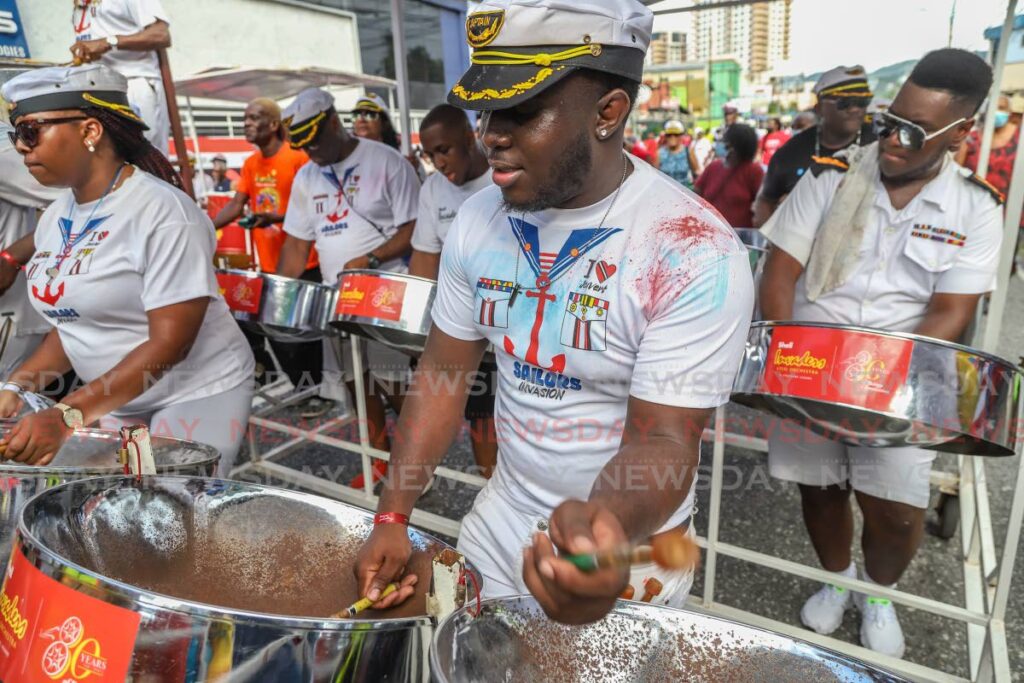 Shell Invaders' J'Ouvert sailor mas parade in Woodbrook to commerorate Republic Day on September 24. Invaders is one of the bands that emerged out of Woodbrook in the 1950s and 1960s. - JEFF K MAYERS

What made the Woodbrook community unique, yet paradigmatic in the TT social landscape, is its geographical location adjacent to the capital city and the fact that its growth and development, as a well-laid-out middle-class town, with parks and squares and its own architecture, attracted Trinidadians of every ethnicity – people of African, Indian, European, Chinese and Middle Eastern descent, and mixtures of these.

The urban upper class was domiciled in upscale St Clair to the north, and across the city centre to the east, the older lower-class towns of Laventille and Belmont had long been established. Woodbrook emerged in the early 20th century, when the Siegert family sold the estate to the Port of Spain Council.

The list of people who grew up or lived in Woodbrook at some time in their careers is astonishing. A veritable Who’s Who of TT, it includes Eric Williams, Rudranath Capildeo, VS Naipaul, Victor Bryan, Audrey Jeffers, George Bailey and many others whose biographies appear in the book.

This would have been impressive enough, but Growing Up Woodbrook argues that the place, because it attracted people of every ethnicity who collectively embraced a certain ethos and set of values, became a crucible of “creolisation,” which as George Lamming described it, is “…an open-ended process of collective self-definition and deepening indigenisation.” Creolisation is open to multiple influences, but, importantly, absorbs those influences and produces to the world something new and different.

So it is no surprise that Beryl McBurnie would found the now iconic Little Carib Theatre in her backyard on Roberts Street, bringing folk dance to respect and even prominence, or that the legendary mas camps of George, Albert and Alvin Bailey, Stephen and Elsie Lee Heung and Raoul Garib, which redefined mas in the 1950s and 1960s, would have emerged from there, or that Invaders steelband, with Ellie Mannette’s innovations, made its home there. 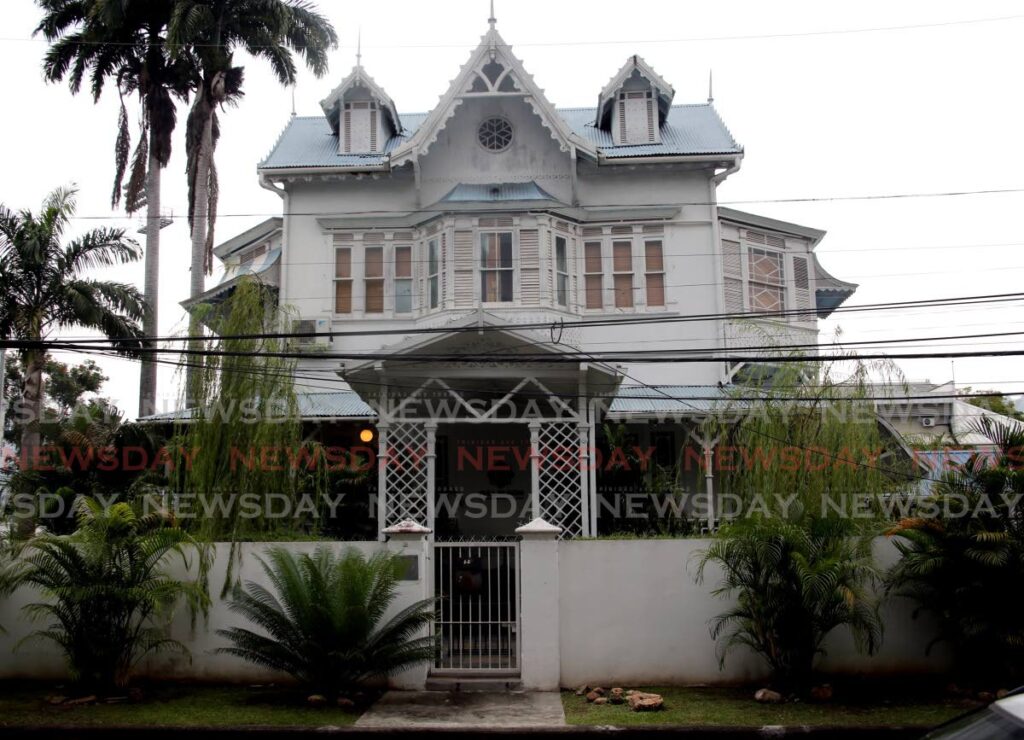 It would be no exaggeration to say that every year, Carnival and J’Ouvert really kicked off with the first notes of Invaders steelband on Tragarete Road. VS Naipaul’s classic novel Miguel Street was inspired by his time spent on Luis Street. Pat Bishop would transform classical music to the steelpan instrument and to the rhythms of calypso, and Andre Tanker would invent new rhythms influenced by jazz, calypso and African music. It is par for the course that Johan Chuckaree, great-grandson of immigrants indentured to the Woodbrook estate, would emerge as one of our finest pannists today.

With wide streets, several parks and playgrounds, the Woodbrook Youth Centre, and easy access to the Savannah, King George V (Mandela) Park and the Oval, Woodbrook has produced more than its fair share of national sportsmen and women in football, cricket, netball and table tennis. As Growing Up Woodbrook points out, sporting activity, like the arts and culture, helped to foster strong community identity and competitive spirit. 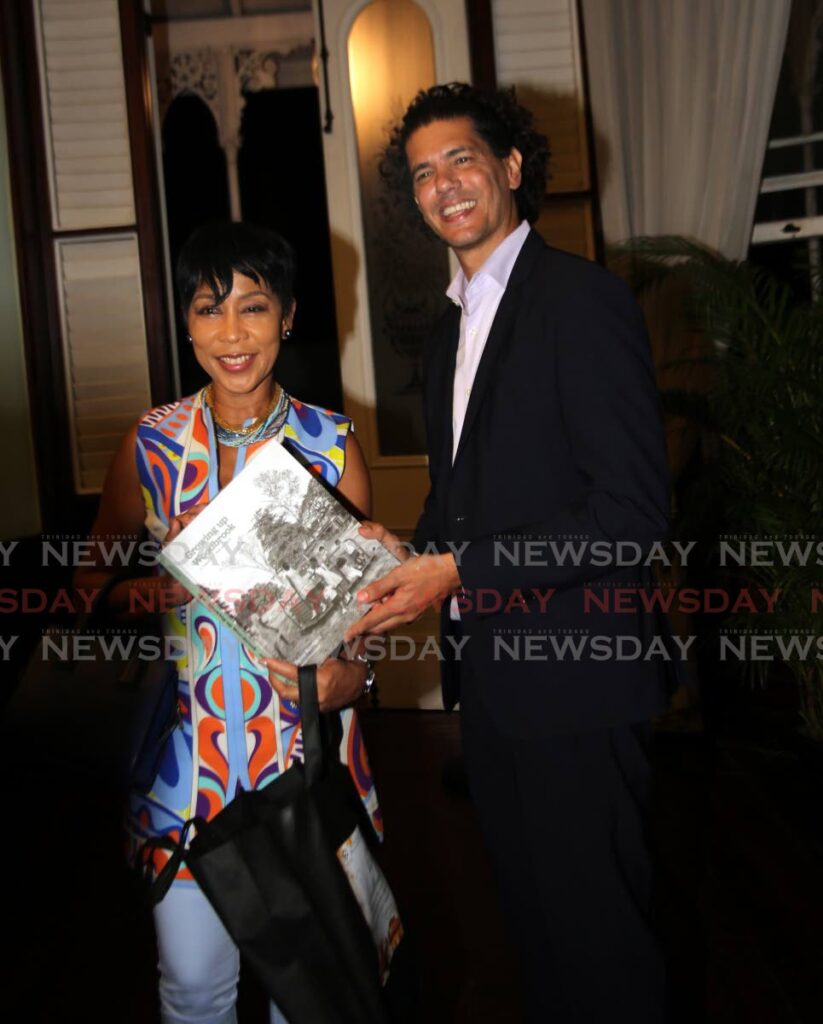 Sharon Rowley, wife of the Prime Minister, receives a copy of Growing Up in Woodbrook from Dr Dylan Kerrigan during the book launch, at Mille Fleurs Heritage House, Queen’s Park West, Port of Spain on Thursday. - SUREASH CHOLAI

Growing Up Woodbrook also grapples with the contemporary forces which have been reshaping the community. Second- and third-generation Woodbrookians migrated out to suburbs further away, and as the resident population aged and homes were sold, more and more commercial activity entered the community as small offices or restaurants and bars, especially on Ariapita Avenue. A large number of mas camps are now located in Woodbrook.

These developments, largely unplanned, have transformed Woodbrook, though not always for the better. They have brought more traffic, more noise at night, and more crime, unsettling the now aged residents who remain. Woodbrook seems to be threatened with the same fate as central Port of Spain and Newtown before it.

However, Growing Up Woodbrook offers an alternative to the threat of terminal decline and decrepitude.

The Woodbrook Residents Committee envisions a district which treasures and preserves its histories through museums, organised cultural tours and activities celebrating the district’s Carnival arts and its music and dance, a waterfront park, and the sale of street foods, all provided in a safe, friendly and secure environment.

This is a compelling vision, one that embraces creolisation and commercialises its unique products to the advantage of property owners and the society as a whole.

Growing Up Woodbrook is required reading for all those whose families lived there or were connected to the place, because it documents and preserves their roots and the ethos and values their parents and grandparents lived by, often through their voices. 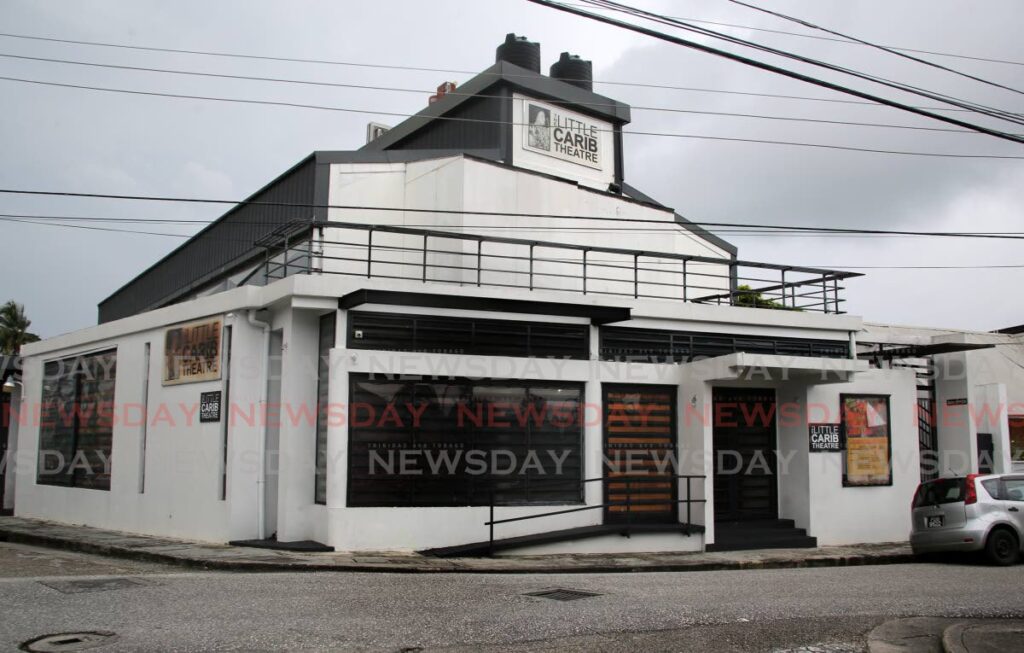 The Little Carib Theatre in Woodbrook remains a bedrock of TT culture and a legacy of its founder Beryl McBurnie. - SUREASH CHOLAI

Growing Up Woodbrook is also inspirational. As Bridget Brereton points out in the foreword, micro-histories are as important as the larger national or “macro-historical” works. They help to give real shape and content to those larger histories, and people and places come to life.

So hopefully, this excellent book on Woodbrook will inspire other communities to document their own histories and show how they contributed to the development of TT today.

Dr Kerrigan and the Woodbrook Residents Committee deserve our praise and gratitude for producing this excellent piece of work.