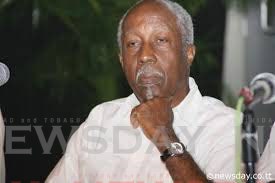 Retired head of the public service Reginald Dumas wants trade unionists to say what is their counterproposal to the four per cent being offered by the government to public-sector workers for the period 2014 to 2019.

The Amalgamated Workers Union has already accepted the offer.

Public Services Association (PSA) president Leroy Baptiste said last week, “The figures Imbert has touted as to what it would cost to settle negotiations with the PSA is an increase in the annual expenditure of $500 million and the total back pay to settle with my people is $2.4 billion up to June 2023.

“I am comfortable with that. Tell the minister I want to sign that. Forget the four per cent offer. I want it in black and white.”

Baptiste said he wanted to be clear that the union did not accept the four per cent offer, but would have been “quite willing” to accept the figures quoted by Imbert since those figures, “if divided equally among our $15,000 members, worked out to an average increase of approximately $2,800 monthly per worker and, to each of them, $160,000 in backpay.

He accused Imbert of presenting “outlandish figures” which had the effect of misleading people and the further demonisation of public officers.

The other major trade unions are also still rejecting the four per cent.

In his 2023 budget presentation on Monday, Finance Minister Colm Imbert said the government could not afford to offer public sector workers more than four per cent at this time. He is hopeful trade unions will eventually accept it.

On Friday, Dumas told Newsday, “The government is saying it cannot afford more than a four per cent increase with backpay.

“The unions have put their noses up in the air and said they reject it. But I have not heard, seen or read any counter proposals.”

He added, “If you do not want the four per cent and you want more money, indicate to us where this money coming from, not only now to pay yuh backpay, but to pay you down the road as well, because once yuh salary gone up, it gone up.

“So you are getting backpay for a number of years, increased salary down the road, which will lead to increased pensions as well. Where is this money coming from?”

Dumas said he is by no means attacking the trade unions, “But I just want to hear from them what proposals they have for the country to meet the increased salaries.”

Dumas said once salaries increase, the merchants will inevitably raise their prices on goods and services.

Dumas said while trade union leaders are free to march and protest as it is all part of the democratic process, they must also be mindful of the country's economic circumstances. He said the country is still reeling from the effects of covid19 over the past two and a half years.