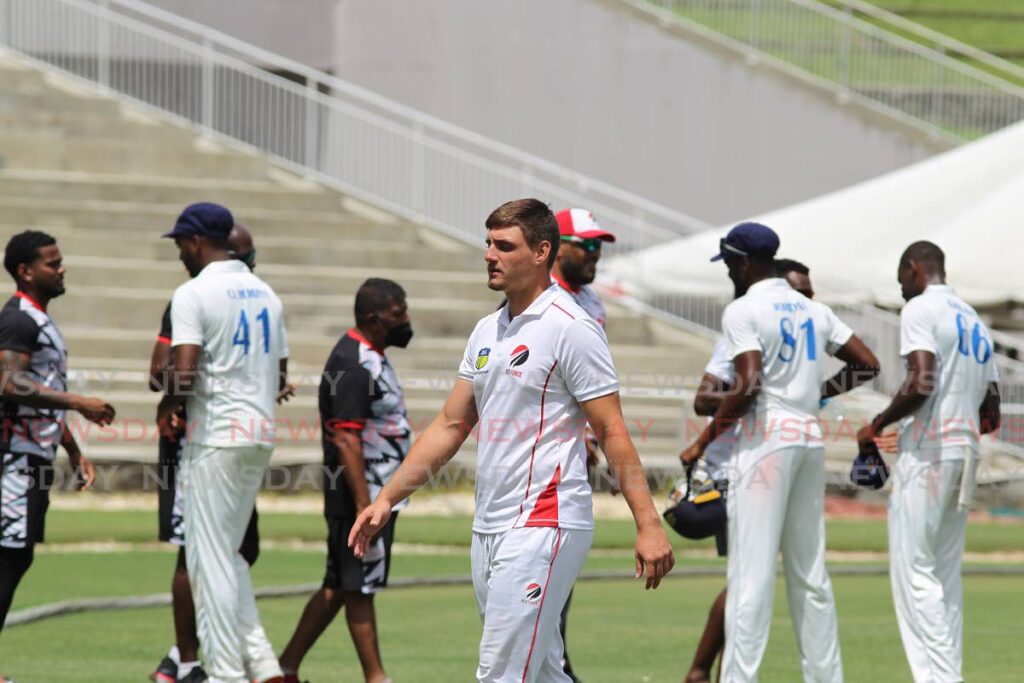 Red Force batsman and wicketkeeper, Joshua Da Silva (C) walks off the field in disappointment as his team lost to the Barbados Pride in the West Indies Four-Day Championship match, at the Brian Lara Cricket Academy stadium in Tarouba on Friday. - Marvin Hamilton

The hosts were routed in three days at the Brian Lara Cricket Academy, Tarouba, and are now out of the title race. TT’s regional four-day trophy drought now extends to 16 years since they last won the tournament in 2006.

After a mediocre first innings stance of 133, with Red Force skipper Imran Khan (29) top scoring, Barbados were dismissed for 294 but held an important lead of 161 runs. Fast bowler Terrance Hinds’ maiden first-class five-for was the only real highlight for TT.

Sent back in to bat, the TT team, once again, failed to construct sturdy batting partnerships and were easily removed for a paltry 139. Here, Yannic Cariah finished unbeaten on 35 with opener Keagan Simmons (31), the only other real contributor.

Barbados’ in-form bowling attack, partnered with TT’s dismal batting display, spelt disaster for Red Force. The result, however, cemented defending champions Barbados atop the standings and could see them lift the 2022 crown with one round left to play.

Furlonge was furious and gave his team’s batting performance a low rating.

“I rate it as poor. I don’t think there’s any other word that’s worst than poor. In the last game (against Leewards), we didn’t have the patience to bat or bowl. This game here we got out to some poor, amateurish shots.

“We’ll have to do hard work and see how we can come in the next game. It’s not a matter that we couldn’t handle the (Barbados) bowling but it’s that we played poor shots. When you go through the batting line-up, one to six, we played poor shots,” he said.

When Red Force resumed day three, they were struggling at 51/3 and trailing by 110 runs with Keagan Simmons (26 not out) and Jason Mohammed (six not out) in the middle.

The objective, Furlonge said was for the pair to bat until lunch and then assess how they would move forward during the break. Sadly, TT lost both batsmen and key player Joshua Da Silva before lunch, and the remaining four were destroyed in under an hour after lunch.

“We would have taken it from there (post-lunch); look at the other session and hopefully, if we could have batted out the day.

With the batsmen we have there, we scored at a rate of 3.5 (runs per over) so probably we would have been 300 runs plus and then bat again tomorrow (Saturday). But you could make the best plans in the world, and to execute the plans, we faltered,” he added.

Red Force had a positive start to the four-day tourney as they beat Jamaica Scorpions by three wickets in their opening fixture and then followed up with an innings and 43-run triumph over Windward Islands Hurricanes.

However, a ten-week break to facilitate England’s tour of the West Indies saw several of TT’s players compete in an array of domestic T10 and T20 competitions.

When they resumed their four-day campaign against Leeward Islands Hurricanes in mid-May, batting displays declined significantly as TT tallied 140 and 271 in their first and second innings respectively.

Cariah topped the batting with his fifth first-class century while Da Silva (65), Mohammed (36) and number nine batsman Jayden Seales (33) were the main contributors in both innings.

When asked if the break may have caused a dip form, Furlonge said this may have also been a contributing factor.

“There are many reasons but we’re not looking for excuses. People will say it’s the T20s and T10s so probably preparation was part of it. But to me, professional players are supposed to switch from both formats of the game.

“But we have to go back and work with the analysts and see what players (are doing). We’ll have to look at that, have a talk this evening (Friday) and see the players’ commitment,” he added.

With the title beyond reach and their final match against Guyana Harpy Eagles set to bowl off at Queen’s Park Oval, Port of Spain on Wednesday, Furlonge said the squad will reflect on their past two performances and work towards ending the tournament with a win.

“We still have to play for pride, the insignia of the Red Force and the country, so we will come out next game, give our all and see how we could improve before the next game. We need to get the openers putting on and building partnerships and we’ll see how we can go from there.”

When asked if there would be any changes in the team for the Guyana clash, Furlonge replied, “I cannot say that because there are three others selectors. I don’t want to say ‘yes’ and then get berated to say how I could make a statement like that. It’s up to the selectors to make a decision.