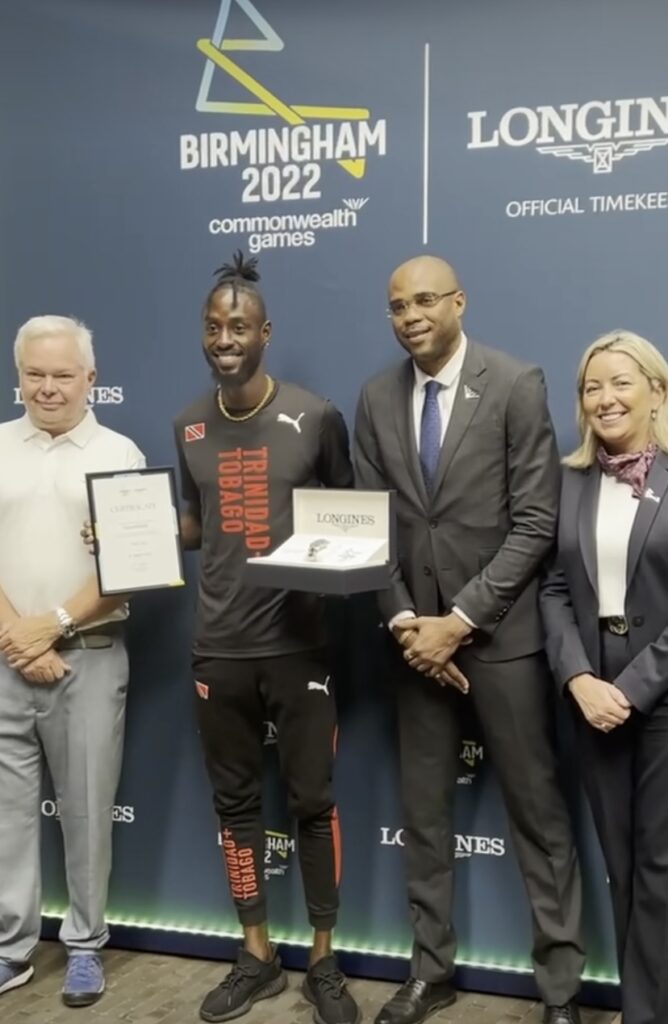 In this screengrab from a video posted to TT track and field athlete Jereem Richards' Facebook page, Richards receives a commemorative timepiece and certificate for breaking the men’s 200-metre games record at the 2022 Birmingham Commonwealth Games.

On Saturday, Richards won the 200m race in 19.80 seconds to erase the previous Commonwealth Games record of 19.97, held by Frankie Fredericks of Namibia since 1994.

It was also a personal best for Richards, as he lowered his mark of 19.83.

In a ceremony in Birmingham, Richards said defending his 200m Commonwealth Games title has been on his mind since his victory four years ago.

“I have actually been thinking about it since (the Commonwealth Games in) Gold Coast in 2018,” Richards said.

“I know that I would have to come here and defend the title…it is just a blessing to be able to defend it and to even run a games record to break the great Frankie Fredericks’s record. It is something exceptional.”

He is elated to be in the “history books.”

Richards remembered former TT athlete Deon Lendore, saying, “That (relay) was definitely something very special for us. We lost a team-mate this year in January – the great Deon Lendore. That was a big blow for TT and to just go out there and make him proud and keep the 4x4 spirit of TT alive and show them we are still a force to be reckoned with in the 4x4 was something very important.”

Lendore, 29, died in a car accident in January in Texas, US. He was one of this country’s best 400m runners.

Richards said, “May his soul rest in peace and may he always be remembered.”