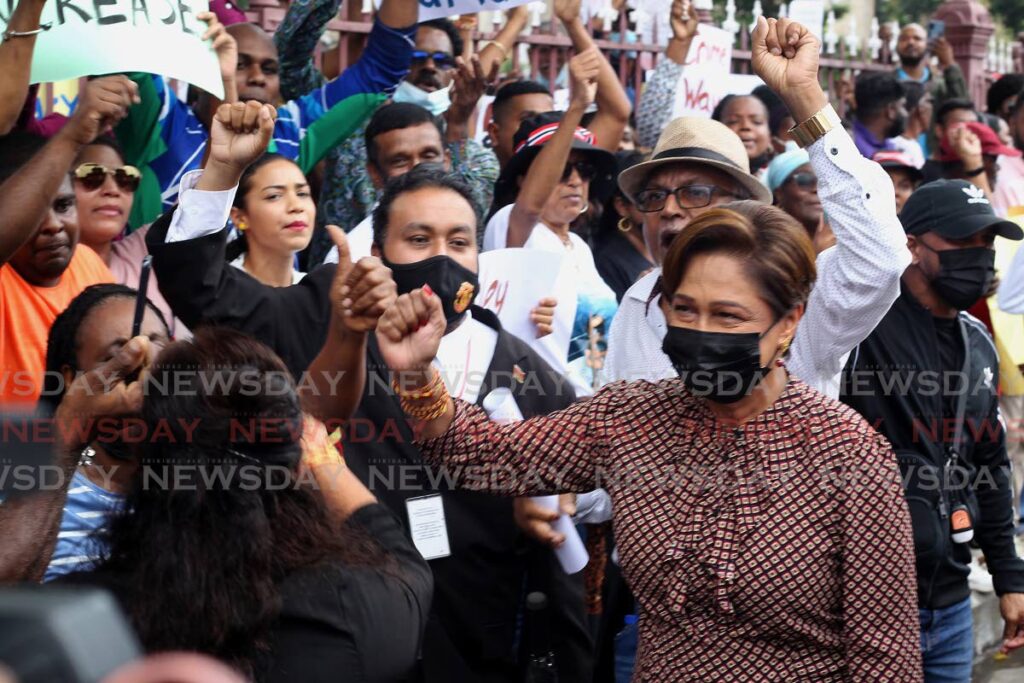 Opposition Leader Kamla Persad-Bissessar greets supporters on her arrival at Parliament to open the budget debate on Friday. - ROGER JACOB

OPPOSITION Leader Kamla Persad-Bissessar claimed that the Prime Minister's bitterness has blinded him to the plight of poor and working class people in TT.

She made this claim in a statement on Saturday in response to comments made by Dr Rowley at a PNM meeting in Mt Hope on Friday. Persad-Bissessar also demanded that the Government withdraw the budget immediately.

After describing the 2022/2023 budget as an evil attack on the poor and working class, Persad-Bissessar said, "Not content with this act of evil perpetrated on the population on Monday, Keith Rowley last night chose to spew bitterness, hate and behave like a man totally out of control. "

She claimed that Rowley spent two hours at that meeting, insulting many people, including her.

"I ask Keith Rowley to stop being bitter, insulting and hateful to anyone who has a differing opinion, view or idea from his own. Last night he appeared completely blinded to the reality of the suffering of the poor and working class."

Persad-Bissessar said the behaviour which Rowley displayed "was beneath the dignity of the office of the Prime Minister."

She believed Rowley was unhappy with himself and is just taking it out on other people, including her.

"I hold no personal animosity toward him. However, he is no ordinary citizen and the results of his behaviour are having destructive effects on the livelihoods of many citizens."

Persad-Bissessar appealed to Rowley and the Government to be better, instead of bitter towards the poor and working class.

Rowley said Persad-Bissessar budget response in Parliament on Friday was one of the "worst performances" he had seen in a debate.

He reminded the audience of deals her People's Partnership administration made with energy firms which he and his government had to renegotiate.