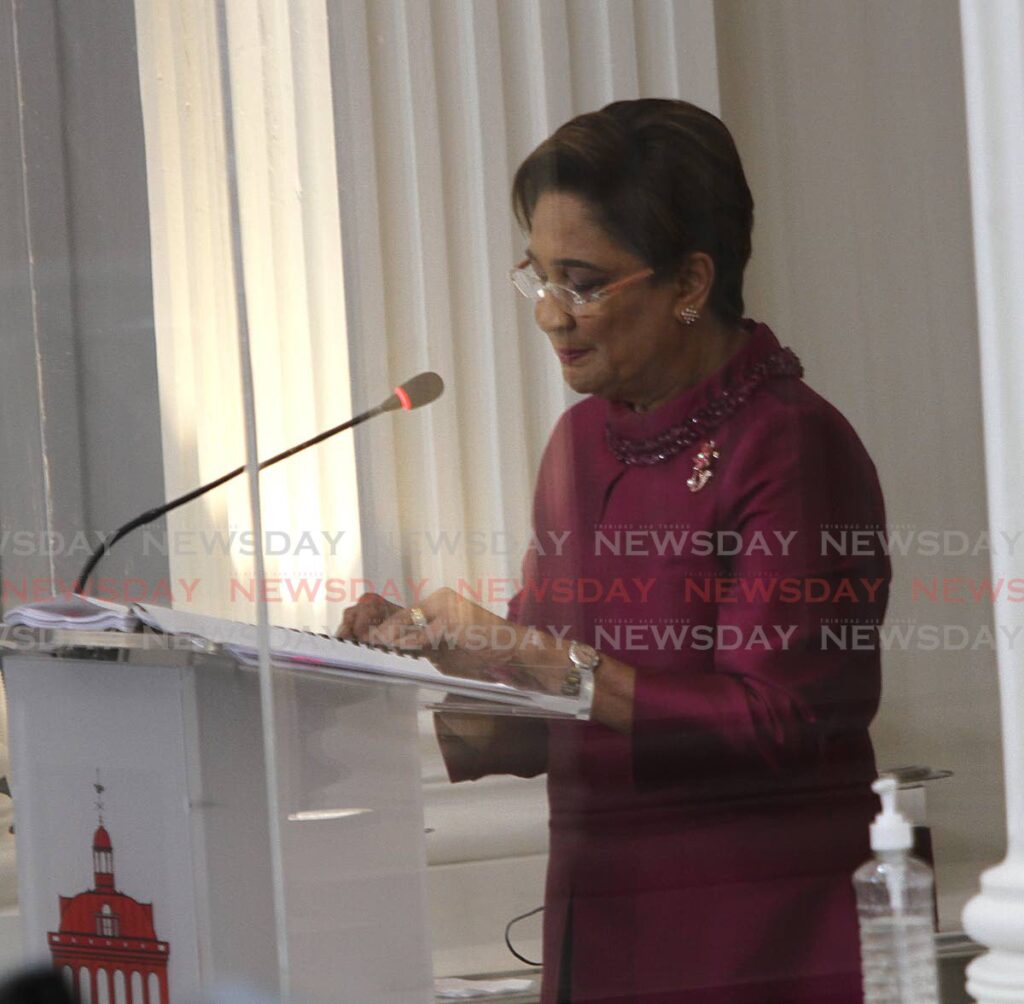 Opposition Leader Kamla Persad-Bissessar gives her response to the 2022/2023 budget on Friday in the House of Representatives. -Photo by Angelo Marcelle

She made these the cornerstone of a UNC government's economic recovery plan as she responded to the budget in the House of Representatives on Friday.

Accusing the PNM Government of dubious figures and a budget that was a "charade and sham" that failed country and citizens. She said the budget brought no hope or plan to grow the economy.

Persad-Bissessar said the Prime Minister's call to "stay the course" would take TT straight to disaster. She promised a UNC government would steer the country into calm waters.

She offered five pillars to restore the economy, including re-opening the refinery to regain energy security.

"We believe Government must re-examine its plan and we are proposing to restart a reformed Pointe-a-Pierre oil refinery.

"By re-opening Petrotrin, we will have greater fuel security, save foreign exchange, provide meaningful jobs and ensure the company continues to contribute to the Treasury," the Siparia MP said.

She also proposed a solar energy park at Tamana and recycling parks in north Trinidad.

"We believe there must be a jump-start to our agriculture sector by leasing 25,000 acres of former Caroni lands to create agricultural parks, while spending at least ten per cent of the PSIP (public sector investment programme) to develop agricultural access roads, irrigation and drainage for agricultural parks.

"We will also incentivise the private sector to establish an agro-processing plant in Couva," she said.

Earlier in her response, she said the budget's tax break was too small "for a worker to buy even a doubles." She proposed to ease the tax burden on citizens and businesses post-covid19.

"We will simplify the personal and corporate income tax regime, simplify the VAT regime," she said, "remove more basic food items from the VAT net, and improve the efficiency of the tax-collection system by strengthening the Board of Inland Revenue, the VAT office and Customs and Excise."

She promised a sugar cane growing and refining industry via a Brechin Castle agro-processing complex and sugar manufacturing facility.

Port of Spain will get a port revitalisation, creative arts area and steelpan manufacturing facility.

She mooted Tobago as a duty-free shopping zone, including a Plymouth cruise ship complex/marina.

These prosperity engines will mobilise the private sector, she said, with large multiplier effects to kick-start recovery.

She promised to lead a caring and hard-working government.

"We cannot go on this way. Our country and our people deserve better." To boost healthcare, she vowed longer clinic hours, a patients charter and a re-launched Children's Life Fund.

She said a UNC government would enact procurement reform. The property tax should be withdrawn, she said. Persad-Bissessar warned against the national statistical institute board being politically appointed if replacing the Central Statistical Office, and the TT revenue authority would lack the independence of the Board of Inland Revenue.

Saying despite being in office for seven years, Persad-Bissessar damned the Government as being manned by clearly "incompetent and unqualified people."

Listing rises in a basket of food items, she warned of more rises of one to three per cent because of the increase in fuel prices announced on Monday by Finance Minister Colm Imbert, even in the stark reality of a sharp fall in people's standard of living.

The one-off $1,000 fuel grant to those on social grants, would fill a car's fuel tank – at the most – thrice, she scoffed.

Persad-Bissessar alleged a 68 per cent drop in GATE enrolment and lamented a deafening silence on promises to regularise nurses' job status. The Government, she claimed, has created no new meaningful jobs, and relies heavily on borrowings.

Persad-Bissessar marvelled that Imbert had boldly and publicly admitted to exceeding government's overdraft limit. She alleged he had borrowed $7 billion which he did not state in his budget speech on Monday – and planned to borrowed $8 billion more.

Persad-Bissessar asked Imbert to state the size of the Heritage and Stabilisation Fund (HSF).

She said the budget's incentives would not work – for energy exploration, hiring apprentices (amid a halving of OJT enrollees) and getting smaller companies into renewable energy ventures.

Budget documents, she said, revealed the Government envisaged netting $40 billion in taxation revenue. She scoffed that troubled TSTT was the government's strategic partner in digitisation.

Saying oil hit US$83 on Friday, she asked if he had deliberately set the budget at an unrealistic US$90 to avoid payments into the HSF.