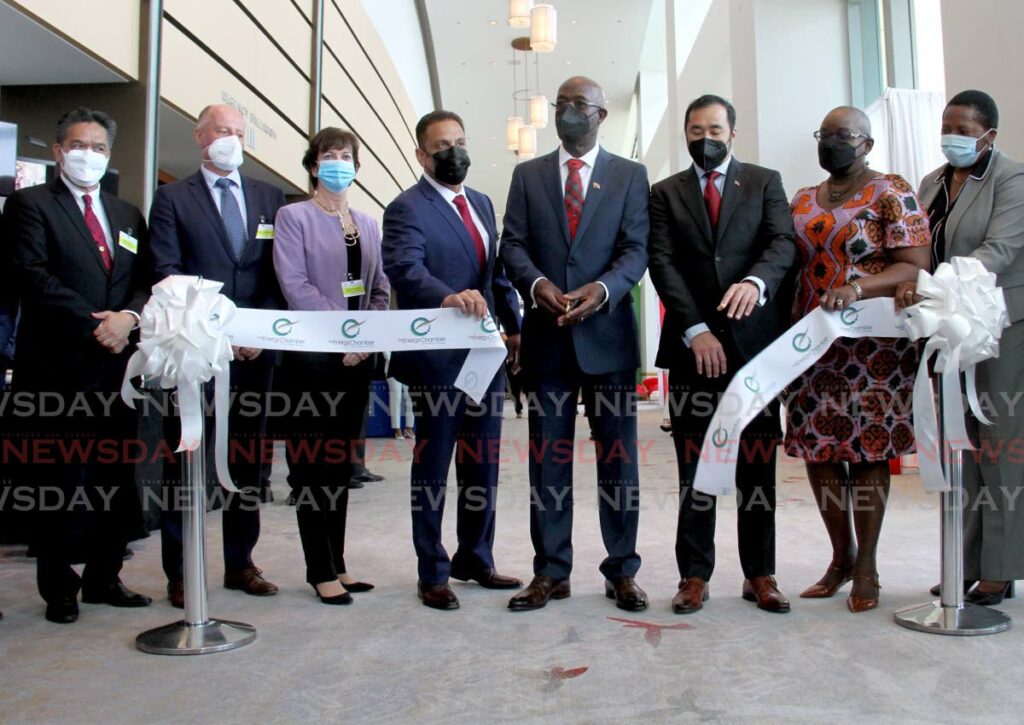 THE Prime Minister said on Tuesday the Government wished to reduce its subsidy of gasoline, but amid a shift to electricity being used to power public transport.

Dr Rowley gave the feature address at the opening of the three-day TT Energy Conference held by the Energy Chamber at the Hyatt Regency Hotel, Port of Spain.

He said TT's commitment to a 30 per cent drop in public transport carbon emissions by 2030 was an opportunity to reduce or eliminate the fuel subsidy, amounting to $23 billion in the past ten years and now at $142 million per month. He recalled recent cuts in subsidies – premium gasoline (52 per cent), super gasoline (38 per cent), kerosene (31 per cent) and diesel 11 per cent).

"We are in a volatile energy scenario with the potential for fuel prices to move in either direction.

"In the current circumstances, we may have little choice but to implement a fuel liberalisation programme to allow domestic fuel prices to move freely with market prices.

"In any such arrangement, we will implement measures to cushion the impact on the travelling public."

Rowley said TT's transportation policy must become more climate-friendly than hydrocarbons, declaring, "The future of mobility will be electric."

Rowley championed a mix of fossil fuels, renewable energy and green hydrogen. (The latter is produced when renewables such as solar energy are used to break down water to release hydrogen, as a combustible or a feedstock, which the PM said TT is well situated to produce.)

Estimating a $2 billion cost for TT to transition, he warned the shift to green energy was "not as simple as flipping a switch."

He then alluded to fossil fuel shortages owing to Russia's invasion of Ukraine.

"The energy crisis has highlighted the current limitations of green energy and the realisation that fossil fuels will continue to play a major part in the energy supply chain, for still some considerable time, as the world innovates and transition to low carbon energy sources.

"The lesson learnt from this realisation is that we need to build our energy future on a foundation of realism.

"In short, we need to strengthen our current energy systems as we transform into one that relies increasingly on renewable energy sources."

"However, for the foreseeable future, hydrocarbons and in particular natural gas, the clean energy, will continue to drive the economy of TT.

"The current outlook due to geopolitical events and energy security issues, suggest that natural gas is increasingly being considered not only as a low carbon alternative but as the fuel of choice. This is evidenced by the growth in natural gas." He said the Gas Exporting Countries Forum predicted a 46 per cent jump in natural gas demand from 2020-2050.

The PM said a Government team is negotiating with Atlantic LNG shareholders to restructure the facility, extend its life and have TT benefit from genuine export prices.

He reckoned TT's gas supply will be tight until the Manatee and Calypso mega projects in 2028, the subsector relying on cross-border access and an aggressive bid-round programme.

The PM declared, "The outlook for oil production is promising,"

Rowley hailed recent finds by Touchstone and BHP Billiton, while urging Heritage to accelerate its leasing, farmouts and joint ventures of its significant idle acreage.

He said the latest oil audit, established 3P (proven, probable, and possible) reserves at 455 million barrels and prospective resources of 3.2 billion barrels, with 90 per cent being deep-water.

"Given the uncertainty of energy transition it is difficult to define the end game, that is, which technology will emerge and what will be the final energy mix.

"Therefore it is in our interest to expeditiously take steps to monetize the country’s abundant oil and gas resources."