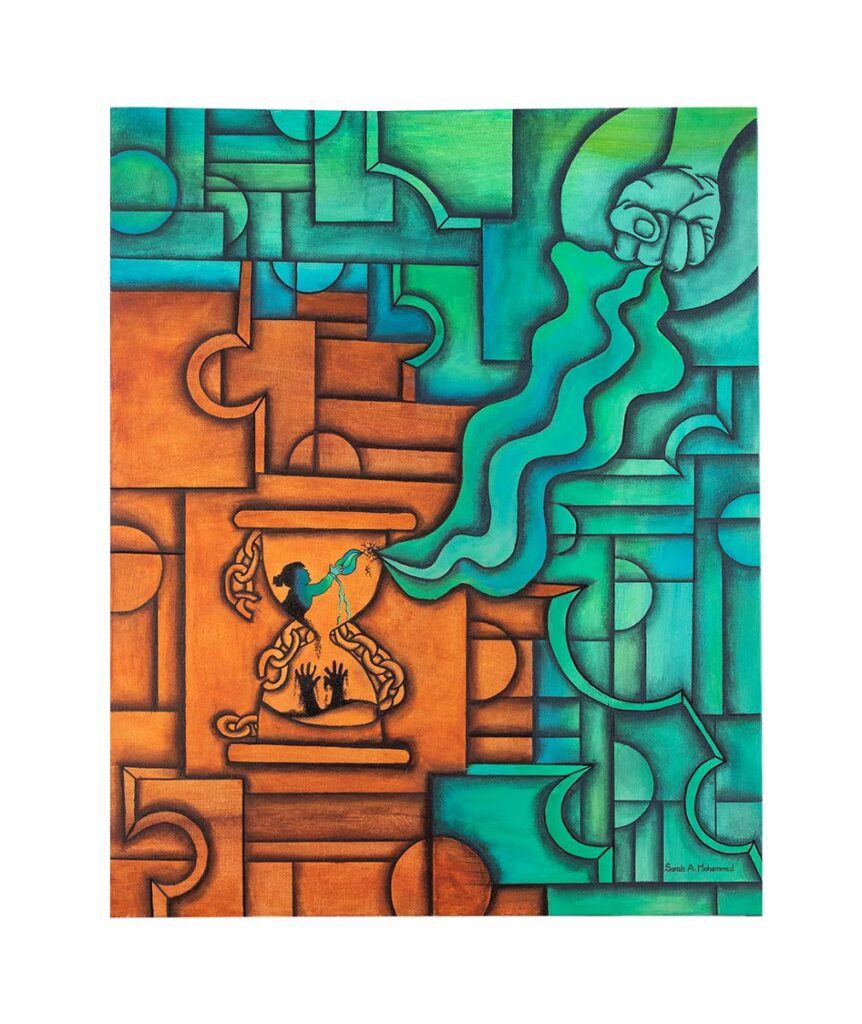 Power of Hope by Sarah Anuradha Mohammed is on display at the Signs exhibition at the Rotunda Gallery until October 14. -

Visual artist Sarah Anuradha Mohammed believes hope is one of the most powerful weapons on earth, and so decided to portray both the light and dark sides of that power in her two pieces of art at the Signs exhibit at the Rotunda Gallery in the Red House, Port of Spain.

“I actually meditated a lot before I did my pieces. It made me gravitate towards one of our social issues as well as one of our environmental issues, namely the victimisation of women and girls, and pollution and marine life.”

Signs, which can be viewed until October 14, has themes of hope, love, joy, motivation and camaraderie.

Mohammed, who will turn 23 the day before the exhibition closes, found the themes fitting right after the country celebrated its 60th independence anniversary and Republic Day, because she believes they are things the nation needs.

“We went through a lot during the pandemic, and now there is a war (in Europe) affecting us. After all of that I think the people need a ray of hope.”

In both paintings she tried to portray both the light and dark side of the power of hope, with the brown and darker colours representing the dark side, while the lighter greens and blues represent the light. 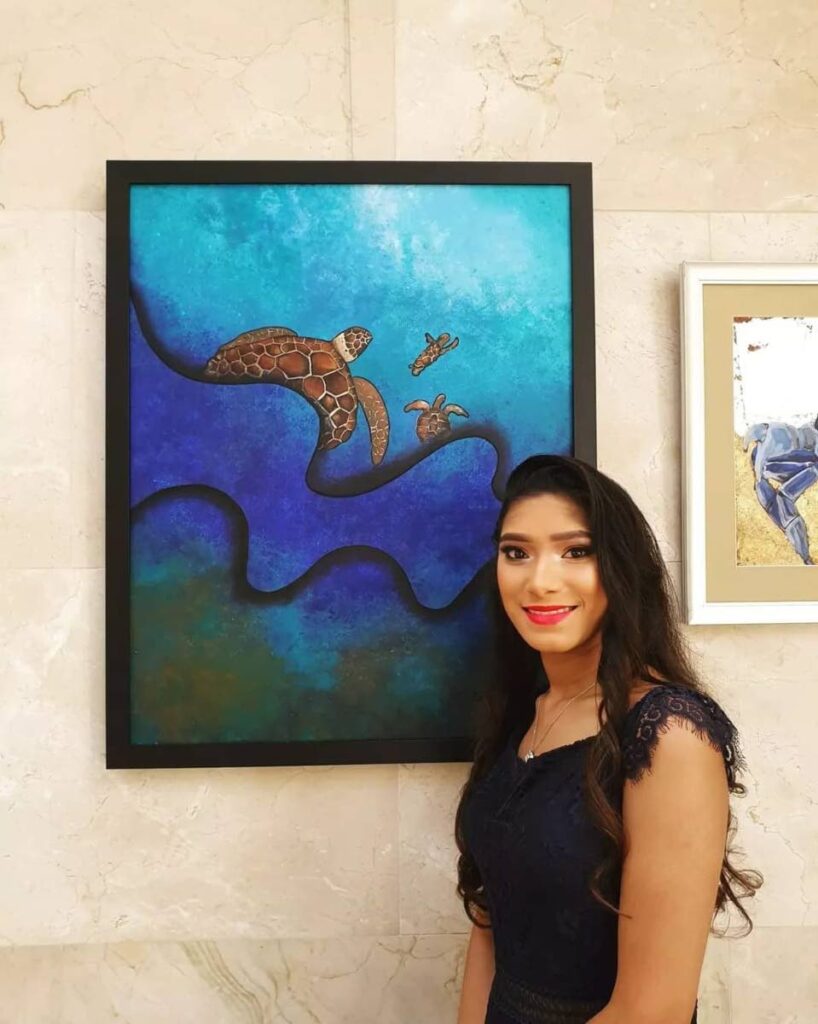 “They show how hope can conquer once it reaches through the different layers of people and society.”

The Power of Hope shows an hourglass which has broken chains attached to it. Outside the glass, a blast of hope from a fist strikes the glass, causing a small crack which allows a trickle of hope to enter. In the top half of the glass is a girl reaching for that small bit of hope. At the bottom there are dark hands reaching out of the sand – the ones hope did not reach, the lost and forgotten.

Mohammed explained the big blast of hope from the fist represented people fighting for women’s rights, standing up for themselves and others, raising their voices against inequality and other issues.

“Notice the blast of hope cracked the glass, but only a little bit of hope seeped in, and what got in is not joined with the rest of the wave. There is no continuation.

"We are at that point, where we are at a standstill. We have walks, marches and protests to express our outrage (when women go missing or are found dead) for about a month, but is it still continuing? There is that massive amount of hope at first, but then it dwindles after a time. We can only hope for change.”

Glimmer of Hope, dedicated to marine life, shows three turtles swimming out of darker water towards the light above. She pointed out that the middle section of the painting is empty except for blue water.

It represented the hope for a clean ocean, but she questioned whether there would still be life there if people waited too long to act.

Mohammed told WMN she recently heard of a fete that took place in Trinidad on a turtle nesting-ground during hatching season. All those people trampling the beach would compact the sand, making it difficult for the hatchlings to dig themselves out, if they were able to do so at all.

She was also concerned about a hotel development at Rocky Point, Tobago. She believed the developers planned to close off a part of the beach, which was a large nesting ground. Relics from the First Peoples were also found in the area. She would love to see the government save the turtles and some of TT’s history.

“Hope is one of the most powerful weapons, but I truly believe that art can also bring a sense of peace. The importance of peace is either hidden or misconstrued. Peace is considered as an essential element to the realisation of all human rights.

“Therefore, I am asking for the Minister of Education to consider the idea of implementing ‘peace education’ in schools and early as primary school, teaching children from small how to

"Having peace means having a more productive society. We need elements like peace and hope to be radiated onto the nation in order for us to aspire together in full unity.”

Mohammed told WMN her artwork focused on “artivism” (a combination of art and activism) and self-expression. Therefore she used her talents to highlight current social, economic and environmental issues.

Her art also has a propensity towards spiritualism and the abstract in an effort to find her own truth and to help others to find theirs.

“I wish for the voiceless to finally be heard. I believe that using the field of art can create a framework where people are more receptive and sensitise. It helps the audience to better understand the severity of the current global dilemmas.”