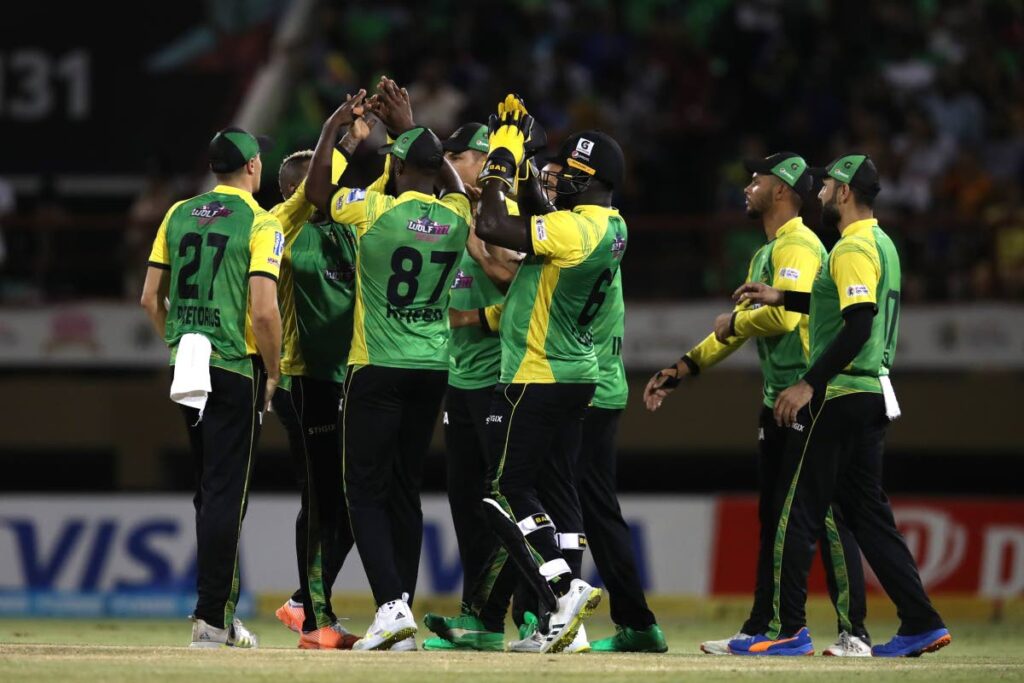 Fabian Allen (second from left) is joined by his Jamaica Tallawahs teammates after claiming a wicket against the Barbados Royals, during the teams' Hero Caribbean Premier League final match at the Providence Stadium, Guyana on Friday. PHOTO COURTESY CARIBBEAN PREMIER LEAGUE. -

Allen's return of three wickets for 24 runs against Barbados Royals in Friday’s final, at the Providence Stadium in Guyana, saw him dismantle their opponents’ top-order and play a key role in destroying, what could have been, game-changing partnerships.

The Jamaican dismissed the first three Royals’ batsmen – Rahkeem Cornwall (36), skipper Kyle Mayers (29) and Azam Khan (51), as the Barbados franchise got to 161/7 after 20 overs.

In response, the Tallawahs were indebted to tournament's Most Valuable Player Brandon King (83 not out) and Shamarh Brooks (47) as they reached 162/2 in 16.1 overs.

This was the Jamaica franchise’s third CPL title since the competition bowled off ten years ago.

Prior to the tournament, which began in late August, Allen made himself available for West Indies selection, after he was previously unavailable for selection for six months owing to his father’s passing.

“It’s a great feeling," said Allen. "I dedicate this one to my father who passed away a few months ago. It’s a good victory and I want to thank the fans and everyone who supported us."

Although he was not selected in the WI's 15-man squad for this month's ICC T20 World Cup in Australia, Allen pointed out, “After six/seven months without cricket it’s tough to come back and blast into it. It’s a good finish for me and I’m grateful about that.

"I feel good personally it’s just that simple mistakes let me down but coming next year, I’ll be working on that,” he added.

When asked what’s next for Allen in the near future, he replied, “The world.”

The Tallawahs’ win was also Shivnarine Chanderpaul’s first major title as coach of a men's team.

Earlier this year however, ‘Chanders’ was appointed coach of the United States women’s cricket team, which travelled to Trinidad in July, to execute a historic defeat of the hosts at the Cricket West Indies U19 Rising Stars Championship. US won the tourney with Chanderpaul at the wheel.

On his first CPL victory as Tallawahs coach, the former West Indies captain said, “Well this is the first big thing for me as coach, and this is the highest (title as coach) for me. I played cricket before but have never done something like this, winning CPLT20, as coach. This is fantastic and great for me.”

The legendary WI batsman credited his team’s wealth of experience and youth as one of their assets en route to lifting this year’s trophy.

“(Mohammed Amir) was a really good addition to us and he played really well, and bowled really well in these conditions. And these are guys who have a lot of experience playing international cricket.

“And (Chris) Green played here for many years so he has a lot of experience out there. We have a good balanced team with experience and some youths and that is probably what helped us,” he added. 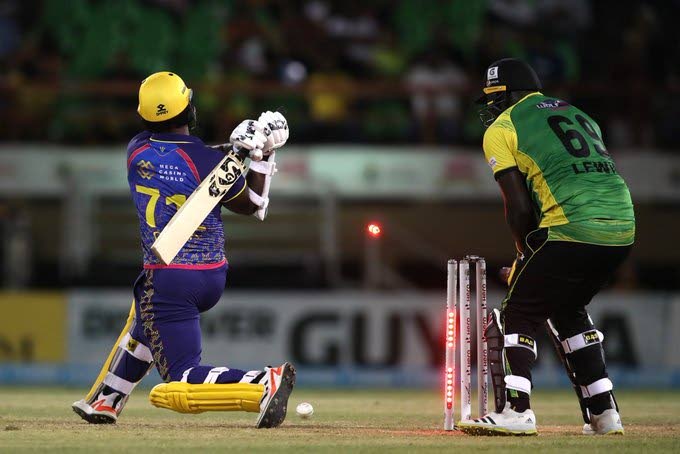 Tallawahs skipper Rovman Powell said the team’s dip in form, mid-season, and the “disrespect” directed to them because of this, served as motivation for them to go harder.

“Adjectives are inadequate in describing how we feel," said Powell. "In the middle of the competition we endure some disrespect and that is something that fueled the guys.

“Just before the playoffs started, some little backroom stuff started happening in the camp and I called the guys together and told them that all we need to do is rally and have one more, good week of cricket together and the guys did fantastic.”

The Windies T20 vice-captain credited the Tallawahs’ comprehensive approach which allowed different players to shine during different parts of the competition.

Powell added, “When the ship got rocky, (the players) stuck with me. When things go tight, the senior and overseas guys held their own and played a big role.

“What I’ve learnt is that you have to lead from the front as a captain with personal performances. Once you do that it becomes easier to push the team in a particular direction. I also learnt that you cannot do it all by yourself, you need good persons around.”

In their final playoff match against Guyana Amazon Warriors at the Providence Stadium on Wednesday, the Tallawahs ensured the host franchise would have to wait another year to get their hands on the elusive CPLT20 title, courtesy of a 37-run triumph.

The Tallawahs piled on a mammoth 226/4 and restricted the Amazon Warriors to 189/8 after 20 overs.

Powell thought the result would have made them targets of the Guyana crowd in the title match on Friday. However, this was not to be, particularly with Guyanese star Chanderpaul leading the Tallawahs' technical staff.

“I must make special mention of Guyana because the pitches were pretty good. A lot of the fans, after we beat Guyana, they could have turned against us, but they didn’t. They came in their numbers today and supported us. We feel like it was a home game,” Powell closed.