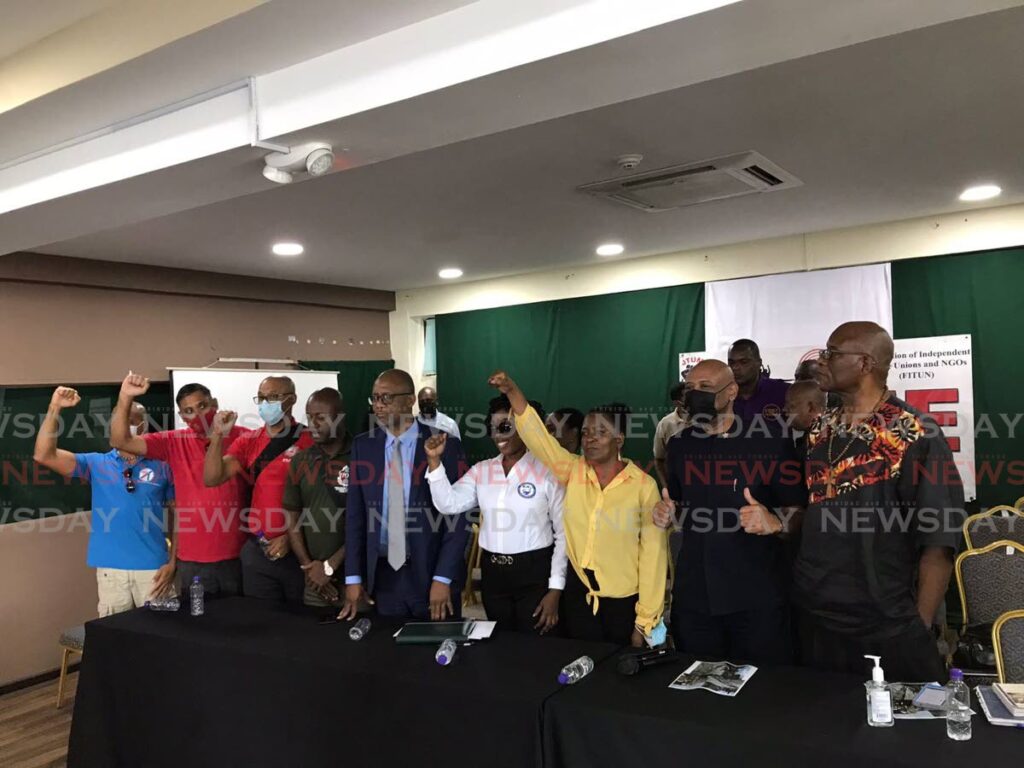 Trade union leaders at a media conference at PSA Headquarters, Port of Spain, on Tuesday. Photo by Nicholas Bayley

Members of all unions in TT will gather in Port of Spain on Friday to protest against the treatment being meted out to WASA workers by the government. The unions said they all categorically reject the four per cent wage offers made to them by the Chief Personnel Officer (CPO) Dr Darryl Dindial.

The joint trade union federations – NATUC, JTUM, and FITUN – have come together to form the Unite to Fight movement.

At a media briefing held at the Public Service Association’s offices on Tuesday, PSA president Leroy Baptiste reminded workers they should not let government divide them against other workers.

“They keep saying that taxpayers will have to foot the bill to pay workers’ backpay. But let me remind you, workers pay taxes, we are taxpayers. We have the right to share in the spoils that we have worked for.”

He said the offer of four per cent was effectively a cut in workers’ salaries since cost of living, food prices, and gas prices have gone up, so that workers will have to find the difference out of their pockets.

Baptiste called on the public to reject the government’s policy of retrenchment of workers in TT. He said government is attacking good-paying jobs in an effort to continue the exploitation of workers by placing them permanently on contract.

“We are here to ensure that the attack on organised labour comes to an end. When they rename a company, there’s automatically no union representation. We want to make sure people are permanent in their jobs with decent pay.”

Joint Trade Union Movement head Ancel Roget said the CPO’s offer of four per cent was disrespectful and he was just a mouthpiece of the government. He said the Public Utilities Minister misinformed the population about the situation at WASA.

“The lie that there were 400 managers at WASA must be dispelled. Where you ever hear any company had 400 managers? You the workers are taxpayers and you are the employers of the government. If we hire them we must be able to fire them. If they are taking money from us, they’re no better than the bandits. If they’re riding for us, we must be riding for them.”

He reminded that there were a number of state and statutory institutions for which negotiations had not begun, and said government was hoping that the unions would accept four per cent now and forget about what had occurred by 2025.

NATUC general secretary Michael Annisette said the offered increase was an insult to the intelligence of workers. He noted that an increase of four per cent meant that someone currently earning $7,000 per month would be earning $7,282 over the 72-month period offered.

“If workers don't go out, the economy fails. If you don't care about me, I don't care about you. This issue is with the government as the employer, where under ILO convention and industrial relations act, they must come to the table and treat with the unions.”

He noted that there were negotiations with NIB and port workers where negotiations had been completed and signed off on, and government is refusing to give instructions for the backpay to be paid.

Roget said the march on Friday would be the first of many strategies to be implemented by the union, all under the ambit of the law.

The march starts at 9 am, with members gathering at the Band Stand, marching through the streets of Port of Spain and ending at Central Bank.