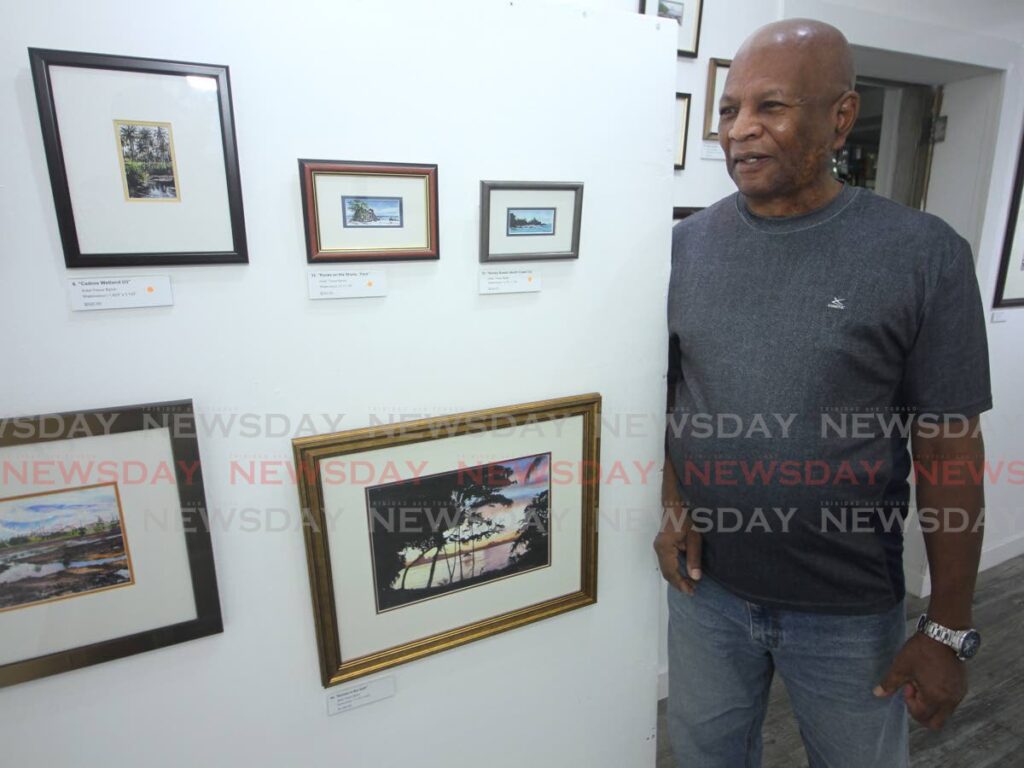 Trevor Byron shares the history of his paintings during his exhibition at Arnim's Galleria, La Romaine - ANGELO MARCELLE

Trevor Byron, 72, has dedicated his life to art, and his art to the beauty of nature. He is once again displaying that beauty at Arnim’s Art Galleria South with his newest solo exhibition, Bequeathed Pt III.

“Almighty God has bequeathed man the earth with all its natural wonders – the trees, the birds, the forests, the streams, the water, marine life – and we’re supposed to take care of it but man is destroying it.

“I paint the beauty of nature hoping people would see it, and that it is something beautiful and necessary to be preserved. I’m trying to build that awareness in people through my art.”

Byron has exhibited his land, sea and river-scapes in numerous group and solo shows since 1969, and added marine life to his repertoire when he became a qualified scuba diver in the 1980s.

He takes photos or draw sketches and recreates them using acrylic and oil paints on canvas but he mostly works in watercolour paint on watercolour paper. 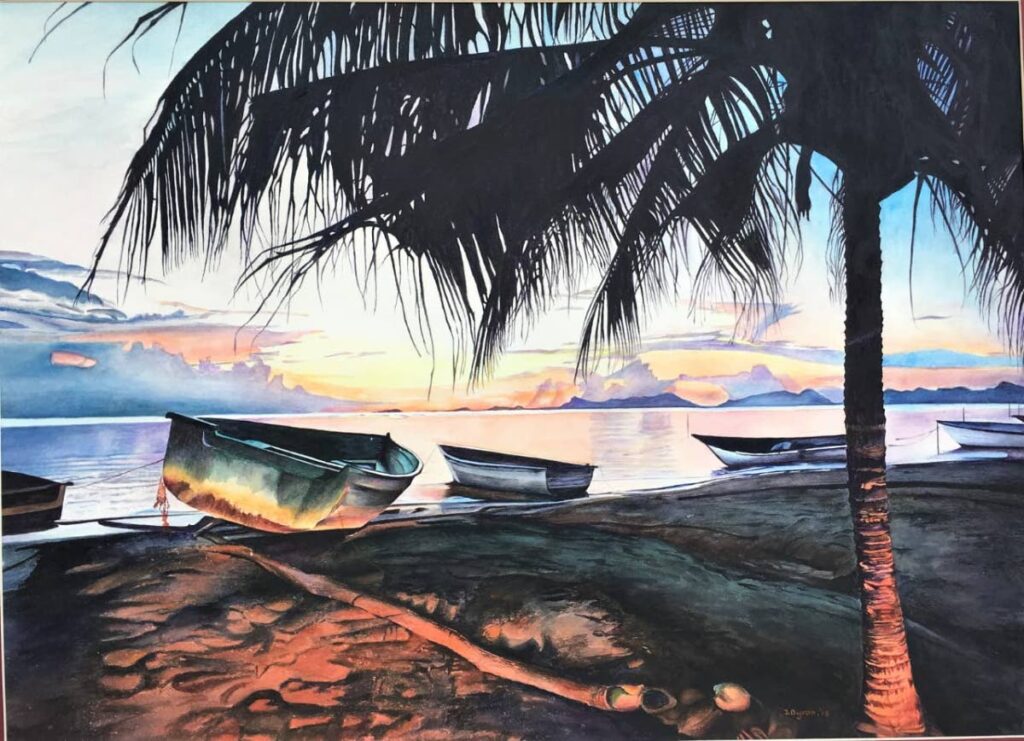 He said he became the first artist in TT to paint underwater scenes and had a marine life exhibition showcasing over 150 species of fish and coral in 1993. He is also the first TT artist to be a finalist in the 2022 International Watercolour Masters competition in England, where he won an award for being a Highly Commended finalist.

Bequeathed Pt III has about 80 pieces, many of which are miniatures, covering works from 2015 to 2022. He explained that larger pieces, 22x30, usually takes a long time to paint.

For example, creating the affect of rain on the leaves and on the water in the piece, River Scene: The Magnificent Grande Riviere in the Drizzle, took him almost two years to paint.

“Working on a piece every day for several hours, I got tired of it but I still wanted to paint, so I’d do a miniature which would take about an hour to an hour and a half. What gives you an ecstatic feeling is finishing a painting so I’d get that sense of accomplishment in between.”

Byron told Sunday Newsday his parents told him he had an obsession with painting and drawing since he was four years old, and they kept that obsession alive by buying him art supplies and books. He never stopped painting and won many children’s art competitions in his youth.

As he got older, his parents would buy him books on great artists of the world and he studied their work. They motivated him to keep painting and to be a great artist himself.

Born and raised in Princes Town, he studied art at O- and A-Levels at St Stephen’s College and St John’s College respectively. He then attended Teachers’ Training College in Mausica where he did art as his elective subject. In 1969, at age 19, he became an art teacher and started showing his work at group exhibitions before having his first solo show in 1980 at City Hall in San Fernando. 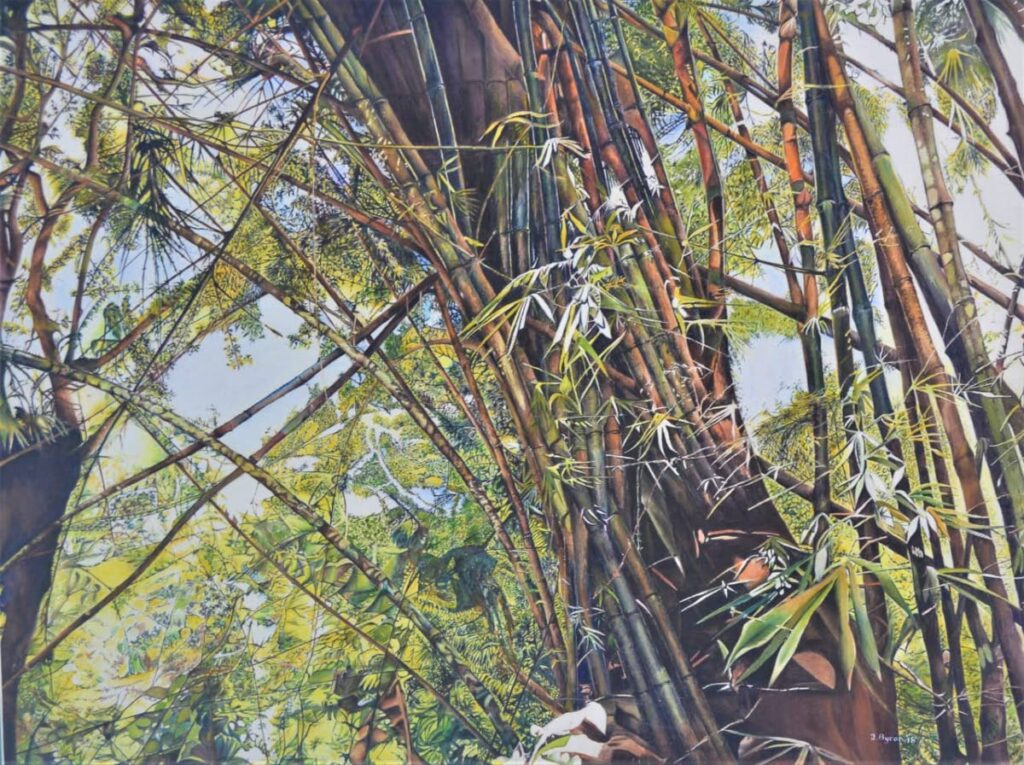 Bamboo... At the Top was one of the pieces that made artist Trevor Byron a finalist in the 2022 International Watercolour Masters competition in England. -

“I didn’t go to a university to do art so you could say I’m more-or-less self-taught. It is a gift from the Almighty and, as I kept painting, I kept getting better and better with His guidance. Which is probably why I’ve devoted my life’s work to heralding His gift to mankind.”

He taught art at several secondary schools in south Trinidad and retired early at age 50. He said in his 20s and 30s he had the energy to teach and paint but by the time he reached his 40s he began to slow down in his personal work.

He still painted when demonstrating techniques to his students and when teaching private classes. And he felt great joy seeing his students working and putting their hearts and souls into their paintings but he had the urge to paint what he wanted, when he wanted and exhibit it.

After retiring, he worked as a full-time artist as well as a curator and gallery owner until the gallery closed in 2009.

In April 2006, he and his wife, Natasha Parris Byron, also pioneered a multicultural arts collaboration between Canada and TT under the patronage of the Canadian High Commission and in collaboration with June Springer, founder of Caricom Arts and Craft Inc in Winnipeg Canada.

His gallery, Voix-An Art Gallery, hosted four Canadian artists and the works if three others in a joint international exhibition and workshop with seven local artists.

When asked what sets his work apart from other watercolourists, Byron said it is the details that make his work look natural.

“I go deeper into my work, go further to bring out the details. I use all the watercolour techniques, wash over wash over wash to get tones, then I go in with a fine brush and add details to those tones.” 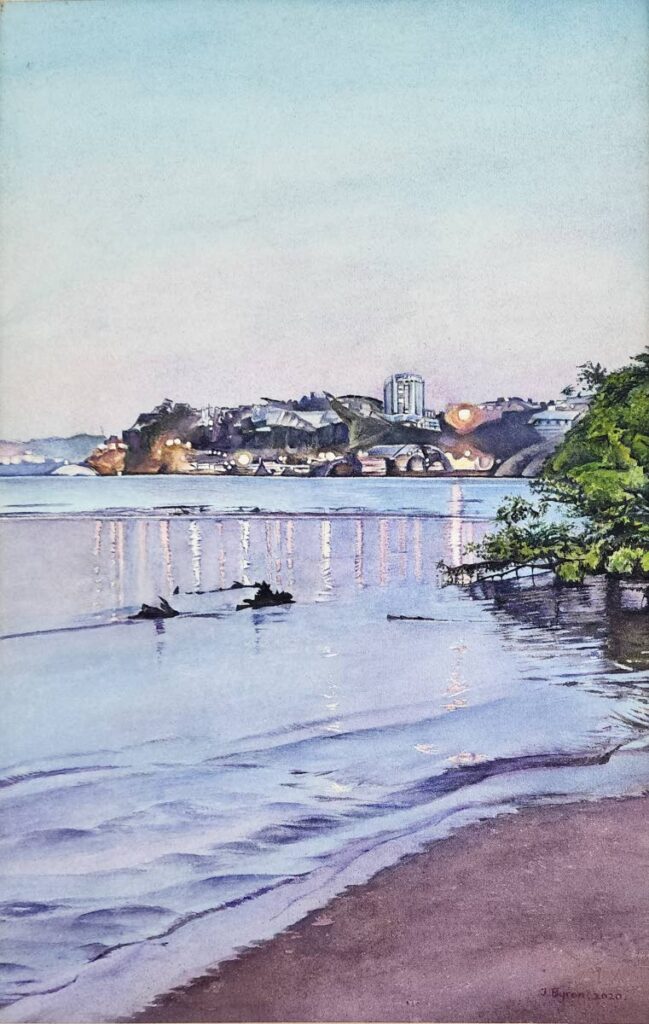 View of San Fernando from Gulf View by Trevor Byron. -

He also likes to play with light, highlighting different times of the day, which determines the brightness and shades of each piece.

“My work must mirror nature – light and dark, atmosphere, and mood. So when the viewer sees them, it would energise them and make them want to visit the area.”

He said he would like to do another marine life exhibition one day and revisit the sites of some of his older works to see and paint how changed they are, to show people the degradation caused by man.