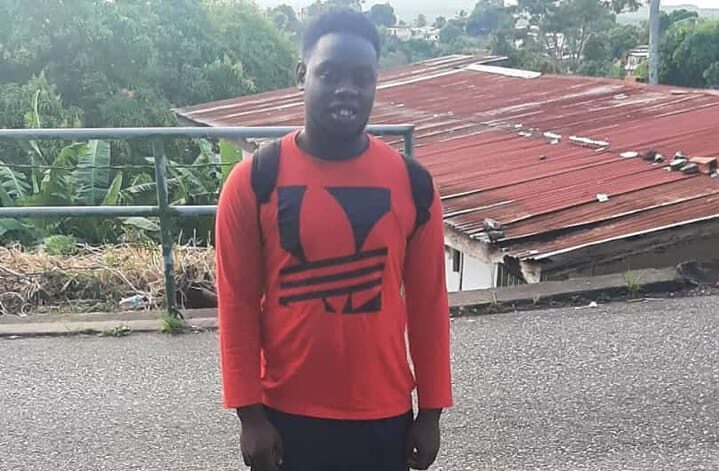 When 23-year-old Cody Pierre told relatives he was leaving his home at Sapodilla Trace, Laventille, to buy a cigarette nearby, he did not expect those would be his last words to them.

But he and two other men were gunned down on Tuesday morning.

Police said Pierre, Jevon George, 23 and Alex Morton were standing on Sapodilla Trace at around 9 am when two men with rifles shot them several times. 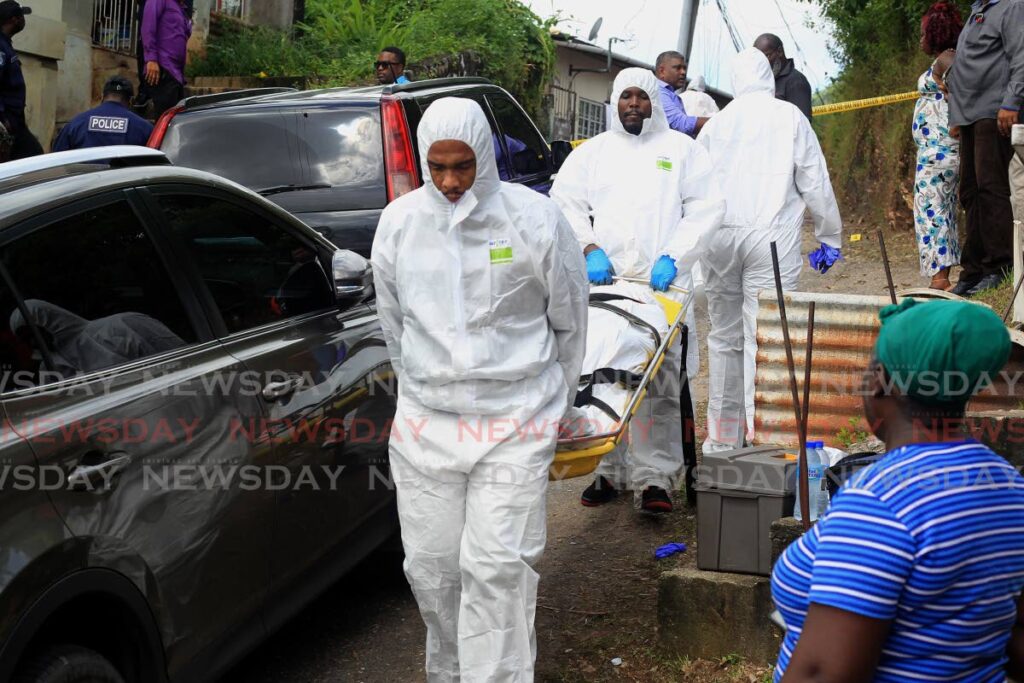 Undertakers remove the body of Jevon George, one of three victims shot dead in Laventille on Tuesday morning, as homicide investigators gather evidence and speak with relatives at the crime scene on Sapodilla Trace. - Photo by Roger Jacob

The gunmen got into a silver Toyota Axio and drove off.

Pierre and George died at the scene.

Speaking with Newsday, Pierre's mother, Debra Clunis-Pierre, said her son worked as a cleaner at Holy Name Convent, Port of Spain. She could not think of any reason why anyone would want to harm him. 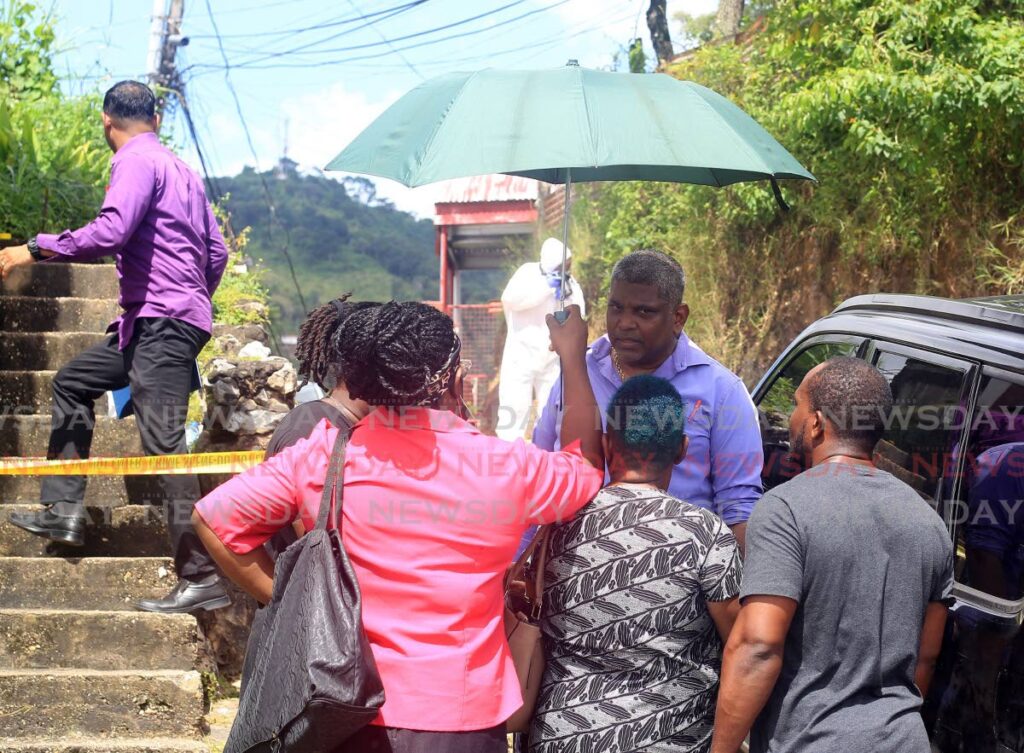 Police homicide investigators speak with relatives of the victims of a triple murder at Sapodilla Trace, Laventille on Tuesday. - Photo by Roger Jacob

She also lamented the spate of murders, saying innocent people were just as likely to be killed as criminals, given the carelessness of gunmen.

"All he liked to do was smoke his weed, and that was it.

"But why innocent people have to be going through this? I find that so wrong and it's a set of nonsense, useless killing for no reason.

Clunis-Pierre said her son recently moved in with his sisters, had spoken about spending Christmas with his father and was looking forward to the holidays.

Newsday also spoke to Jevon George's sister, who lamented the murders. She said she was told about her brother's murder while at work and left immediately. 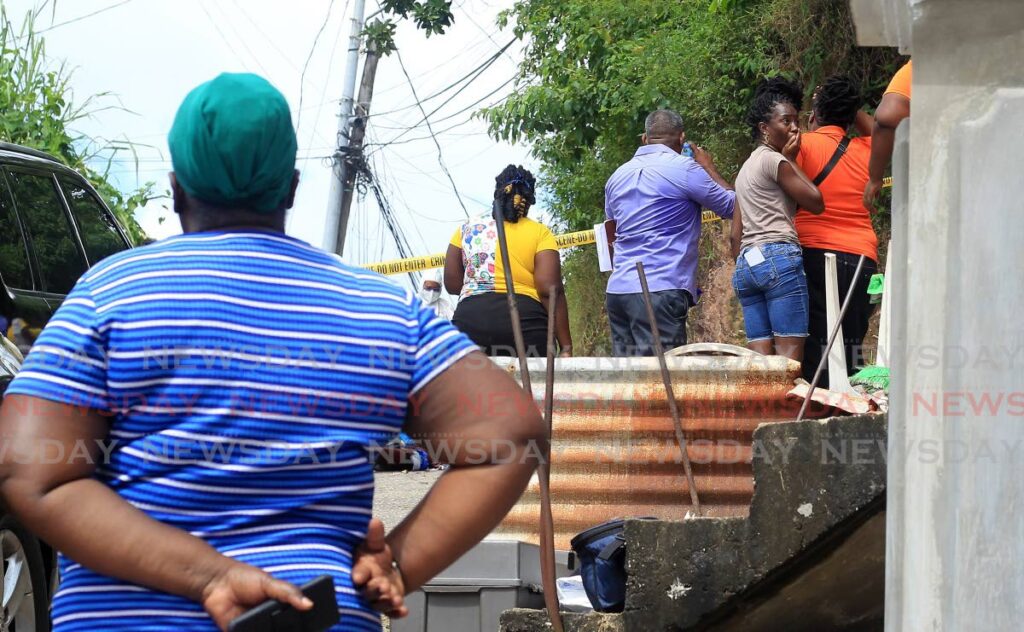 Residents look on at a crime scene at which three men were killed on Sapodilla Trace, Laventille on Tuesday. - Photo by Roger Jacob

"I got a phone call telling me that they just killed my little brother on top of the hill.

"As soon as I got that I picked up my bag and called my manager and told him that I had to leave now, they just killed him.

"It needs to stop, they're overdoing it now, because it's innocent people getting killed for no reason."

She said her brother was unemployed but had recently sat an exam to join the regiment and looked forward to getting a job.

She said George was always smiling and was not known to be involved in any illegal activities.

"The only trouble he used to give is, he would ask you for a $5 if he happened to see you on the road."

Another of George's relatives said she heard "a set of shots" from her home on Tuesday morning.

"But I just thought it was those fellas testing their firepower the morning.

"Then when I checked I saw a police vehicle, so I thought now there would be a shootout with the police."

When Newsday visited Sapodilla Trace, the bodies of Pierre and George were still there, awaiting removal by undertakers. 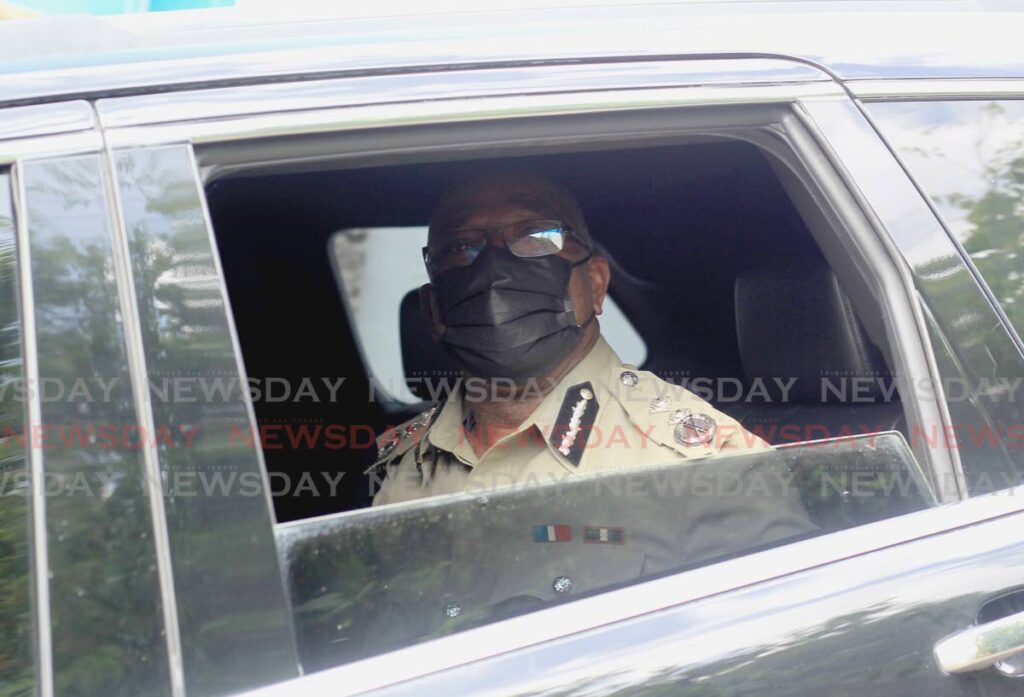 Police Commissioner McDonald Jacobs speaks to residents and media at the scene of a triple murder on Sapodilla Trace, Laventille, on Tuesday. - Photo by Roger Jacob

Contacted for comment on Tuesday afternoon, Jacob said the murders of the three men were cause for concern and such tragedies strengthened the resolve of the police to remove guns from the street.

He said a mobile police post has been introduced in Trou Macaque, Laventille, about 500 metres from the scene of the triple murder, but criminals were focusing their activities as far away from the police as possible.

"Again, it's very heartwrenching to see three young men from one community whose lives were snuffed out because of these miscreants who are running around with these high-powered weapons.

"Since we have tightened up our operations on the main streets in the community, we are seeing the offenders going deeper within the communities and preying on what they deem to be their enemies. This particular incident occurred deep within Snake Valley, Laventille."

Jacob said this latest incident was the fourth triple murder for 2022. He added that there have been 37 double murders and two quadruple murders for the year so far.

While the murders were troubling, he said, the police have made progress in their campaign to remove guns from the street: for the year thus far, 625 guns have been seized, 115 of which were high-powered rifles and machine guns.

Noting the value of community-based programmes that joined the efforts of non-governmental organisations (NGOs) and faith-based bodies in steering youths away from crime, Jacob reaffirmed that hardened criminals needed to be removed from the streets altogether.

"There are so many offenders, or persons who have crossed the threshold and have joined gangs, and are now deeply involved in criminal activities. The only way we can deal with them is not necessarily in the way of rehabilitation through restoration, but arresting and charging them for the violation of the law and seizing their firearms.

"Yes, we have to continue the work from the social side, for example, but that is to prevent young people from being recruited. People who have already crossed that threshold – it is necessary we take them off the streets by all lawful means necessary."

He said once convicted and serving a sentence, prisoners can benefit from rehabilitation programmes and was optimistic that the Vision on Mission programme the Love Triangle could go a long way towards prisoner reform.

Jacob also called on the public to support the work of homicide officers, saying although the murder toll was rising, the police have also made strides in detecting and solving crimes.

"For this year so far we have already charged 115 people for murder, which is also a record, where the highest was sometime four years ago, where we had 106 people being charged in an entire year. Over 20 people have been charged over the last two weeks for murders.

"So we look forward to significant support from the communities and the Forensic Science Centre."

The three murders in Laventille brought the murder toll to 555 as of Tuesday, compared to 415 for the same period last year.

There have been 44 murders for the month of November.