Tesla Inc.’s relentless surge faltered Monday, with shares erasing a double-digit gain and dipping into negative territory, despite enthusiasm ahead of several events that include the possible unveiling of new battery technology, the entry into a lucrative new market and the stock’s potential addition to the prestigious S&P 500 Index.

Tesla shares, which had gained as much as 16% Monday before losing steam, have seen an incredible rally this year that has left Wall Street analysts struggling to make sense of the sky-high valuation — which soared past that of Toyota Motor Corp. earlier this month. Tesla is up about four-fold just this year, despite a steep pandemic-related sell-off in February and March.

Although Tesla had kicked off this year with a strong run, its ascent has been turbo-charged after reporting better-than-expected delivery numbers earlier this month, leading many to say the company may be poised to report a profit for the second quarter. Profitability is good news in itself, but in the case of Tesla, this would also mark the fourth consecutive quarter of profit, a milestone it needs to achieve to be considered for inclusion in the S&P 500.

At the current price, Tesla’s stock reflects an expectation of 2030 volume of 5 million units, which is more than ten times what the company appears on track to achieve this year, Morgan Stanley analyst Adam Jonas said. “We’re not saying these are assumptions that are not possible, but they are a very big leap ahead from what the company has proven to date,” the analyst wrote in a report. Jonas has a sell-equivalent rating on Tesla, with a price target of $740. 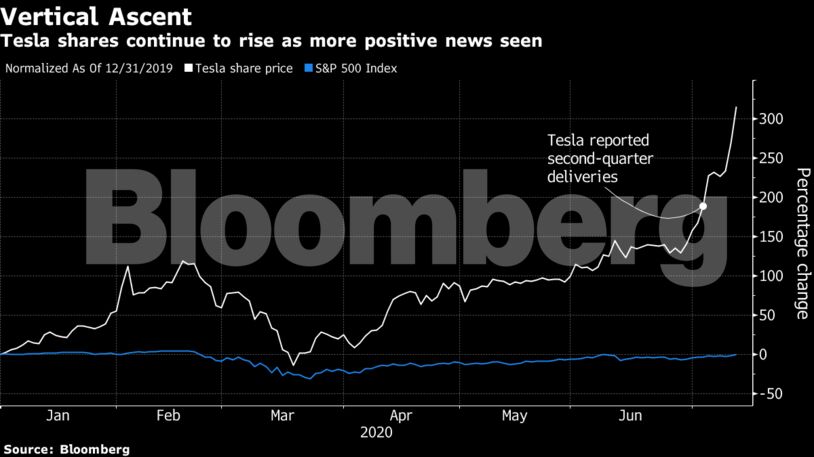 Tesla late Friday said its much-anticipated “Battery Day” event will be held on Sept. 22, at its factory in Fremont, California. According to Wedbush analyst Daniel Ives, the company could announce a number of “game-changing” battery developments at the event.

“The technology innovations around Fremont remain the key ingredients in Tesla’s success on the battery front and we believe the company is getting closer to announcing the million-mile battery,” Ives wrote to clients. Ives expects the new battery to potentially last for decades, as well as withstand all types of weather and terrain.

Roth Capital analyst Craig Irwin, one of the more skeptical analysts on the Street, upgraded his rating on Tesla to the equivalent of a hold from sell, saying the company is well down the path of preparing to enter the Indian market, where the analyst sees China-like potential. “We expect tangible evidence by the end of 2020, with sales in India starting as soon as 2021,” Irwin said.

Thomas Tuchel: If both legs were intact, you could have seen my 40-meter sprint
PSG saved Tuchel's pet: Choupo-moting got everyone for free, managed not to score from a centimetre, and now pulled Paris to the semi-finals of the Champions League
Gian Piero Gasperini: The worst part is that we were so close. I can only thank the guys
Neymar was the player of the match Atalanta-PSG. He gave an assist
ПС PSG suffered through the entire quarter-final and turned it over in 149 seconds. Lifted the Italian curse and went so far in the Champions League for the first time in 25 years
ПС PSG's pain was transformed into happiness: in three minutes, the suffering stars turned into celebrating kings
The club from Italy won't win the Champions League for the 10th year in a row. This is an anti-record
Source https://www.dailymaverick.co.za/article/2020-07-13-tesla-falters-after-optimism-over-battery-day-india-sp/

Maverick Citizen Op-Ed: Our Rightful Place in the Sun: Marcus Garvey and the 1920 Declaration of Rights of the Negro Peoples of the World

OPINIONISTA: From Pareto to Piketty, Confucius to the Qur’an: How do we deal with inequality?

OPINIONISTA: Covid-19 philosophy: How the joy of living will overwhelm the fear of dying

OPINIONISTA: The salvation of communication: Storytelling our way through Covid-19

OPINIONISTA: Obsession with race impedes the progress and emancipation of black people in Africa

NATURAL CLEANERS: Taking a harder look at vultures and their complex role

THE CONVERSATION: Greed: Why political killings have again taken hold in KwaZulu-Natal

ANALYSIS: Terminating SA cricket boss Thabang Moroe’s contract is not the end of a torrid saga

From foggy glasses to 'maskne': 4 mask hacks you need ASAP

OP-ED: It’s time we academics climbed out of our Western ivory towers and embraced new ways of thinking

News24.com | Covid-19: There are hopeful signs the virus has peaked, says SAMRC

BUSINESS MAVERICK: Amazing: The JSE is now up for the year 2020

READ IN FULL: Lesetja Kganyago on Bank policy in the shadow of Covid

Maverick Citizen Op-Ed: Adding insult to injury: When you’re a womxn and a caregiver, you’re not a citizen

Police brutality under lockdown: Members of public have ‘no faith’ in cops

Second bail bid for man accused of wooing women, making off with money and goods

News24.com | It is in the interest of the public that the Public Protector is held to account - judge

News24.com | Police brutality under lockdown: Public has 'no faith' in cops

Namibia: Statement by Dr Kalumbi Shangula on Migration to Stage 3

Newsdeck: Is it a bird? Is it a plane? No, it’s Canadian Prime Minister Justin Trudeau

Benjamin Dixon Takes Off On Joe Biden: Why Does Biden Keep Insulting Black America If He Needs Our Votes?

Transnet to retreat from West Africa to focus on Sadc

Wits strike late to hold Chiefs to a draw

Mashaba’s new party: A coalition of the wounded, or a viable alternative?

News24.com | Futuregrowth: SA is in a 'debt trap twilight zone'

News24.com | South Africa's ultra-wealthy make their money much later in life - here's why

Thandi Modise 'being unfair and siding with DA' over Mkhwebane, court hears