JPMorgan Chase & Co. is moving about 200 billion euros ($230 billion) of total assets to its Frankfurt-based subsidiary by the end of the year as a result of Britain’s exit from the EU. Other banks have also been beefing up operations in the bloc.

The Square Mile’s current dominance is such that plenty more banks would have to shift as many assets as JPMorgan to start undermining it. 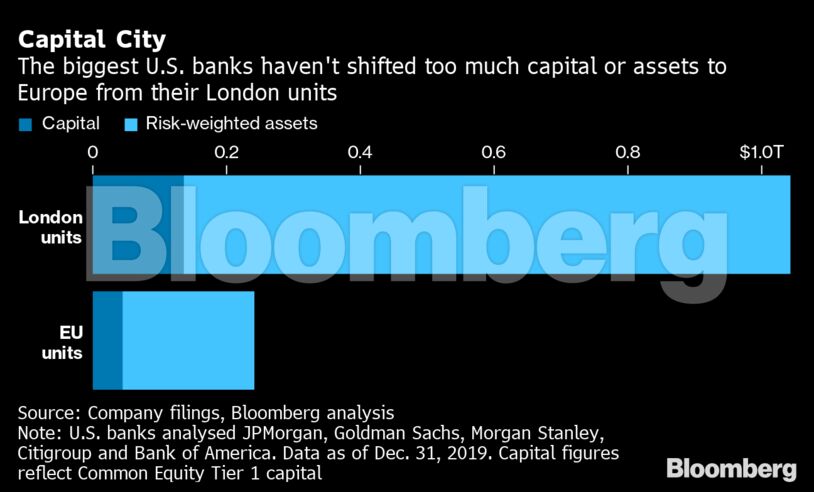 Wall Street’s five big firms retained three times the equity and more than four times the amount of risk-weighted assets in their U.K. subsidiaries compared to their EU ones at the end of last year, according to a Bloomberg News analysis of regulatory filings and annual reports.

JPMorgan, Citigroup Inc., Morgan Stanley, Goldman Sachs Group Inc. and Bank of America Corp. had a combined $900 billion of risk-weighted assets in the U.K. versus about $200 billion in the EU. The banks underpinned their U.K. units with $136 billion of core capital while the figure for the EU was $45 billion.

London “continues to be a very important” financial center, JPMorgan’s EMEA investment banking co-head Dorothee Blessing said at a Bloomberg webinar Thursday. She also said the bank will keep moving staff and assets from London as it grows its business in continental Europe.

Banks measure both their total assets as well as their balance sheet weighted according to its riskiness. Bloomberg has used the latter in this story to ensure comparability between the U.K. and EU units. All five lenders declined to comment. 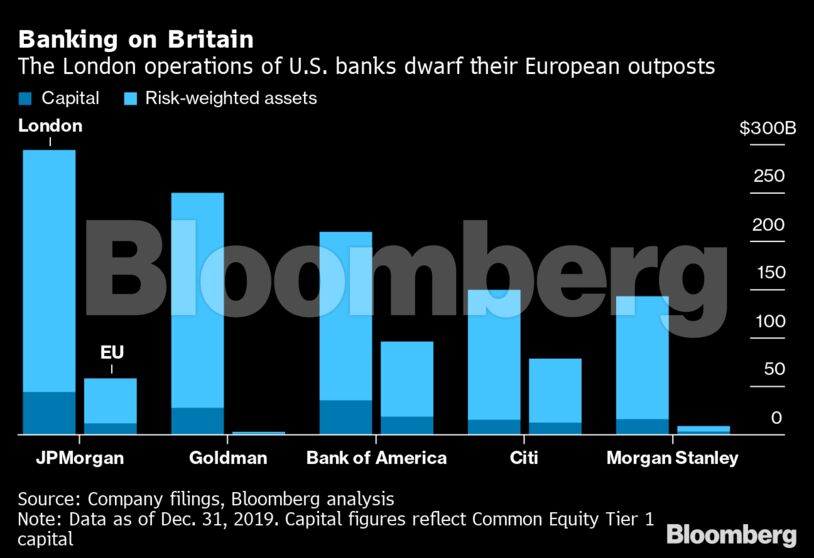 As JPMorgan’s transfer shows, these distributions may have already changed since the end of 2019 and more capital is likely to shift as the nature of Britain’s exit becomes clearer in the coming months.

Business with EU clients represents anywhere from a tenth to a quarter of London revenue, according to industry and Bank of England estimates. The European Central Bank says that while some lenders have made good progress in setting up in the eurozone, others need to move more staff and assets. The regulator wants the units to be robust enough to manage risk locally.

As a docking station for global investors, London’s role extends beyond business with EU clients. The city’s critical mass means it is an efficient place to do business for banks and their customers and even if the U.K. fails to reach a trade deal with the EU, both sides have a system in place to preserve some financial ties.

While international banks continued to move some of their balance sheet to Dublin, Frankfurt or Paris this year, some bankers say privately that they won’t need to relocate as much capital as originally anticipated. That’s partly because U.K. regulators are also encouraging them to maintain adequate reserves for their giant operations in London, the bankers say. There’s also the question of whether the revenue they stand to generate in the EU is worth the cost for smaller banks.

The foot-dragging also reflects a reluctance to spend or subject staff and clients to upheaval as long as there’s uncertainty over how the U.K.’s divorce will play out. The pandemic and subsequent restrictions on travel have also slowed decision-making and transfers.

Equally, banks may accelerate the shift as the U.K.’s transition phase runs out and lenders are already planning for a messy divorce at the end of the year.

“We keep an eye on all possible eventualities and that of course includes a no-deal scenario,” JPMorgan’s Blessing said at a conference in Frankfurt this month. “We are fully prepared to continue conducting the business we did for clients before Brexit. But there’s a lot left to do in the next months.”

Hans-Dieter flick: I Hope Alaba will sign a contract with Bayern. Our club is one of the best in the world
Diego Maradona: Messi gave Barca everything, brought them to the top. He was not treated the way he deserved
Federico Chiesa: I hope to leave my mark in Juve. We will achieve great results
The Coach Of Benfica: I don't want us to look like the current Barcelona, it has nothing
Guardiola on returning to Barca: I'm happy at Manchester City. I hope to stay here
Fabinho will not play with West ham due to injury
Ronald Koeman: Maradona was the best in his time. Now the best Messi
Source https://www.dailymaverick.co.za/article/2020-09-24-wall-streets-penchant-for-london-remains-even-as-brexit-nears/

News24.com | A weekend in custody for Bushiri as bail application in fraud case held over to Monday

DA confident in voting system, expects elective congress to go according to plan

Bushiris, co-accused set for another weekend in jail as bail hearing postponed