AstraZeneca and Pfizer’s vaccines protected the elderly against Covid-19 after a single dose in a new study that validates giving both shots to older people and spacing out injections.

An experimental vaccine developed by India’s Bharat Biotech International showed 81% efficacy in an interim clinical trial. UK Chancellor of the Exchequer Rishi Sunak extended emergency tax cuts to help the British economy recover, but warned he would ask profitable businesses to shoulder some of the bill for the country’s pandemic support.

President Joe Biden said that the US may have enough vaccine for every adult American by the end of May. He said he hopes the nation can return to normal a year from now.

New York state said that starting on 22 March the outdoor limit on residential gatherings will increase to 25 from 10. Limits for social events will rise from 50 to 100 people indoors and to 200 outdoors. Venues that hold fewer than 10,000 people can open at 33% capacity from April 2, with up to 100 people indoors and 200 people outdoors. Social distancing and face coverings are still required for attendance.

Governor Andrew Cuomo also said domestic travellers would no longer be required to quarantine or test-out within 90 days of full vaccination.

Montenegro turns to army on masks

Montenegro, with one of the highest infection rates in Europe, is relying on police and the army to enforce virus restrictions, including mandatory face masks and social distancing, according to a government statement on Wednesday.

The Adriatic state of 650,000 is also curbing intercity travel and suspending non-essential services as a last-ditch attempt to avoid a complete lockdown, Finance Minister Milojko Spajic said in a briefing in the capital city of Podgorica.

“The pandemic is also a financial problem, but we cannot choose between health and the economy,” Spajic said.

Rochelle Walensky, the director of the Centers for Disease Control and Prevention, said that though cases have halted their decline from January highs, it’s not yet time to lift restrictions.

Texas Governor Greg Abbott said on Tuesday that the state would lift its mask mandate and reopen businesses next week while banning counties from fining or jailing people who disregard local measures, in so doing defying previous warnings from Walensky and others.

Greece announced more measures to further restrict movement after recording 2,702 new Covid-19 cases, the highest daily increase since November 19. The number of patients in intensive-care units also rose. Citizens will only be allowed to carry out essential shopping in the municipalities where they live while the use of cars to travel for personal exercise is prohibited, Deputy Citizen Protection Minister Nikos Hardalias said. Measures go into effect on Thursday, 4 March at 6am. The current lockdown in high-risk areas is extended by one week until 16 March.

South African authorities said they’d seized about 2,400 doses of fake coronavirus vaccines after following up on a global alert issued by Interpol warning that criminal networks were trying to cash in on the inoculation rollout. The bogus shots were found at a warehouse in Germiston, near Johannesburg, and three Chinese nationals and a Zambian national were arrested, the police said in a statement. 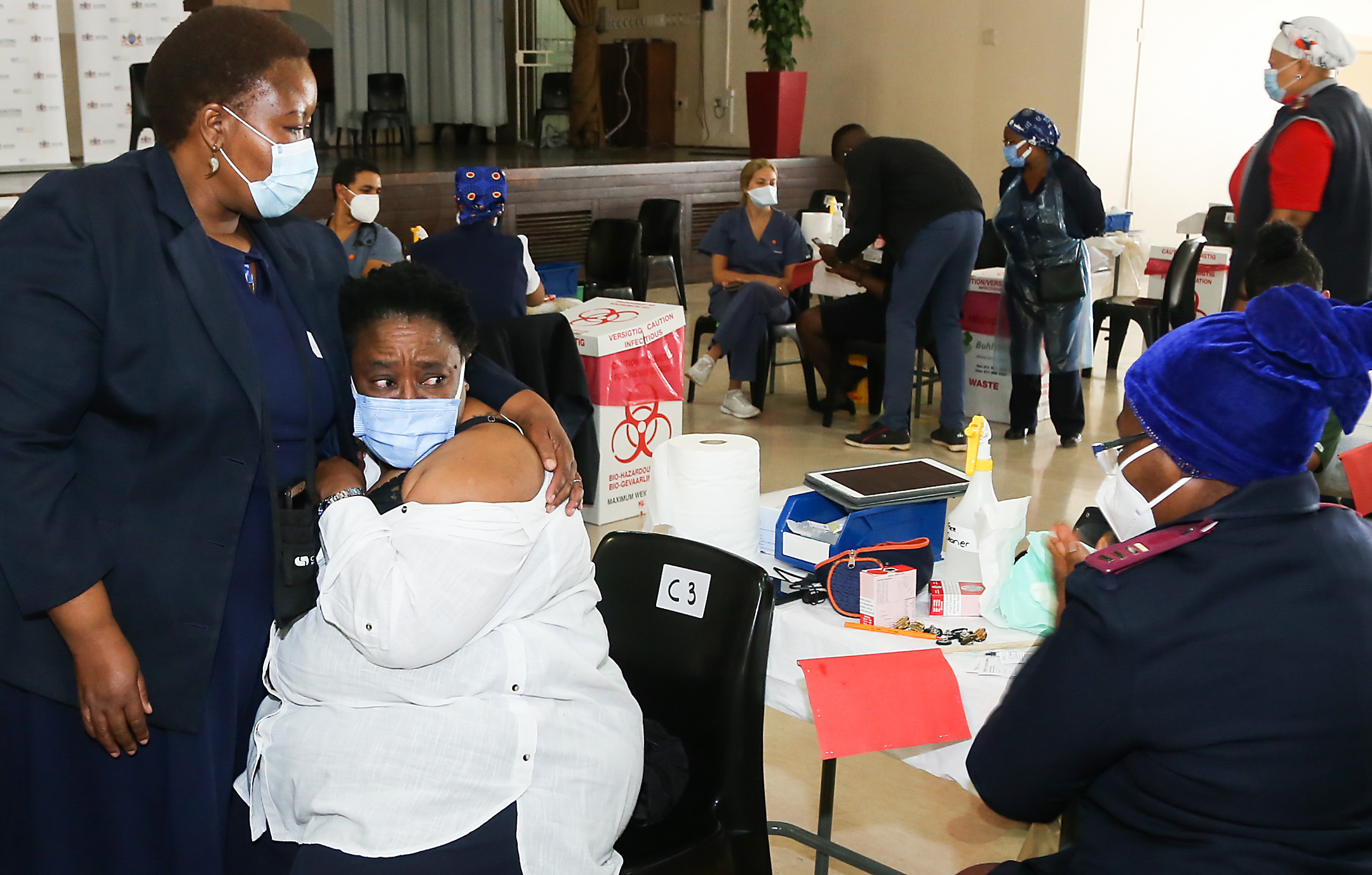 Frontline workers get their jabs during the launch of the Sisonke Vaccine Programme at Charlotte Maxeke Academic Hospital in Johannesburg on 2 March 2021. (Photo: Gallo Images / Luba Lesolle)

Lithuania eased some of its lockdown restrictions to allow contacts between two households outdoors, as well as sports or cultural sessions of up to five people outdoors. The government is also introducing a requirement to hold a negative Covid-19 test taken within the previous three days to be eligible for entry to the country.

A not yet peer-reviewed abstract suggests that messenger-RNA based vaccines may cut severe incidences of the disease against the four most-concerning variants, a Citi analyst said, and that may wipe out the need for future followup shots.

“High rates of vaccination could preclude additional waves of Covid-19, potentially without requiring additional booster or novel vaccines to address variants of concern,” Andrew Baum wrote in a research note. The data suggest that T cell responses in recovering patients or mRNA vaccines aren’t substantially affected by mutations, he said.

Britain’s Chancellor of the Exchequer, Rishi Sunak, extended emergency tax cuts to help the country mired in a third national lockdown, making clear that safeguarding jobs is his priority in the short term. He said he’s adding another £65-billion of pandemic support to help the country recover this year and next.

But Sunak sketched out a plan to start plugging the deficit, with an increase in corporation tax to 25% from the current 19%, taking effect in 2023.

Bharat’s Covaxin demonstrated 81% interim efficacy after two doses in Phase Three clinical trials involving 25,800 patients. The study is still ongoing and the company will release a final analysis after there are 130 confirmed coronavirus cases.

A single shot from AstraZeneca’s or Pfizer-BioNTech’s vaccines protected people aged 80 and over from being hospitalised based on data collected in the UK, supporting the rationale for spacing out injections to protect more people.

Japanese Prime Minister Yoshihide Suga said the virus emergency in the Tokyo region now set to expire on March 7 may need to be extended by two weeks to further rein in the pace of infections.

Suga told reporters a final decision would be made after consulting experts and local leaders. The announcement comes as Tokyo Governor Yuriko Koike and the leaders of the three most-populous prefectures adjacent to the capital were pressing for the extension to stem infections that have fallen, but not as fast as some officials had hoped. DM/MC