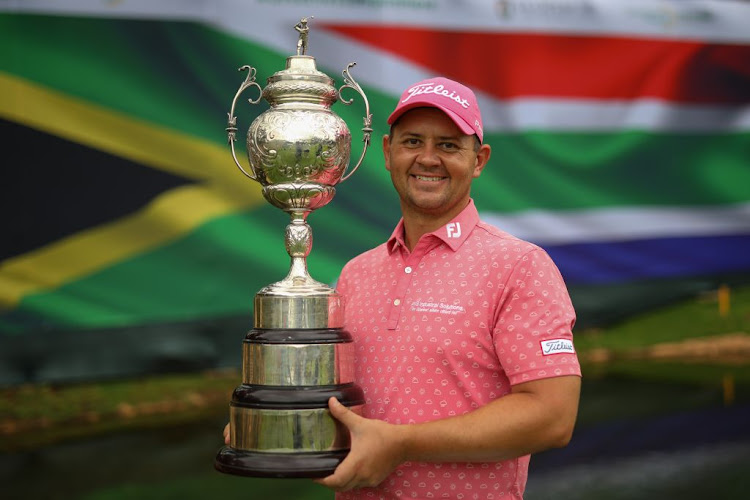 Daniel van Tonder echoed exactly what every domestic golfer dreams of when he said, “I can walk around knowing I’m the South African Open champion.”

With his one-stroke victory at the Gary Player Country Club on Sunday, Van Tonder joined the greats of South African golf in adding his name to this prestigious trophy.

“This is a special win. This is the second oldest Open in golf, and winning it is big. Watching people win it has always looked so good. And now I can say I’m the SA Open champion,” said Van Tonder.

On an overcast and at times wet Sunday at Sun City, Van Tonder produced a magnificent final round of 65 and birdied the final hole to win on 16 under par.

Oliver Bekker took second place on 15 under with a closing 66, and Hennie du Plessis finished third on 12 under with a final round of 69.

The Freddie Tait trophy for the leading amateur went to GolfRSA National Squad member Yurav Premlall who finished in a share of 30th on two under par with a final round of 75.

Sunday morning began with the third round still to be completed, and with Justin Harding taking a commanding four-stroke lead at the end of it. But Van Tonder held his nerve and began his run with a birdie at the first hole. He turned in three under for his round and then produced the kind of back nine worthy of a champion as he made four birdies – including two in his last three holes – to take the title.

The win caps a memorable year for Van Tonder in which he claimed his maiden DP World Tour title and played in two Majors for the first time.

“This year has been incredible, but it’s also been long and hard. We’ve been away for six months because of the travel restrictions. So to come back home and to a golf course I love, and win the South African Open is very special,” he said.

The amateur Premlall was delighted with his Freddie Tait triumph in his fourth appearance in the South African Open.

“I’ve waited a long time for this and it’s something I’ve always wanted. This one means a lot to me,” he said.

PODCAST | When government doesn't do its job, you can't blame the constitution: Mohammed Valli Moosa

Blitzboks all set to light up inaugural Spain Sevens tournament

HILARY JOFFE: Still no open markets for electricity and transport

Why Kaizer Chiefs should not be relying on Samir Nurkovic

Matric 2021: So you’ve passed…exactly what will your results mean?

SIBUSISO KHASA: Back to school, back to pit latrine stink

Class of 2021 had the most pupils writing matric exams

China fails to hold up its end of the bargain, but Biden ‘lacks policy to act’

Emma Raducanu, hampered by a blistered hand, goes down to Kovinic

BP and Shell boost their carbon-trading desks with new hires

'It's common sense': Top quotes from Judge Hlophe on the Zandile Mafe case

News24.com | WATCH | Matric 2021: 'You are the epitome of success', Motshekga tells top achievers at public schools

News24.com | 'The kids have no place to go': Gugulethu crèche principal pleads for help after eviction

News24.com | Woman alleged to have put hit out on family should be denied bail for her safety, court hears

Lights to remain on despite rain and Koeberg shutdown

Egypt: New Egypt Bridge Spells End to Life in City of the Dead

News24.com | Matric results: One of the top pupils credits success to grandmother who raised her after mom died

News24.com | Rioters attack state media journalists in Angola, accuse them of being 'sell-outs'

Bald and the beautiful: Thuli P shaves all her hair off [photos]

Toyota curbs production in Japan as Covid-19 spreads among workers

'It's not correct', says Nathi Mthethwa on journalists not attending PSL games

Extreme heat warning for SA: These 12 districts are on high alert

Nothing average about Van der Dussen and his incredible ODI numbers

Manhunt launched after police officer is shot and robbed at home