Many refugees living in and around Central Methodist Mission in Greenmarket Square, Cape Town, fear what will happen to their children once the bylaw is enforced. (Photo: Sandisiwe Shoba)

The court order against refugees living in Greenmarket Square, Cape Town, has sparked fears among the group, who have no clue where they will go. In seven days the City of Cape Town will be allowed to enforce its bylaw, but numerous complications mean it’s uncertain whether the group will have vacated the area by then.

“This is not right, I’m not satisfied with the judgment,” said Kande Serge Kande, a Congolese pastor living outside the Central Methodist Mission in Greenmarket Square.

Kande was responding to an interim court order granted by the Western Cape High Court, allowing the City of Cape Town to enforce its public spaces bylaw.

The City was not seeking an eviction order from the court, as it has no jurisdiction over the Methodist Church.

However, in its court bid to prevent the refugees from flouting bylaws, the City’s lawyers were questioned by Judge Daniel Thulare and previous Judge Kate Savage about where the refugees would live if the order was granted.

The City had been given the responsibility of providing temporary accommodation for the group of about 600 people, but said it had no space available.

The current order makes no provisions for the City to supply housing. The question now is where the men, women and children in and around the church will go.

The details of the judgment are that the refugees cannot contravene the bylaw in question, meaning that outside the church they cannot:

The refugees are also prohibited from threatening or assaulting City of Cape Town officials and law enforcement, damaging City-owned property and preventing people from entering or leaving the church building.

The order will come into effect only after seven days from 17 February.

Within those seven days, Judge Thulare ordered that the Department of Home Affairs deploy officials to conduct status determination and verification for the refugees. 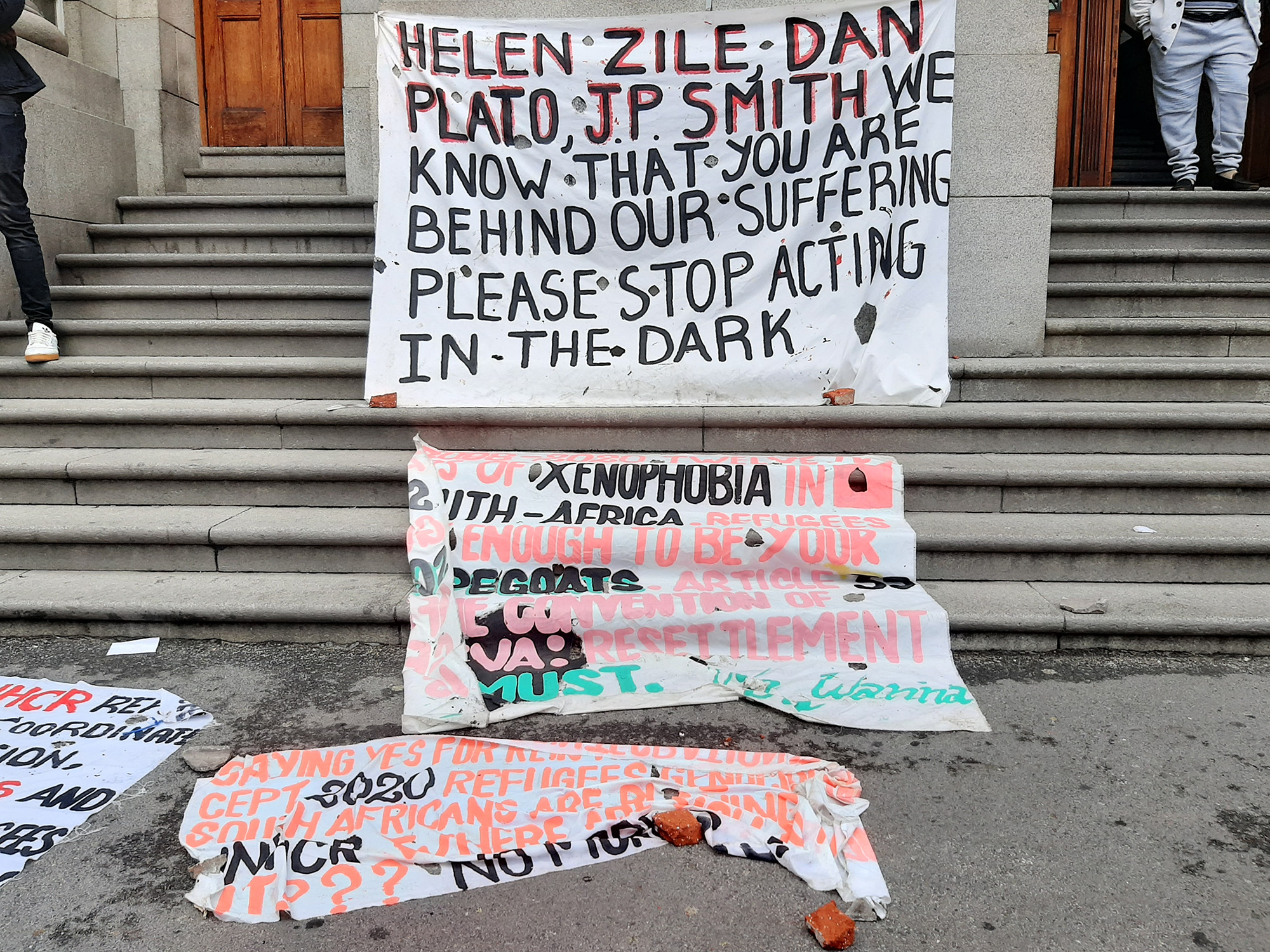 The court order granted by the Western Cape High Court on says refugees living near Greenmarket Square are not allowed to erect tents or sleep on the pavement. (Photo: Sandisiwe Shoba)

The City is tasked with providing a suitable venue for this to take place, and transport.

After the seven-day period, if the interim order is violated, the City can approach the court for a contempt order.

The papers also say that violation of the order permits the Sheriff of the Court (and if necessary the SAPS) to enforce the order.

Internal politics among the refugees pose a further complication. In December 2019, the group split into two factions, one supporting Jean-Pierre Balous who has been recognised as the group’s “official” leader and the other supporting Papy Sukami, a rival who was cast outside the church building along with his followers.

The factionalism has resulted in violent clashes between the two groups, many of which have spilt out on to Greenmarket Square.

Now, with the ruling largely affecting those sleeping outside, it’s unclear whether Sukami’s faction will move back inside the church building.

Sukami, who according to his bail conditions has been conditionally banned from the CBD, says it is unlikely his group will move back inside the church:

“There are not enough places inside the church. We have nowhere to go,” he said.

Sukami was released on 9 January after being arrested on charges of assault and robbery.

Kande fears violence if he attempts entering the church building:

“If I dare go inside there, maybe I will die.”

Businesses and traders in Greenmarket Square have complained that protesters have occupied parts of their business area. Some have been sitting on the stoeps of hotels in the area and have refused to leave when asked, according to court papers.

As a result, guests have been driven away and word has spread that Greenmarket Square is a no-go area with the threat of harassment or violence and unsanitary conditions. Now, many traders have lost customers with some having to close shop.

Nadine Kabanga Nkurikiye, a Burundian living in the church, says she won’t return to her community even if the conditions in the church are unlivable. 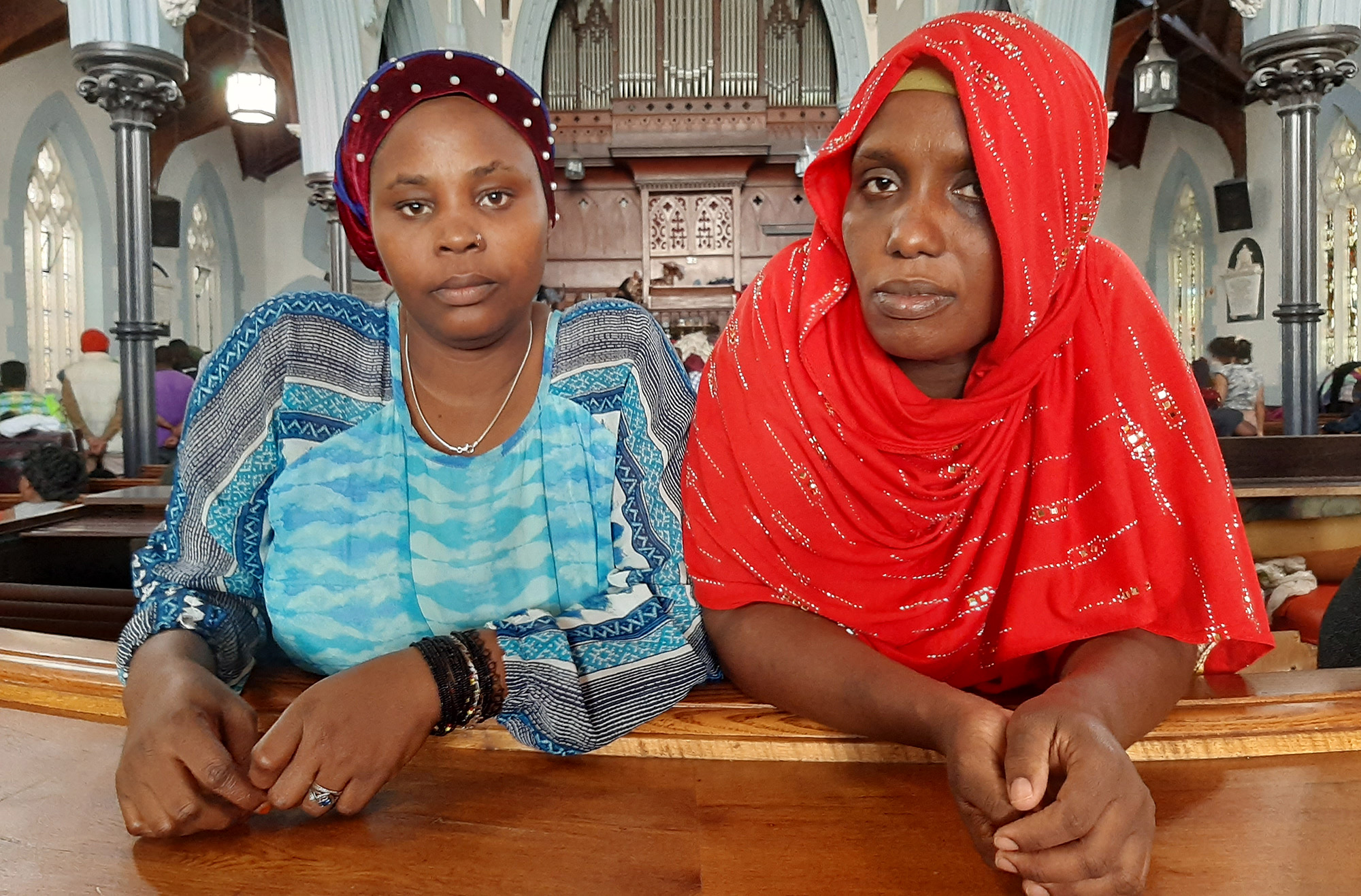 Adidja Nzeyima, left, and Nadine Kabanga say the judgment handed down by the Western Cape High Court was expected from a ‘xenophobic country’. (Photo: Sandisiwe Shoba)

“This is not comfortable, but the condition in the church, I will survive it, until I go to a safe place,” she said.

Judge Thulare told the court that the City and municipalities had an obligation to assist refugees who were in “distress” and felt they could not return to their communities.

The order says the refugees must provide the City (or their municipalities) with personal details, fingerprints and photographs, and sufficient facts to prove their lives are at risk if they go back to their residences in South Africa

Nkurikiye insists that the group is still holding out hope that they will be resettled, despite repeated assertions from the United Nations High Commissioner for Refugees (UNHCR) that group resettlement is not possible.

Spokesperson for the UNHCR in South Africa, Heinn Shin, said the agency was still engaging with refugees in South Africa, though they didn’t stipulate if they were in direct contact with the protesters in Cape Town.

“We have our partners on the ground who are accessing and assisting those with acute needs,” said Shin.

Refugees had the option of being reintegrated into their communities with assistance from the Human Rights Commission, which had stepped in as a mediator for the group. The commission, however, decided to stop helping the refugees after Balous threatened Western Cape SAHRC commissioner Chris Nissen during the last court appearance on the matter on 28 January.

In a statement, released on 29 January, the commission wrote:

“In light of the attack on the Commissioner Nissen’ dignity and integrity — and by implication, against the commission as a whole — the Commission can no longer be involved in any further engagements regarding the matter.”

In court Judge Thulare criticised Balous and Sukami for “deceiving” the refugees, some of whom were “vulnerable” and “abusing the right to protest”.

“The respondents have for all intents and purposes established a self-governing territory within the City of Cape Town,” said Judge Thulare who added that the City was well within its rights to enforce the bylaw.

In a statement released on Monday, the City “welcomed” the ruling and indicated its willingness to comply with it:

“We are relieved that the court has recognised the need for municipalities to be able to enforce its bylaws to ensure its proper functioning,” wrote mayor Dan Plato.

The refugees have until 17 March to oppose the order. DM

Healthcare workers did not contract COVID-19 from patients, says department