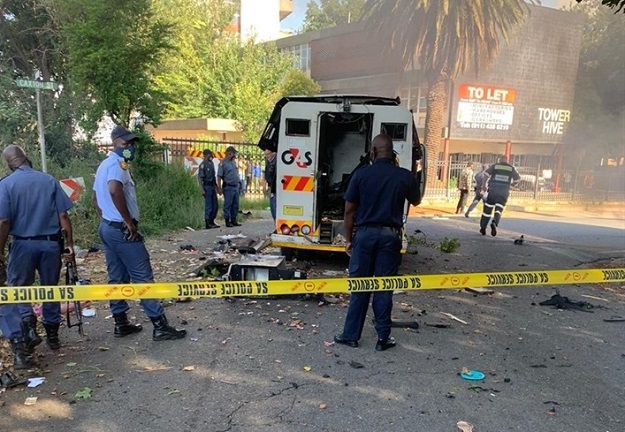 Police at a scene where a cash van was robbed in Langlaagte, outside Johannesburg

An armed suspect was arrested, and four alleged robbers were killed during a shootout with police in Katlehong, in Gauteng.

The deadly shootout happened after police cornered the group, who had earlier allegedly robbed a cash van on Friday morning.

Police spokesperson Colonel Brenda Muridili said a group of armed men accosted a cash van, blew it up with explosives and gained access to the safe.

“The suspects then fled with an undisclosed amount of money, leaving a vehicle they had used to ram the armoured vehicle off the road burning. A security guard was rushed to hospital for treatment of a gunshot wound to the head,” said Muridili.

Following the robbery, the national Crime Intelligence (CI) activated the SAPS airwing, Limpopo and Mpumalanga Tracking Teams with the assistance of EMPD Swat and JMPD K9 to track the suspects. Information received, led the team to a safe house in Katlehong, where the suspects tried to shoot their way out.

“One suspect was arrested while four others were fatally wounded. The team has launched a manhunt for the suspects that managed to flee the scene. Upon searching the premises, officers recovered two police radios, an unlicensed firearm and two vehicles, one which had been hijacked in Katlehong last month and the other hijacked in Sandton two weeks back,” Muridili said.

The suspect is expected to appear in court soon facing charges of murder, attempted murder, armed robbery, possession of stolen vehicles, and possession of a prohibited firearm and ammunition.

Mestalla one on one with nature: without fans the stands at the Valencia stadium are overgrown with grass 🌿
Guardiola on the end of the series: Sometimes you need to lose to understand how difficult it is to win 21 times in a row
Manchester United surprised by the pressure. They also stopped Gundogan (sacrificing the density in the support area), but KDB could bring City back into the game
Real Madrid director Butragueno on Atletico player's hand: It's a penalty. We were again unlucky with referee Hernandez
Mourinho on Tottenham's 100 goals of the season: Not bad for a defensive and poor team
Coman has rejected Bayern's offer of a new contract until 2026
Holand's transfer is a priority for Real Madrid. The deal could cost 270 million euros (As)

News24.com | Delay in Bushiri extradition hearing after lawyer asks for recusal of magistrate

South Africa: Interview - From Humble Beginnings to Vaccinating the President

Australia look ahead to World T20, Ashes after poor season

Search continues for two missing teenagers suspected to have drowned

Kenya: You Are Safe From British Farm Goods, Farmers Told

Mbalula hits back in Twitter spat with Lungisa, Niehaus

GROUNDUP : Former employee gets go-ahead to sue Mpumalanga Premier after being attacked by protestors while at work

Woman dies after car goes off cliff on Chapman’s Peak

READER LETTER | Churches must obey the law of God

BOSTON GLOBE: Saudi crown prince should be a pariah

WATCH | ‘We are stressed, tired and burnt out,’ SA doctor tells Prince William and Duchess Kate

The unacknowledged reason for the storm around Mogoeng Mogoeng

Pinetown woman fatally stabbed in neck during a home invasion

Trust-to-Trust: A perspective on beneficiaries’ rights

A tribute to Dick Ralushayi

WATCH: Chaos as scuffle breaks out at Canal Walk

China is still leaving no space for women on company boards

Five things to know about the new 2021 Toyota Urban Cruiser

Uganda: Pressure Mounts On U.S. to Act On Uganda's Abuses

Gambia: Did Jammeh Order the Killing of Migrants?

Merafe lays off nearly 1,000 staff and warns about Transnet issues

Woman dies after car goes off cliff at Chapman’s Peak

’Covid-19 has highlighted the importance of collaboration’

'Kate made me cry': social media reacts as Meghan sets the record straight

No approved Covid-19 vaccines are available for sale, warn police

Fourth 'Jumanji' film is '100 per cent' in discussions