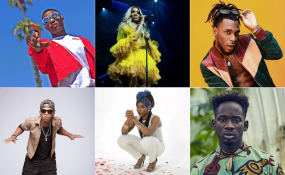 Some Nigerians have began the Grammy nominations campaign for Nigerian artists featured on Beyoncé's 'Lion King: The Gift' album.

Beyonce, who executive produced and curated the album, as a personal project inspired by 'The Lion Long', described it as a love letter to Africa.

At the time of this report, songs and artists on the album were trending from one to 20 on Twitter, with some Nigerians advocating for a Grammy win for the artists featured.

Mavin record's boss, Don't Jazzy tweeted, "It's safe to say Our people are finally getting that Grammy hehe.

"Because beyonce go Dey world category this time around haha. And once the album wins world album of the year. Gbas Gbos."

@Omojuwa said, "If I was a Nigerian act, even without being featured, I'd see this album as an opportunity.

@Olushola said, "Finally we are getting to the Grammy hehehehe. Afrobeat sailing."

@Omojuwa said, "Wizkid in Brown Skin Girl is a

@Michealdollar tweeted, "Goosebumps after listening to brown skin girl. @wizkidayo you killed it."

NAN also reports that fans hailed Burna Boy, who is the only artist with a solo feature, for bringing Afrobeats sounds to the world with his song, 'J'Ara e'.

@LawrenxeEbi tweeted, "Burna boy was the only one who stood alone, in someone else's album!! Energy>>>."

@Thereal_fabian said, "Burna boy really had his own song on this Beyoncé gift album.

"When he told you he is an African giant, you all thought he was joking.

"Shout out to wizkid, yemi alade, tiwa savage, tekno. You guys made Africa proud. Afrobeat to the world."

'The Lion King' which inspired the album will premiere in cinemas on Friday.

Кад Cadiz returned to La Liga after 14 years
Pioli about 2:2 with Napoli: One point is a good result
Gattuso on Milan's penalty: the Rule needs to change. Jumping with your hands behind your back is another sport
Milan will offer 25 million euros for Celtic defender Ayer
Klopp on plans: Four years at Liverpool. After that, I want to do nothing for a year
Rogers Pro 1:4 with Bournemouth: Leicester play well only 45 minutes after the break
Inter and Roma are Interested in Garay
Source https://allafrica.com/stories/201907200110.html

ANALYSIS: Three quick and simple moves that could be economic game changers for South Africa

MAVERICK CITIZEN: Making sense of the complex world of vaccine development for Covid-19

MAVERICK CITIZEN KZN: While KwaZulu-Natal is still relatively calm on Covid-19 front, the storm is approaching

OP-ED: Covid-19 grants are making a difference in this little Namaqualand town

OP-ED: Reflections of a Wayward Boy: Hairybacks, ‘soutpiele’ and an accidental member of the ANC

Covid-19: Ramaphosa: ‘The surge has arrived. The storm is upon us’

2020 US PRESIDENTIAL ELECTIONS: From niece’s tell-all book to Supreme Court tax record ruling, it’s been one hell of a week for Donald Trump

BUSINESS MAVERICK OP-ED: Keep an emergency fund, particularly if you are a pensioner

BUSINESS MAVERICK ANALYSIS: The ANC and business are still talking past each other

STREET LIFE: Slabtown, Stellenbosch: People live here, but they dream of something better

MOTORING: The Ineos Grenadier wants to take over where the old Land Rover Defender left off

RIGHT OF REPLY: Khayelitsha land invasions a shame for thousands of residents

OPINIONISTA: Parliament can uphold the Constitution by passing the Copyright Amendment Bill — again

OPINIONISTA: Pat Symcox and Boeta Dippenaar are on the wrong side of history

OPINIONISTA: Removing the prong from the fork that caused the pain

OPINIONISTA: Municipal oversight bodies must be beefed up to protect against human rights abuses by police

News24.com | EDITORIAL | Be angry at partygoers, not Ramaphosa, for new booze ban

Namibia: Ruling Party Did Not Get Fishrot Money - Geingob

PRESIDENTIAL ADDRESS: ‘The sale, dispensing and distribution of alcohol will be suspended with immediate effect’

SA to remain on level 3 but alcohol sales ban and curfew are back: Read President Cyril Ramaphosa's full speech

News24.com | 'This is a fight to save every life': Ramaphosa bans booze, enforces masks and announces curfew

Newsdeck: Hamilton raises a fist after his first win of the season

We will listen to all sides, Cele says about deadly attack at IPHC

News24.com | Alderweireld leaves it late to give Spurs victory over Arsenal

No caddie, no problem as Warren ends six-year title drought

Stage 2 load shedding to continue until 10pm, resumes at 9am tomorrow