OP-ED: Covid-19 has taught us we cannot separate social from environmental justice

Firefighters back burn, in an effort to control the Bobcat fire in the Angeles National Forest near Arcadia, California on 13 September 2020. (Photo: EPA-EFE / Etienne Laurent)

With more than 200 days of lockdown disruptions under our belts, many of us have found that our understanding of the world in which we live has shifted and we don’t want to return to (ab)normal, nor should we.

In South Africa, as it is around the world, many questions are being asked about how we go forward from here. This year of lost normality has made starkly clear how beleaguered we are, not just by climate uncertainties and environmental degradation, but by the impossibly widening gap between the privileged few and the many who live on the margins.

In 2015, Pope Francis asserted that “we have to realise that a true ecological approach always becomes a social approach; it must integrate questions of justice in debates on the environment, so as to hear both the cry of the Earth and the cry of the poor”. 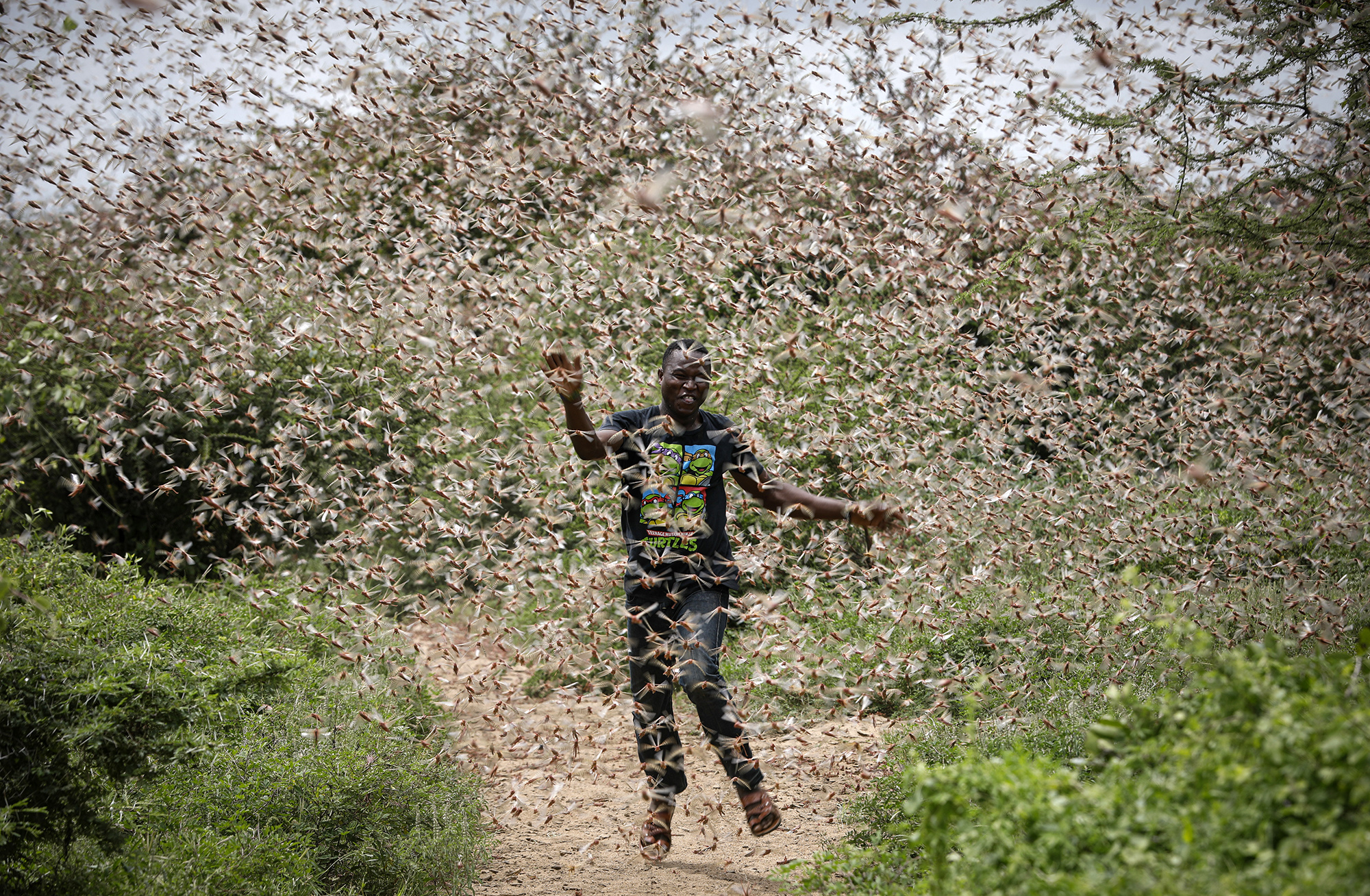 Farmer Theophilus Mwendwa runs through a swarm of desert locusts to chase them away in the bush near Enziu, Kitui County, about 200km east of Nairobi, Kenya, on 24 January 2020. (Photo: EPA-EFE / Dai Kurokawa)

In this interpretation, there’s no artificial separation of environmental and social justice. It’s a recognition that these are one and the same, informed by a historical understanding of how we got to this point and an emerging understanding of the forces shaping our future.

This interweaving also recognises that the very drivers that deplete and degrade our environmental resources are the same forces that deprive people of their livelihoods and cause the cultural and familial underpinnings of the social fabric to fray and collapse.

What was true five years ago has become ever more apt in this most unusual of years. 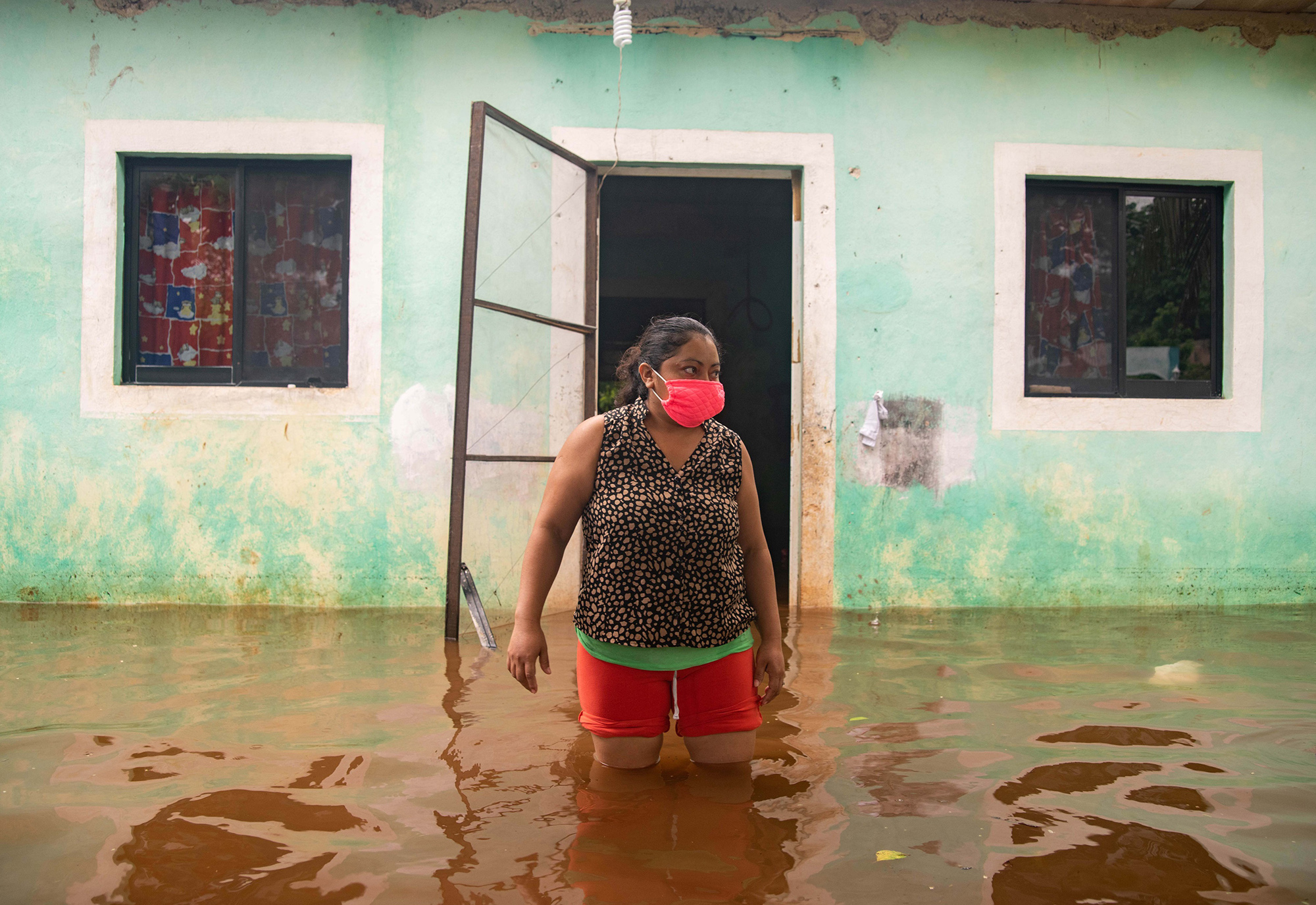 A woman navigates a flooded street near her home in Tecoch, Yucatan, Mexico, on 3 June 2020. (Photo: EPA-EFE / Cuauhtemoc Moreno)

The world over, national and local lockdowns have highlighted the contrast between the lives of the haves and the have nots. While Hollywood celebrities lamented the inconvenience of having gigs cancelled and having to remain home in their mansions without access to their hairdressers, the hundreds of millions of people living hand to mouth across the globe struggled to find sustenance.

In South Africa, the most unequal nation on the planet, this was especially apparent with white suburbia baking banana bread, brewing pineapple beer, clocking garden marathons and devouring Netflix’s latest releases while 55% of the nation struggled to feed their children.

The dispiriting irony about these contrasting daily lived experiences within the economic lockdown is that those who have the hardest time of it are usually the least responsible for creating the predicament in which the world now finds itself. The same is true for the fallout that results from extreme heat, floods, drought, air pollution – so the list goes on. 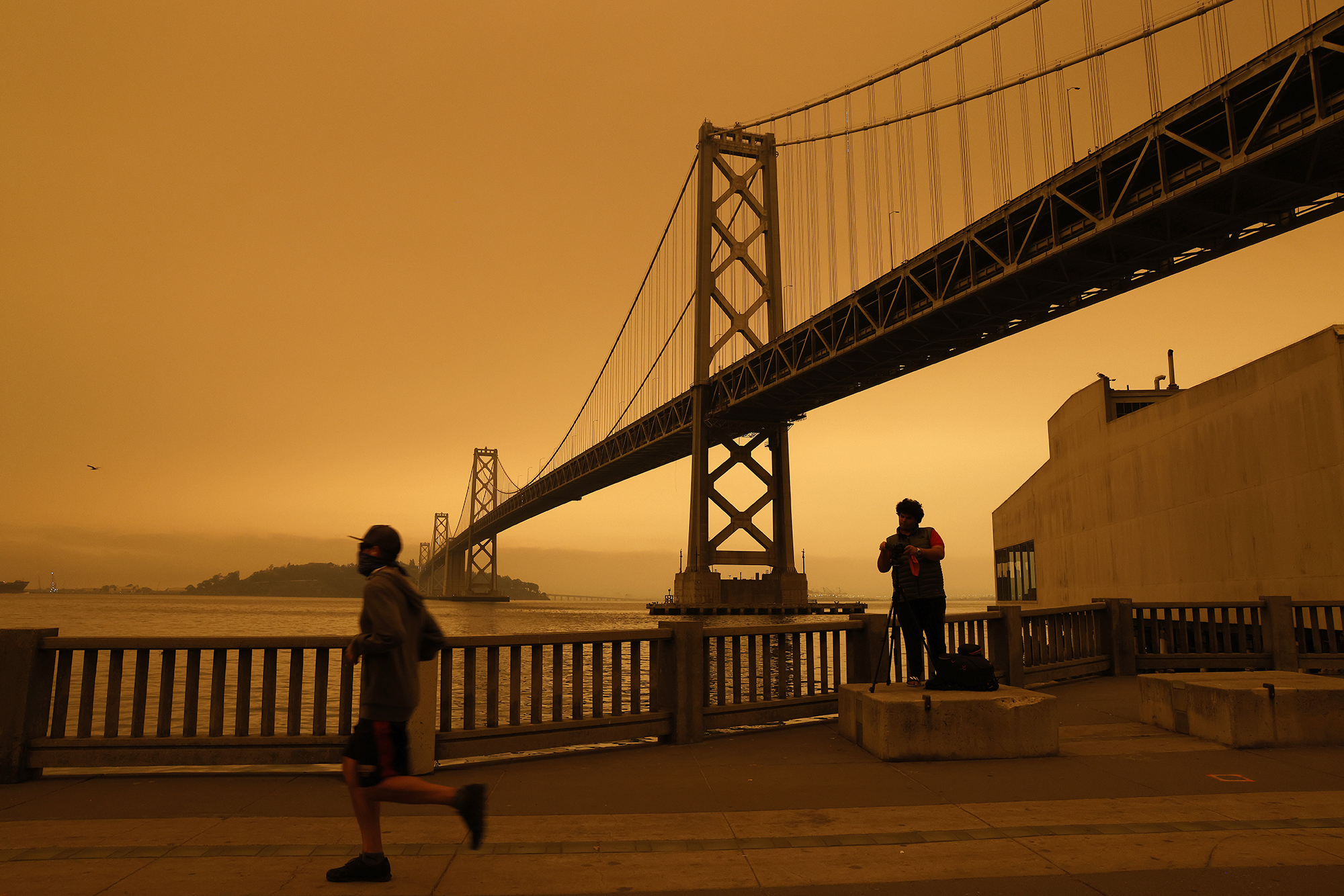 We live in a deeply interconnected world.

Interdependency in social, economic, technological and ecological systems means disruptions in one sends shock waves through all, and are invariably compounded in the lives of the poor.

Six degrees of separation is the idea that all people on average are six, or fewer, social connections away from one another. As a result, a chain of “a friend of a friend” statements can be made to connect any two people in a maximum of six steps. A few years back, teenagers were trying to map out the six degrees between themselves and various celebrities.

Cue Covid-19 in 2020 and suddenly just how connected we humans actually are, not only with one another but also with the natural world, was laid bare. 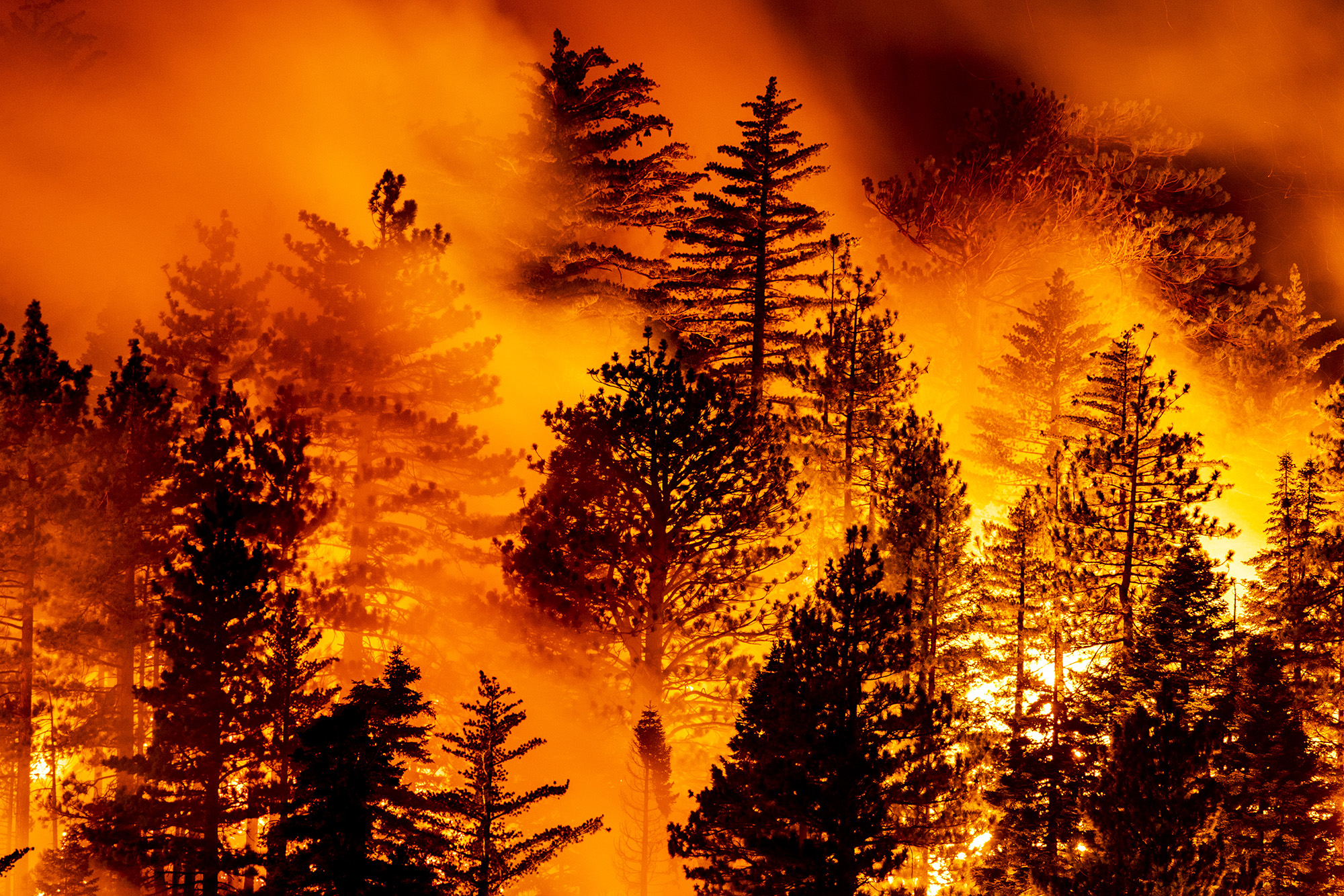 The Bobcat Fire progresses in the woods in the Angeles National Forest north of Monrovia, north-east of Los Angeles, California on 11 September 2020. (Photo: EPA-EFE / Etienne Lauren)

Indifference to the implications of this interdependency precipitated the zoonotic spillover that allowed the virus to jump from one species to another and has us in the middle of a global pandemic that spread from China through the world’s population in a matter of weeks.

Devastating as Covid has been, there are still some measures most of us can take to avoid it, or at least minimise our risk. Not so for the climate threat, which will leave the already vulnerable utterly powerless to protect their livelihoods and themselves. In this way we can see the coronavirus as a precursor; the first big global disruption as we enter a profound period of unpredictable climate change.

The Western Cape has already weathered the threat of Day Zero once, and now climatologists predict that recurrence of such an event is three times more likely than it should be. 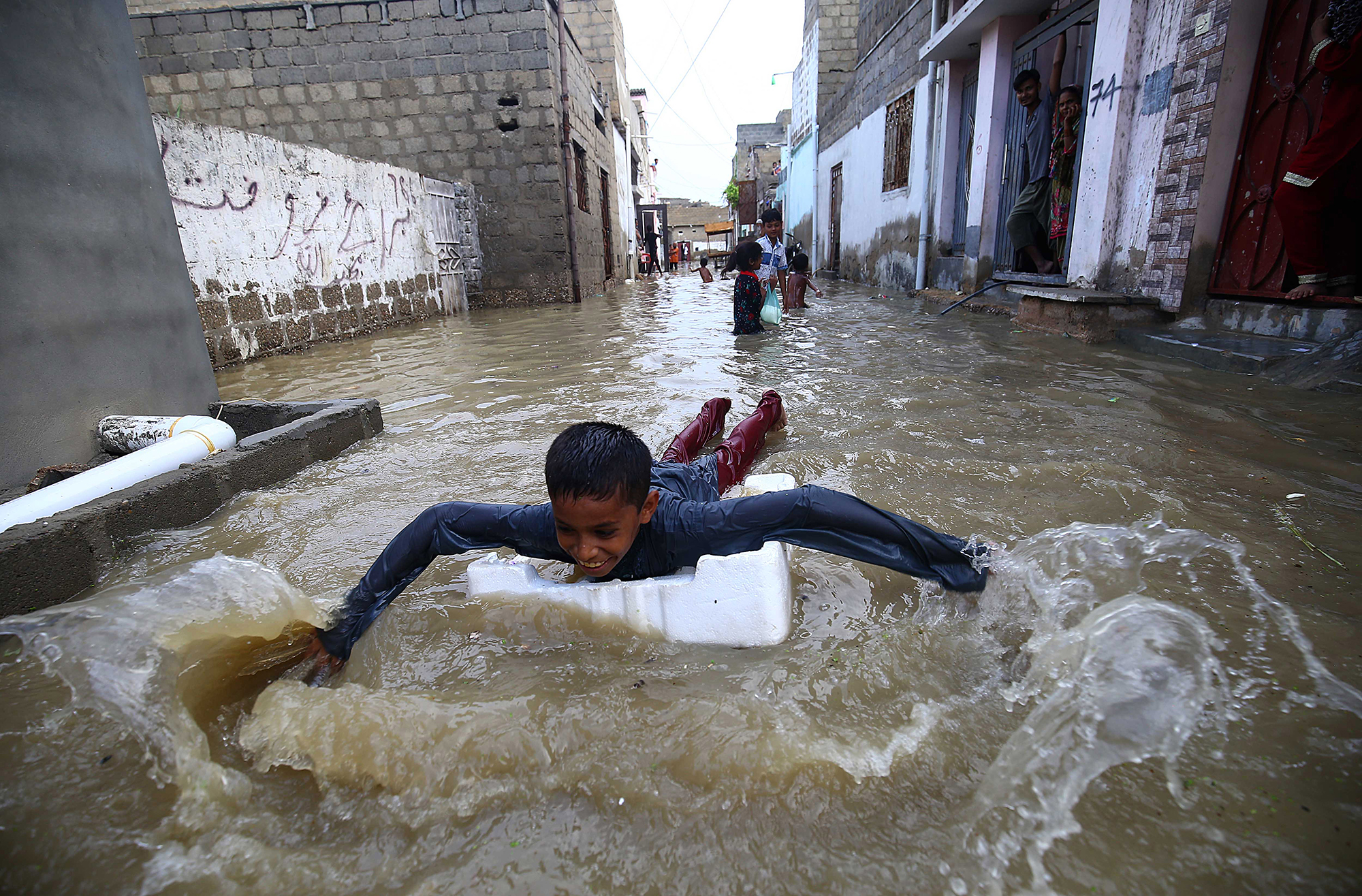 We have seen a rise in diseases and pests affecting agriculture; we know that land transformation and intensive livestock production are direct and indirect drivers of zoonotic pathogens – increasing the possibility for spillover events like Covid-19; climate disruption is escalating and we will continue, in growing numbers, to be dependent on finite natural resources.

The IPCC estimates that we have 10 years to ward off some of the most disruptive climate impacts. That’s a pretty small window in which to recalibrate, realising that the things we don’t fix now may well be solidified as permanent dimensions of the new (ab)normal.

Averting the potential human and environmental toll requires collective efforts to effect just transitions in many of our natural resource provisioning systems. Key to this is rethinking the food system, which doesn’t work for most people – or for our natural environment. 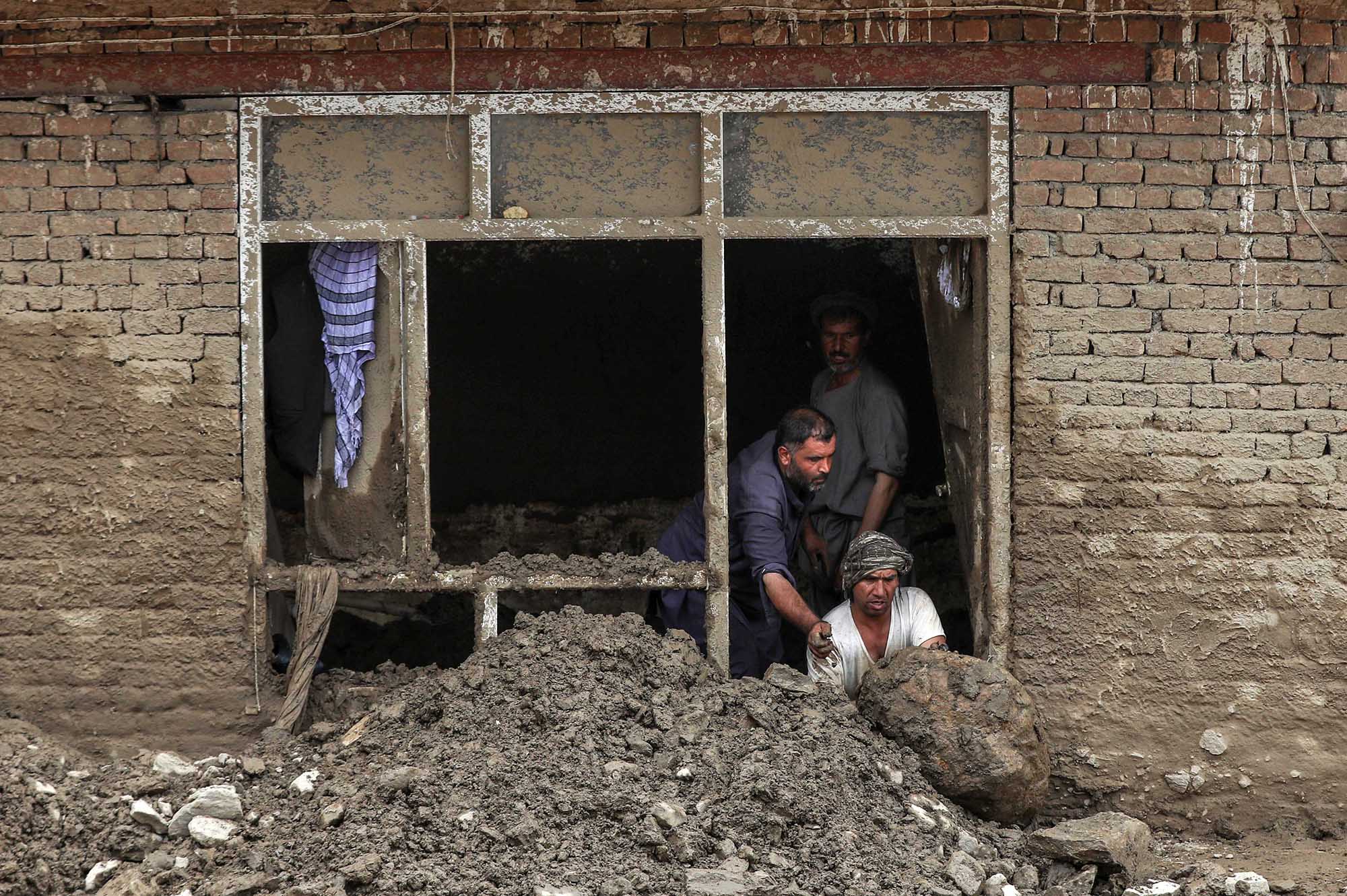 Afghan family members clean their home after heavy floods in the Charikar city of Parwan province, Afghanistan, on 26 August 2020. (Photo: EPA-EFE / Hedayatullah Amid)

A report published earlier this year by the FAIRR global investor network found that 70% of the biggest meat, fish and dairy producers risk causing future zoonotic epidemics owing to lax safety standards, closely confined animals and the overuse of antibiotics.

South Africa’s lockdown exposed the vulnerability of our local food system, resulting in significant issues with food security in vulnerable communities and the marginalisation of 40% of people dependent on informal provisioning systems, impacting hunger, livelihoods and the economy.

In our conversations around reopening and regearing the economy, there is little or no space given to the tenets of ecological justice, which require a shift in the way we value people.

We need to recognise discrimination for what it is. 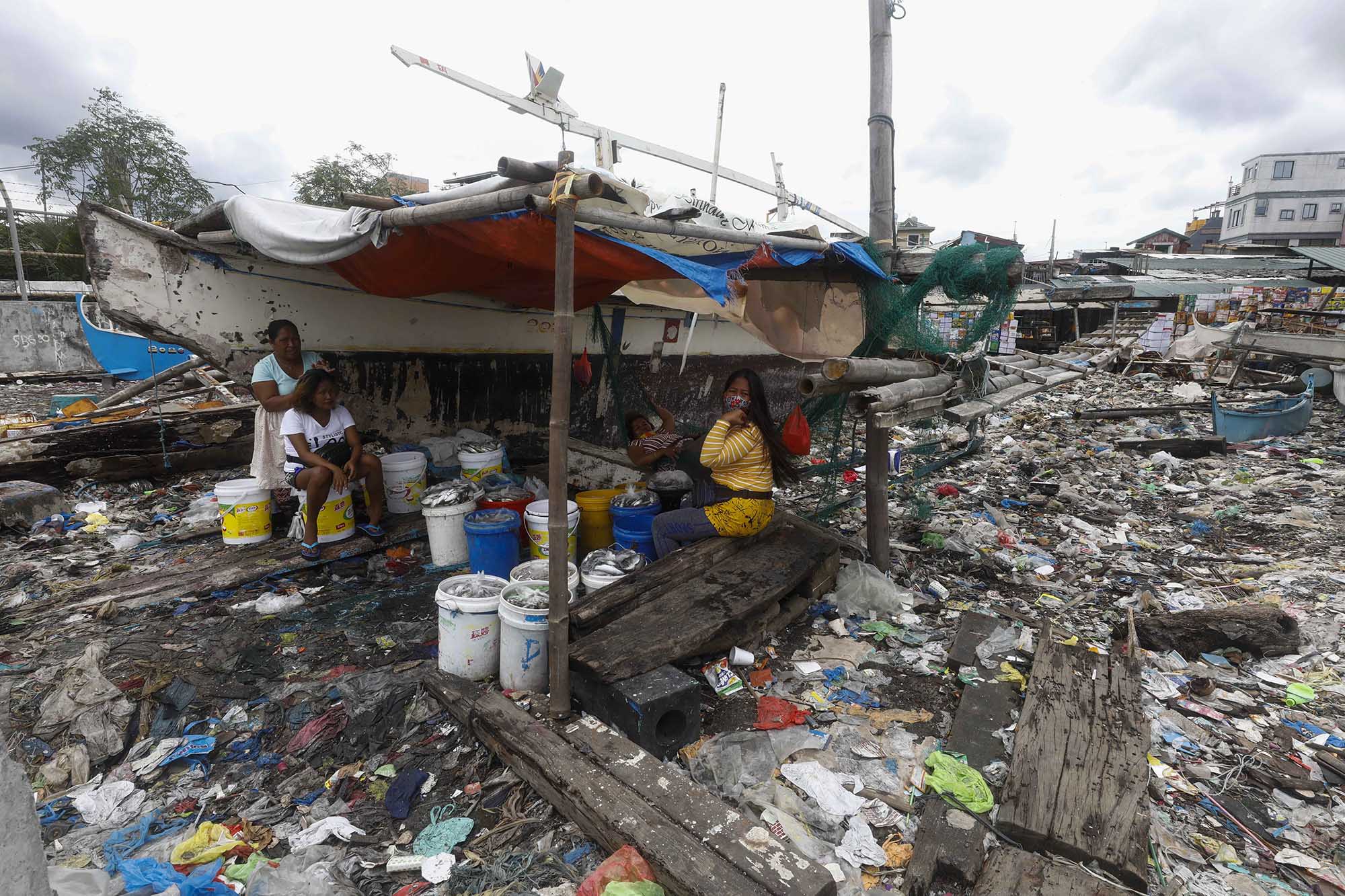 South Africa didn’t become the world’s most unequal nation by chance. Institutionalised discrimination and insufficiently pro-poor policies resulted in stark inequality. The converse will be just as true; it’s not chance that will lead to ecological justice, but rather concerted efforts to shift policy in favour of human and ecological well-being.

Some such efforts may include elevating indigenous knowledge systems and restoring access to ancestral lands, incentivising corporates to take a more intentional role in both environmental and human health, and, crucially, informing individuals of their agency in this regard.

Finally, all these changes – good policies, individual dietary shifts and so on – don’t necessarily translate into system-level changes and can have unintended consequences. However, that’s no reason not to act – and to act rapidly. 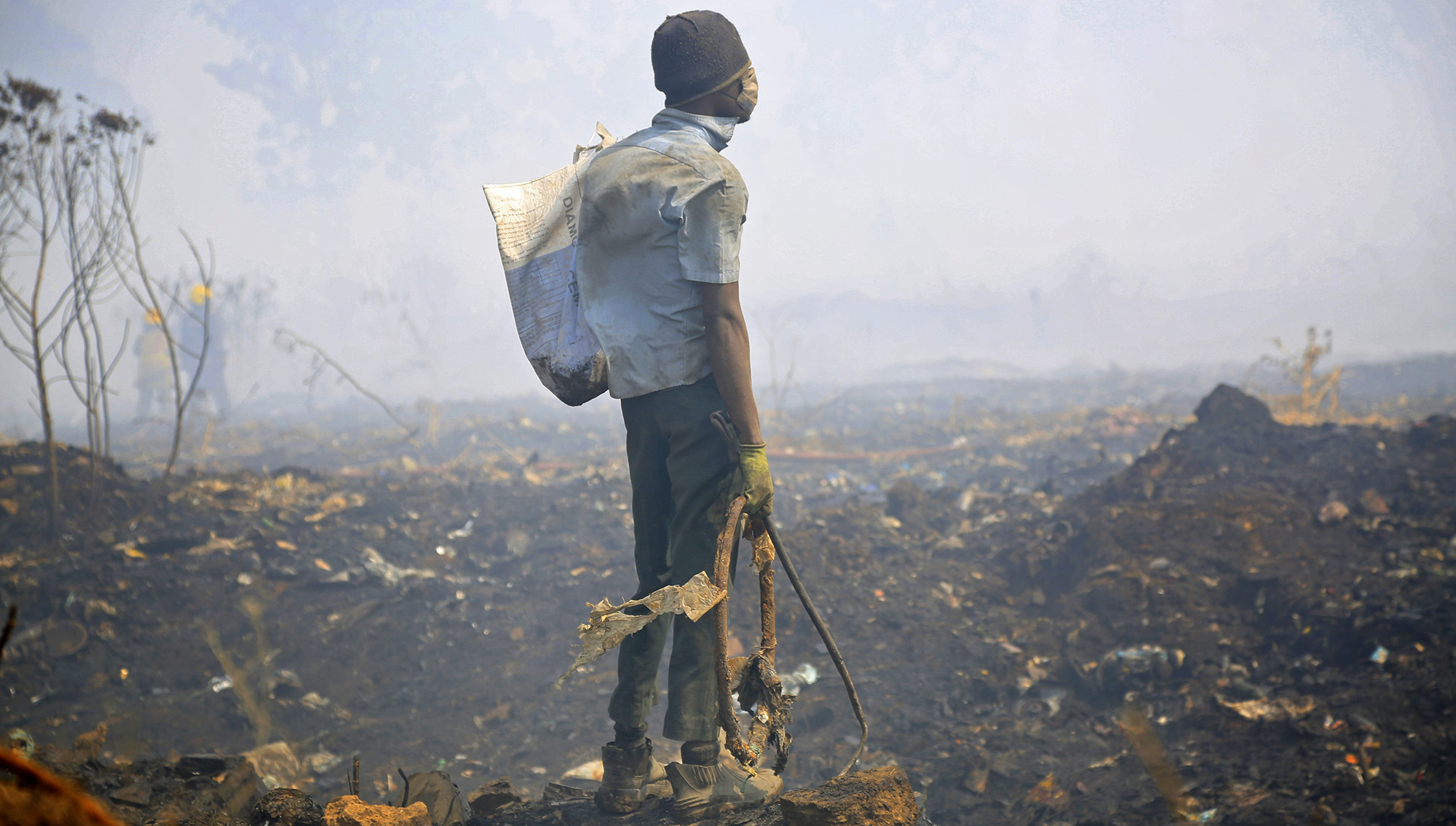 A man stands in smoke from a fire at a dumpsite in Harare, Zimbabwe on 18 August 2020. (Photo: EPA-EFE / Aaron Ufumeli)

“The very foundation of our social method of organisation is changing, for all sorts of reasons, but most clearly because of rising inequality and unchecked exploitation of nature.

“We need to ask, what do we fundamentally need to establish in the human-nature relationship?”

Scholes said that “shift within a complex adaptive system requires that we are continuously reflective. There’s no silver bullet in the management of complex systems.

“We need to ask whether we’re part of the problem, whether our assumptions are correct, and then we must be willing to admit our own failings and course correct.”

This is not a space for narrow ideologues who cannot adjust.

We are entering uncharted territory; a reality in which we will be learning by doing. Ecological justice provides a beacon, ensuring that the changemakers are guided by principles that at least allow them to have an opinion of what route not to follow, even if it’s impossible to be sure of the shortest route to a just and equitable future. DM

Tatjana von Bormann is both Impact Lead, WWF South Africa and Chair of the Advisory Board of the Southern Africa Food Lab.

Holand continues to insist that he is a monster. Fastest in the history of the Champions League scored 15 goals (and added 16)
Koeman on the victory over Dynamo Kyiv: We achieved our goal-we reached the playoffs
Solskjaer on 4:1 with Istanbul: Manchester United played intensely, enjoyed the match. We want to be 1st in the group
Forward Ferencvaros Troll Cristiano: celebrated a goal in his style. Ronaldo responded with a goal and a very angry look
Morata scored 5 goals in 4 games in the Champions League for Juve. His best result is 5 in 12 games in the 2014-15 season
Holand has scored 15 goals in the Champions League the fastest. 7 games better than the record
Ludicrous omission of the Champions League match: the Brugge forward did not want to transfer to the bus, and he was kicked out
Source https://www.dailymaverick.co.za/article/2020-10-26-covid-19-has-taught-us-we-cannot-separate-social-from-environmental-justice/

Finding Your Way Into Blockchain: A Black Crypto Expert On Being In The Room Where It Happens

OPINIONISTA: The age of reckoning is upon us: Bring it on and arrest Jacob Zuma

OPINIONISTA: People first: Getting to the root of degrowth in South Africa (Part Two)

OPINIONISTA: Annual 16 Days of Activism: We need to interrupt the status quo

CHRONICLE OF A DEATH FORETOLD: Slain gangster Ernest Solomon’s warning: ‘People die every day because of this story of the Number’

PHOTO ESSAY: Deep South Vibes: Kataza’s ‘homecoming’ – Can we all get along?

2020 US PRESIDENTIAL ELECTIONS: The resumption of normal service slowly begins after the madness of Donald J Trump

OP-ED: Ace Magashule and the political limits of the ANC NEC ‘Step Aside’ decision

OP-ED: ConCourt’s Mahlangu judgment is a victory for domestic workers — but more needs to be done

BUSINESS MAVERICK OP-ED: Pay up promptly: 30 days might just be enough to save SMEs

SPOTLIGHT: We should put people living with HIV at the centre of HIV prevention efforts

News24.com | Limpopo court hears man accused of ordering hit on his wife is a threat to witnesses

Melt Hamman to leave Attacq at end of April 2021

News24.com | Prasa tells Parly it is on the mend, some MPs still skeptical

'Nothing nefarious': Editors weigh in on WhatsApp group disinformation campaign

Omnia gets the chemistry right in hard lockdown

SA confirms going for COVAX vaccine scheme for 10% of population

News24.com | Rapist who lured unemployed women with promise of work sentenced to 3 life terms plus 134 years

Investors cheer Coronation results despite no sign of end in outflows

'When people protest, it must be peaceful': 5 key findings from SAHRC's Brackenfell investigation

Tributes continue to pour in for late Kimi Makwetu