On 4 August 2020, it was a month since the constitutional amendments were introduced that allow Russian President Vladimir Putin to remain in power until 2036, when he will be 83.

Russia’s Central Election Commission announced that 77.92% of voters supported the constitutional changes, while 21.27% voted against. Turnout was 67.97%. While this might look like a “triumph” of democracy, it is clear that Russia has drifted even further from officially declared democratic principles.

Putin – forever and ever, amen

In January 2020 Putin announced his decision to amend the constitution. Russian experts started to question whether this would be an attempt at presidential power extension. Putin, however, denied this, preferring rather to speak about the need to decrease presidential power, to ensure social protection and preserve the historical unity of all Russia. There was no suggestion of extending the president’s powers, which made experts puzzle about Putin’s real motives. 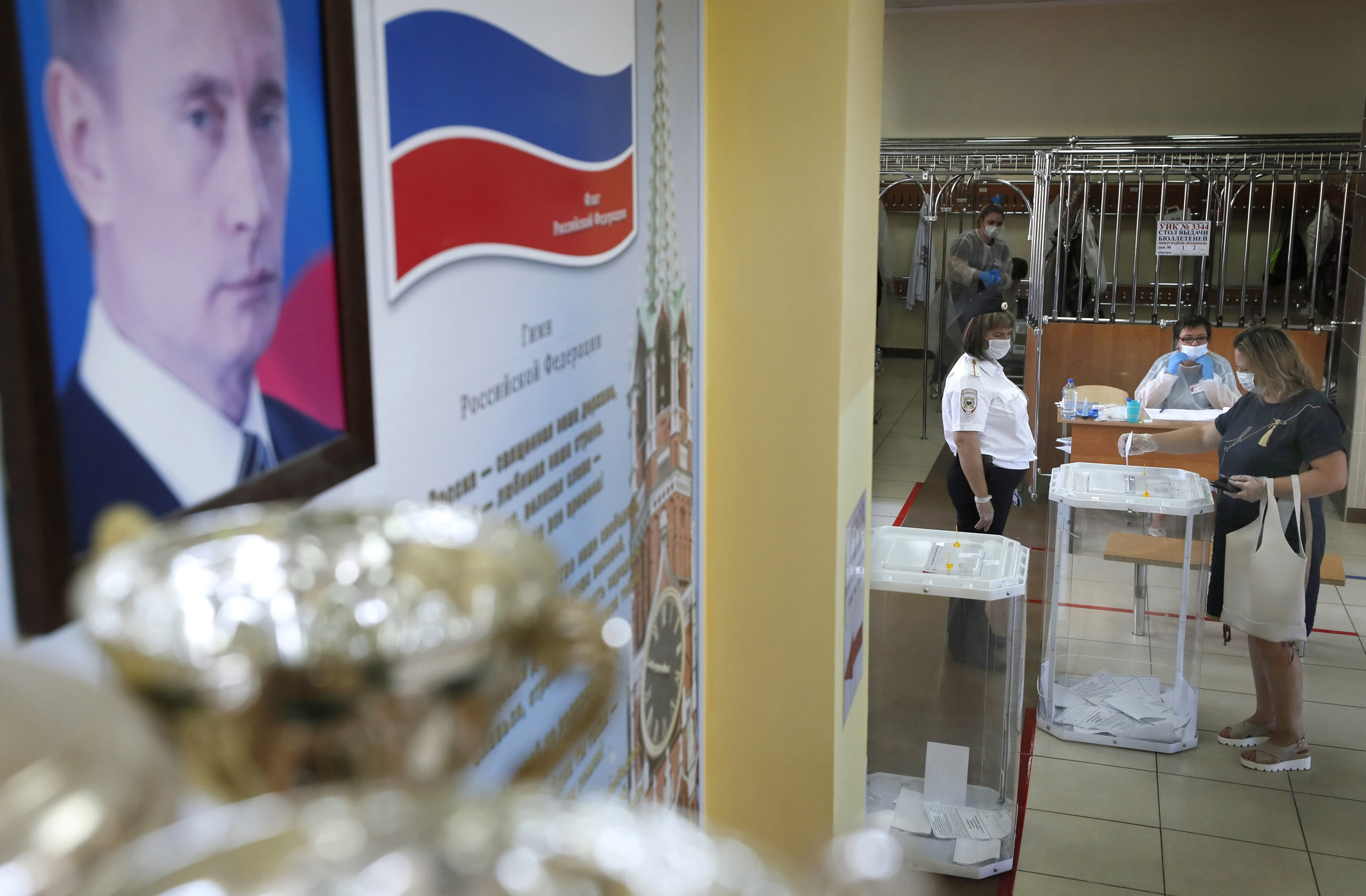 A woman casts her ballot during the main day of a nationwide vote on amendments to the Russian constitution next to a portrait of Russian President Vladimir Putin at a polling station in Moscow, Russia,1 July 2020. (Photo: EPA-EFE / Maxim Shipenkov)

It was only during the discussion about the amendments that the true purpose emerged. On 10 March, an MP, 83-year-old ex-cosmonaut Valentina Tereshkova, proposed the so-called “zeroing” of presidential terms. This meant resetting presidential term limits to zero. Nobody opposed the proposal and it was included in the proposed constitutional changes. Now Putin can stay in power for two more six-year terms.

It is the second time that Putin has extended his term in power. He was elected president of the Russian Federation 20 years ago, in 2000. At that stage, the presidential term was four years, and the restriction in the constitution was to two consecutive terms. After serving two terms, trusted Prime Minister Dmitry Medvedev was elected as the placeholder president until 2012, when Putin was re-elected as president. In December 2008, the presidential term in Russia was extended from four to six years. In 2024, Putin will come to the end of his second six-year term if the constitution is not amended.

Contrary to reducing presidential powers, the amendments to the constitution have increased them. Now the president can nominate the general prosecutor and his deputies, heads of regional prosecutors and has the power to initiate the resignation of judges. The president also has the power to initiate appointments for the Constitutional Court with the approval of Russia’s upper house of parliament (the Council of the Federation). Thirty out of 170 members of the Council of Federation would be appointed directly by the president.

Furthermore, to be completely safe after 2036, the new amendments to the constitution guarantees immunity to the president emeritus (Article 92).

Why did Putin need the ‘referendum’?

This change to the constitution could have been voted on in parliament, where Putin has the required support. However, Putin decided to demonstrate to the West the extent of his political power base and how well supported it is by the people. The approval of the West is important as Russia’s economy is suffering from the sanctions implemented by the West after the Russian annexation of Crimea. Russia is also seeking to rejoin the G8, from which it was excluded after the annexation of Crimea in 2014. 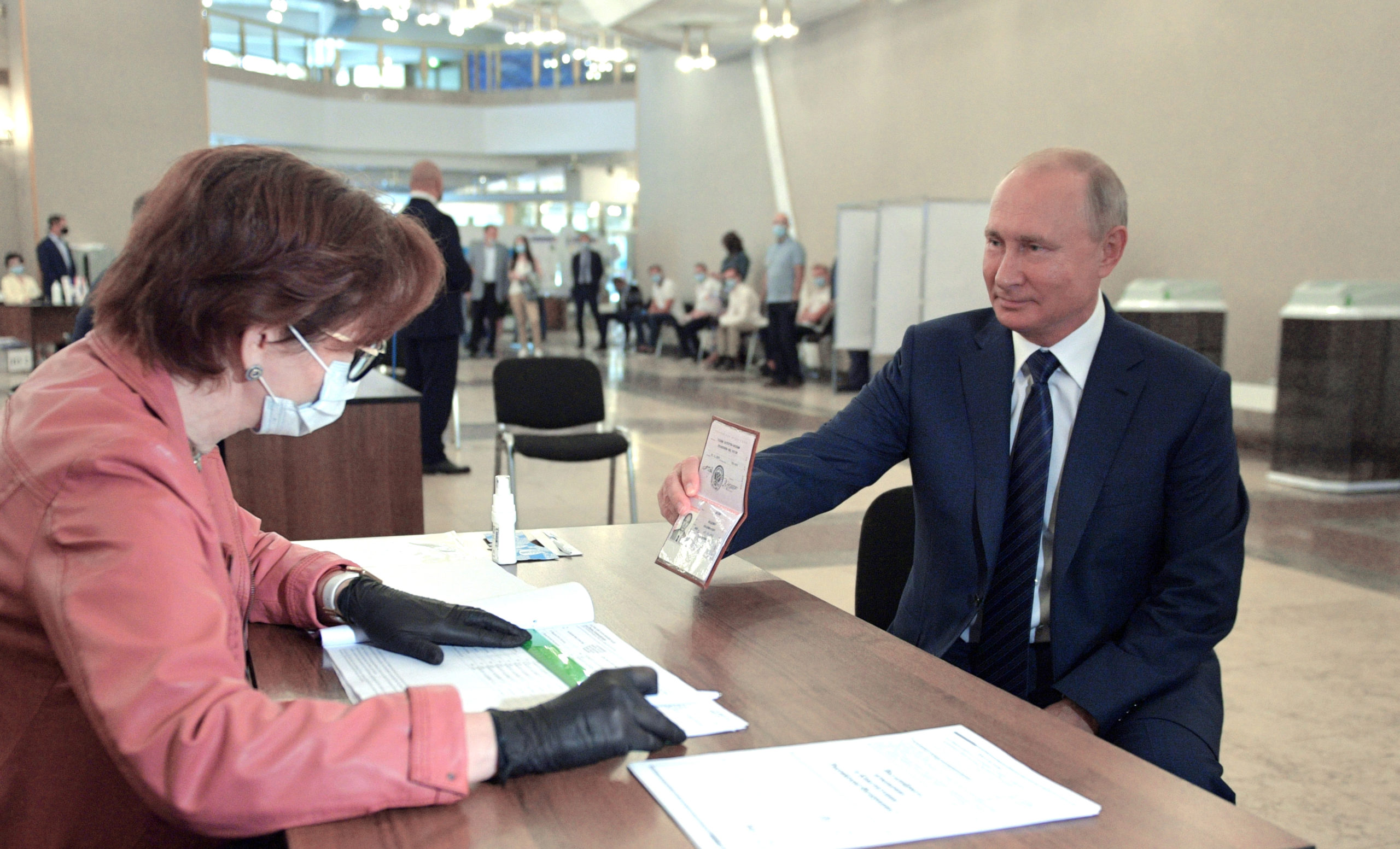 Putin shows his passport while taking part in a nationwide vote on amendments to the Russian constitution during the main day of vote at a polling station in Moscow, Russia, 1 July 2020. (Photo: EPA-EFE / Alexei Druzhinin / Sputnik / Kremlin Pool)

Moreover, recently Putin’s support had dropped to its lowest ever – 59% in April. Previously, when Putin’s rating went down to 60%, he annexed Crimea, and the rating spiked to 88%. Without a referendum, Western powers might also have questioned the unprecedented speed of approval by the Constitutional Court of the amendments. In just two days, the court produced 52 pages of conclusions supporting the amendments without allowing any comments or suggestions by legal experts. The Constitutional Court in Russia has worked faster only once – in 2014 it produced overnight, from 18-19 March, the approved annexation of Crimea.

Second, there were only two options to “vote” for: “yes” or “no”. Thus people had to vote for all changes or not – and these changes included popular demands for changes to national insurance, to the clause that “honours the memory of the defenders of the Fatherland, and protects the historical truth”, plus – of course – the extension of Putin’s absolute powers.

Third, the voting happened during the Covid-19 pandemic and Russia holds third global place when it comes to coronavirus infections – 600,000 cases. Thus Moscow and St Petersburg were voting electronically, ID documents of voters were not documented, and the voting at home did not allow for observers. Covid-19 was the reason given to deny the right of the opposition to protest due to the ban on gatherings.

Why was there no opposition?

The new amendment to the constitution requires that the new president has to have lived in Russia for 25 years and would never live abroad. With this simple adjustment, Putin is cutting off the potential opposition leaders Oleksii Navalny and Mikhail Khodorkovsky. 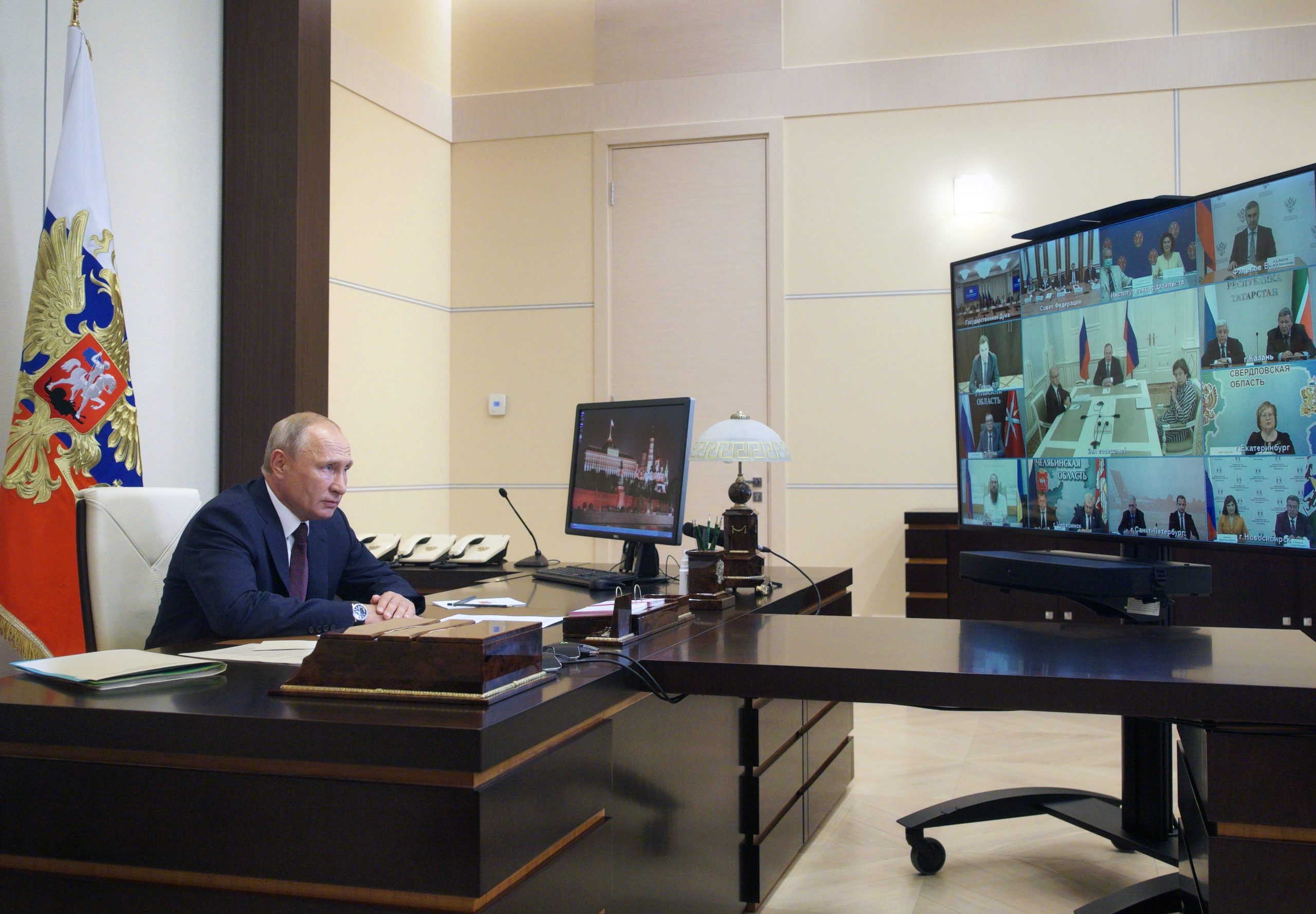 There is a good reason why there is no opposition in Russia. Among the best-known cases: in 2009, Sergei Magnitsky, a Russian tax accountant, revealed a fraud scheme that implicated Putin’s administration in stealing public money via tax returns. Shortly after that, Magnitsky was arrested and died in prison.

Three years before Magnitsky, Anna Politkovskaya published a number of investigations into Putin’s war in Chechnya, arguing that Russia was a police state or mafia state under the leadership of Vladimir Putin. After extensive intimidation and violations of her rights, she was shot dead in the elevator of her house. In February 2015, the leader of the opposition, Boris Nemtsov, was shot dead not far from the Kremlin.

The current leader of the opposition, Oleksii Navalny, has not been registered as a candidate for the presidential election based on a Russian court case that, according to the European Court of Human Rights, denied Navalny’s right to a fair trial. Navalny regularly spends time in Russian prisons for organising peaceful protests.

What South Africa needs to understand about Putin’s constitutional changes 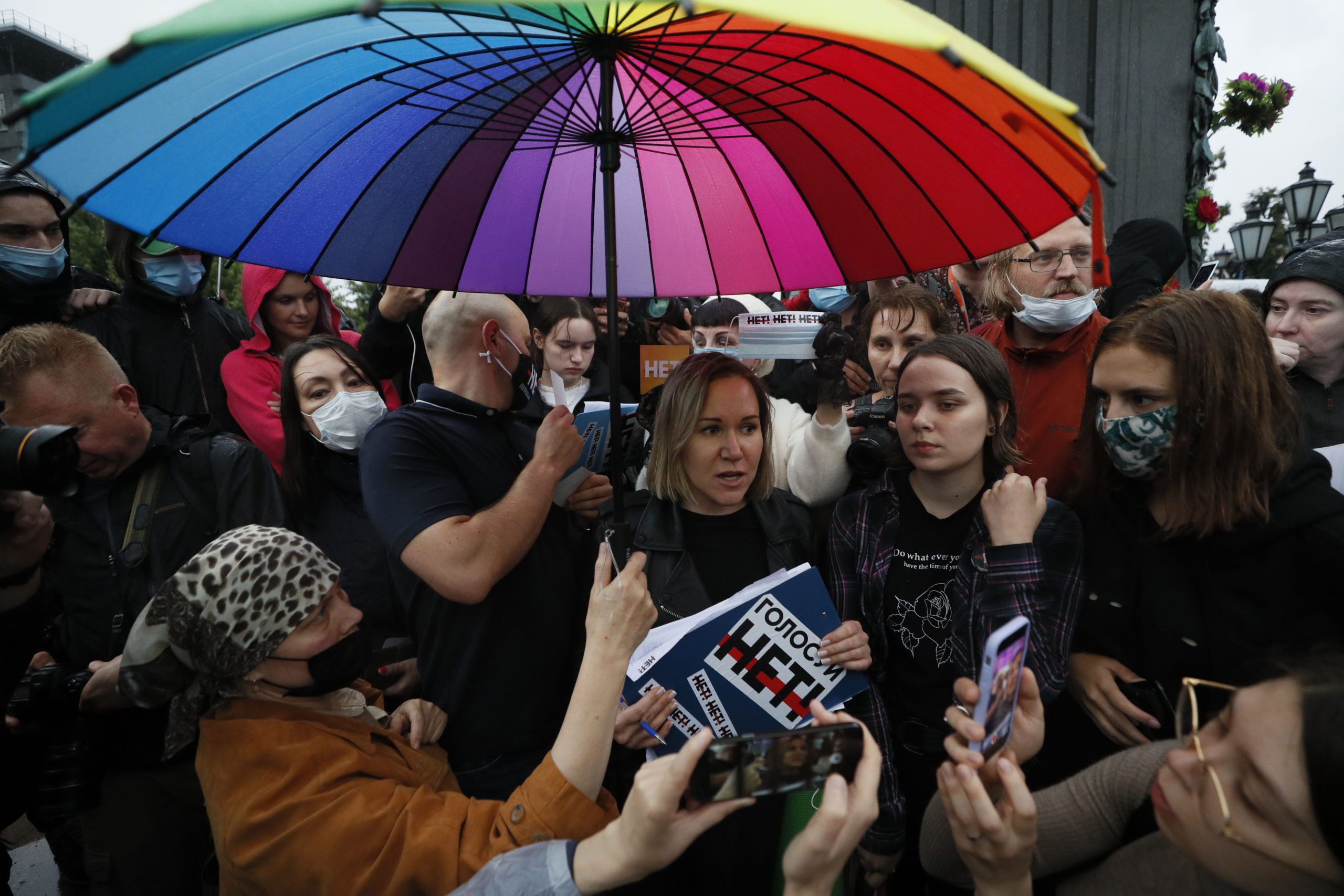 People crowd while collecting signatures in the Pushkinskaya Square in Moscow for a collective lawsuit to demand the cancellation of the results of the vote on amendments to the Russian constitution, 15 July 2020. (Photo: EPA-EFE / Yuri Kochetkov)

Russia is steadily becoming a nation where human rights mean less and less. The new constitution removes gay marriage rights, for example, by defining marriage as exclusively a union between a man and a woman (Article 71).

By including the clause, “Diminishing the significance of the feat of the people in the defence of the Fatherland is not allowed”, the new constitution will also effectively enable the criminalisation of historical research into Stalin’s repressive methods, the agreements between Russia and Germany during the Second World War, and any other atrocities in the recent past or future that Putin may deem a threat to “defence of the Fatherland”.

The current global crisis – like the crisis triggered by the First World War over a century ago – is reinforcing a new form of populist authoritarianism across many world regions. It is legitimated by a toxic cocktail of appeals to nationalistic patriotism, security of the nation, the need for a strong leader, a rendition of history as betrayal, implicit and/or explicit racism, homophobia, and climate change denialism.

The Russian case is part of an advance guard that is seeking to roll back the rising tide of mass democratic opposition to the dystopian world that the Putins of this planet are systematically putting in place. DM

Dzvinka Kachur is with the Centre for Complex Systems in Transition (CST), Stellenbosch University.

Zidane on Jovic's future: anything can happen. I can't say anything until the window closes
Flick on Bayern's Interest in Kramaric: I know him well, but I haven't heard anything about it
We have three clubs in this group stage of the Champions League. How did campaigns with two end up?
Solskjaer on transfers: No news. Working with what we have, Manchester United have a big squad
Guardiola confirmed that Zinchenko will stay at Manchester City
Bayern won 5 trophies in a year. To repeat the record Barca need to take another
Flick took 5 trophies with Bayern after 40 matches
Source https://www.dailymaverick.co.za/article/2020-08-05-russian-constitutional-change-entrenches-putins-rule-heralds-a-dystopian-future/

OPINIONISTA: As xenophobia spreads and crime spirals, where are the South African intelligence agencies?

OPINIONISTA: Ethics and the public servant: Moving towards a corruption-free service

OPINIONISTA: Ingonyama Trust’s stance on women accessing its land is an insult and perpetuates colonialism

OPINIONISTA: Criminal justice system not the only option for survivors of gender-based violence

BUSINESS MAVERICK OPINIONISTA: The Covid-climate nexus and the quest for a win-win-win solution

GIVE ME TICKET FOR AN AEROPLANE: Defence minister bills ANC R105,000 for controversial flight to Harare

AGE OF THE ASSASSIN: Slain detective Charl Kinnear was on the trail of ‘Gauteng mafia’

Book Excerpt: The politics of business: It’s a matter of conscience

Verve Scooters Founders Press On Despite Pandemic And Politics

Society’s most vulnerable hit the hardest by lockdown, says Capitec

ISS TODAY: Third terms for presidents of Côte d’Ivoire and Guinea must be stopped

‘We must maintain our commitment to environmental conservation’ – Ramaphosa addresses UN

‘We must maintain commitment to environmental conservation’ – Ramaphosa tells UN

World's first man to be cured of HIV dies of cancer

Mnuchin and Pelosi in last-ditch talks on stimulus compromise

Newsdeck: Nearly half of Argentina in poverty as pandemic deepens crisis, researchers say

News24.com | Burned out by coronavirus, millions of US women want to quit work

News24.com | Mkhwebane on Vrede Dairy Farm matter: Investigation is complete, but report must be wrapped up

Transformation in sport must start at the bottom: Ashwell Prince

Newsdeck: Next Trump-Biden debate will have new rules to aid ‘orderly discussion’

Is a bacteria killing elephants in Zimbabwe and Botswana?

PETER BRUCE: Get set to steel ourselves for more pain

Options To Keep Your Equity: 6 Startup And E-Commerce Financing Alternatives To Venture Capital

Humans of Covid-19: Free State doctor: ‘This pandemic has changed everything’

News24.com | SA's trade surplus widens, but it could be thwarted by renewed lockdown restrictions

Here's what you need to know about international travel under lockdown