PATH OF DESTRUCTION: Calculating the losses of Cape Town’s three days of Hell

It is too early to accurately predict what the total cost of the Rhodes Memorial fire will be — and some of the losses are simply incalculable. But it’s already clear that the bill will be enormous, in multiple ways.

The University of Cape Town (UCT) is without doubt the greatest victim of the Rhodes Memorial fire, though all staff and students escaped without harm.

Western Cape government spokesperson James-Brent Styan said on Tuesday that six buildings on the UCT campus were either damaged or destroyed — in addition to the Jagger Reading Room, which is classified as a heritage building. 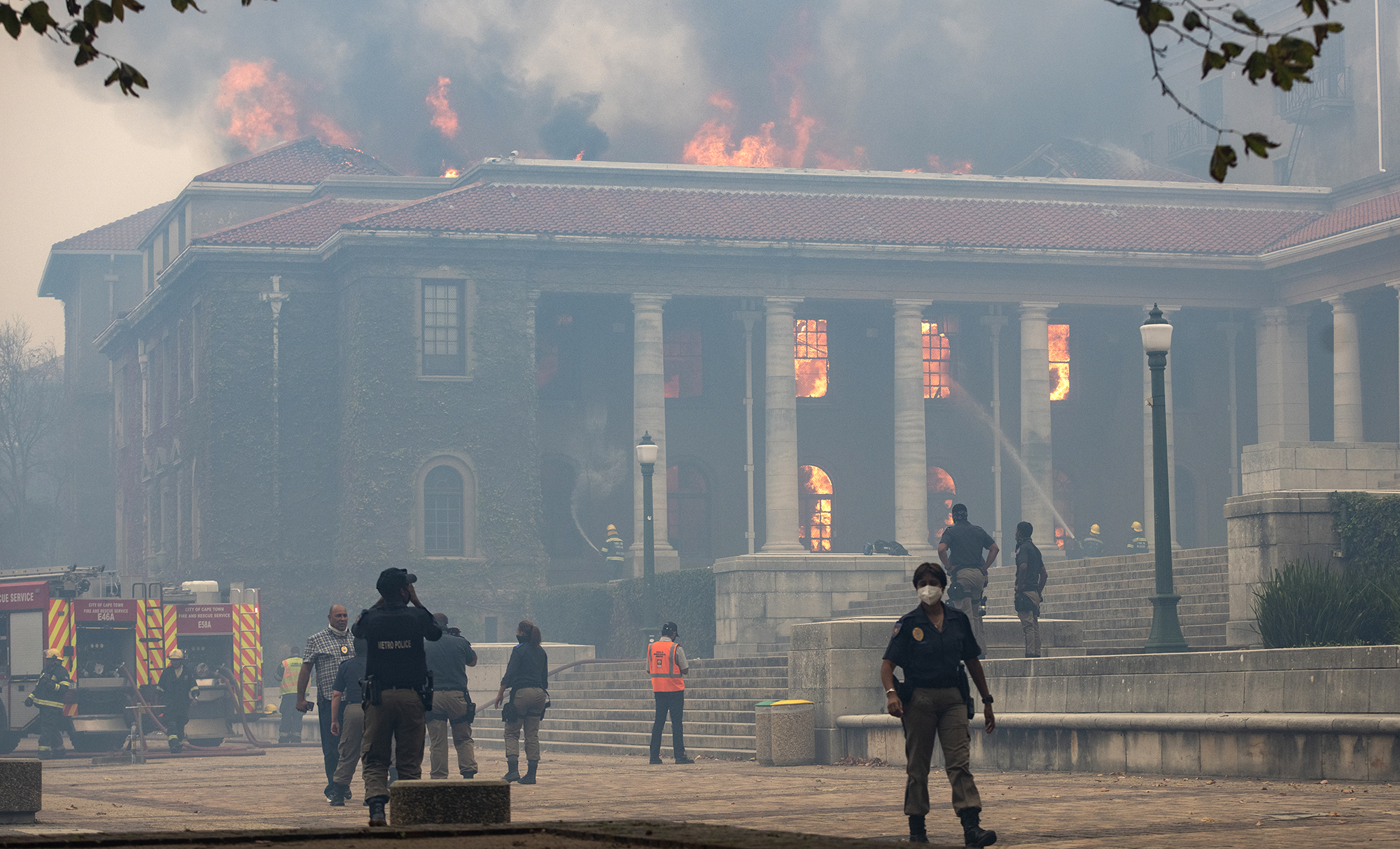 Professor Sue Harrison, the university’s deputy vice-chancellor for research, described the loss of the Jagger Reading Room as “our major tragedy”, adding that some of the special collections have been lost. There is yet to be clarity on the archival losses, with some academics urging optimism due to fireproofing measures installed under the leadership of former vice-chancellor Dr Max Price.

UCT spokesperson Elijah Moholola told Daily Maverick there was as yet no official confirmation of all the buildings affected, but he confirmed that the list includes the Smuts Hall residence, Fuller Hall residence and the HW Pearson Building.

Christelle Colman, spokesperson for Old Mutual Insure, told SAFM that “most of the big South African universities form part of a specific risk and insurance fund for the tertiary education institutions”, with insurance companies sharing in that risk. As such, Colman said that most insurance firms would be affected.

Colman said that one figure being bandied about with regard to the UCT fire was R1-billion.

Vice-Chancellor Mamokgethi Phakeng told eNCA the damage was estimated at more than R500-million — excluding the loss of priceless books and documents.

Students who have already faced disrupted teaching and learning from the Covid-19 pandemic also kissed goodbye to a week of the academic programme, with classes only resuming on Monday, 26 April.

As of Tuesday evening, six firefighters had been confirmed as sustaining injuries.

Styan reported on behalf of the Western Cape government that nine civilians had been taken to hospital with breathing difficulties.

Four thousand students had to be evacuated from UCT, some of whom reportedly lost all their possessions in the fire.

An unknown number of residents of an informal settlement next to Walmer Estate also lost their structures and belongings. 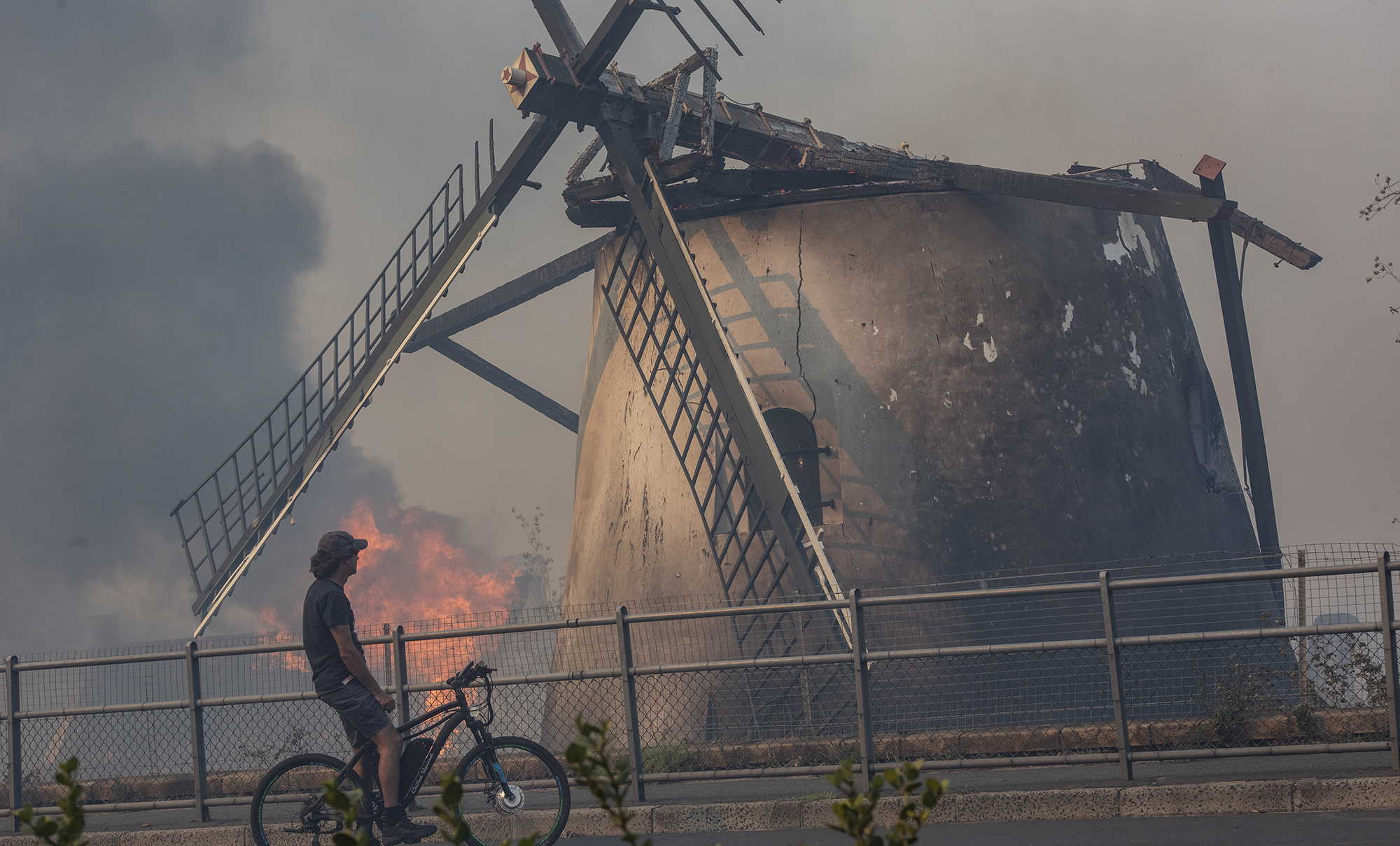 In addition to the loss of the magnificent Jagger Reading Room, built in the 1930s, the country’s oldest working windmill was also badly damaged. Mostert’s Mill, built in 1796, was restored in 1995 by the Department of Public Works, but the current damage may put it beyond repair. The South African Heritage Resources Agency did not respond to a request for comment on Tuesday.

There has reportedly been no damage to the Herbert Baker-designed Rhodes Memorial monument, bar some scorching. A group calling itself Friends of Rhodes Memorial has vowed to embark on a clean-up as soon as is permissible.

The City of Cape Town has counted “two buildings in the Rosebank area” — without giving further details — as being damaged or destroyed.

Both the Rhodes Memorial restaurant and its adjoining chapel were destroyed.

The government reported that an unoccupied ministerial residence owned by the Department of Public Works in Newlands had been “completely destroyed”, with SABC News stating that the home was that of Labour Minister Thulas Nxesi.

South African National Parks (SANParks) has stated that more than 600ha of land has been burnt. SANParks spokesperson Rey Thakhuli told Daily Maverick that the extent of the damage was still to be assessed.

In addition to fire debris that needs to be cleared up, some city infrastructure sustained damage in the fire. The City of Cape Town said that repairs need to be undertaken to some roads and overhead electricity lines.

Styan told Daily Maverick that 150 firefighters from the city were deployed per shift.

In addition, there was a large deployment from Working on Fire. Spokesperson Linton Rensburg told Daily Maverick that Working on Fire resources at the blaze included 116 firefighters, eight management staff, two fire trucks and four helicopters.

“Unfortunately it is too early to give an approximate number on cost and this will most probably only be calculated towards the end of this ongoing operation,” Rensburg said. DM