Firefighters who have been fighting the blaze on Table Mountain collect food packages and medical parcels at a public donations drive, at Roeland Street Fire Station in Cape Town on Tuesday, 20 April. (Photo: Victoria O’Regan)

The Table Mountain fire ignited a large-scale relief effort by Capetonians, who united to support firefighters battling the blaze. Large corporations, local organisations and residents have come together to coordinate donations, volunteer as firefighters and assist with evacuations.

The Roeland Street fire station has been a hotspot for public donations since the huge fire that began on the slopes of Cape Town’s Table Mountain on Sunday.

A request for donations to be dropped off at the station was first made on Sunday morning and was posted on Ward 77 councillor Brandon Golding’s Facebook page. 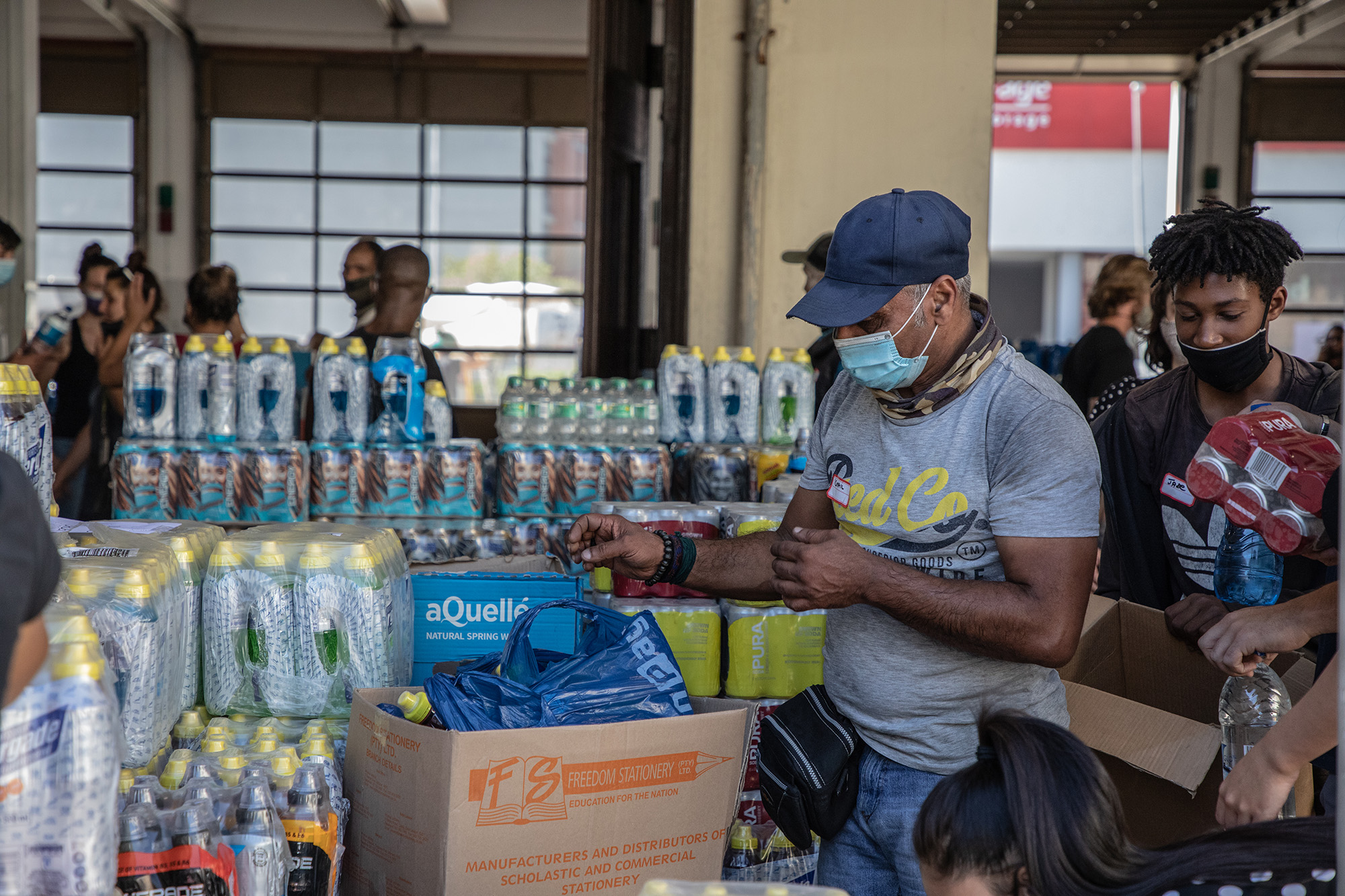 Volunteers organise and package food parcels for firefighters and those affected by the Table Mountain fire, at Roeland Street Fire Station on 20 April 2021. (Photo: Victoria O’Regan) 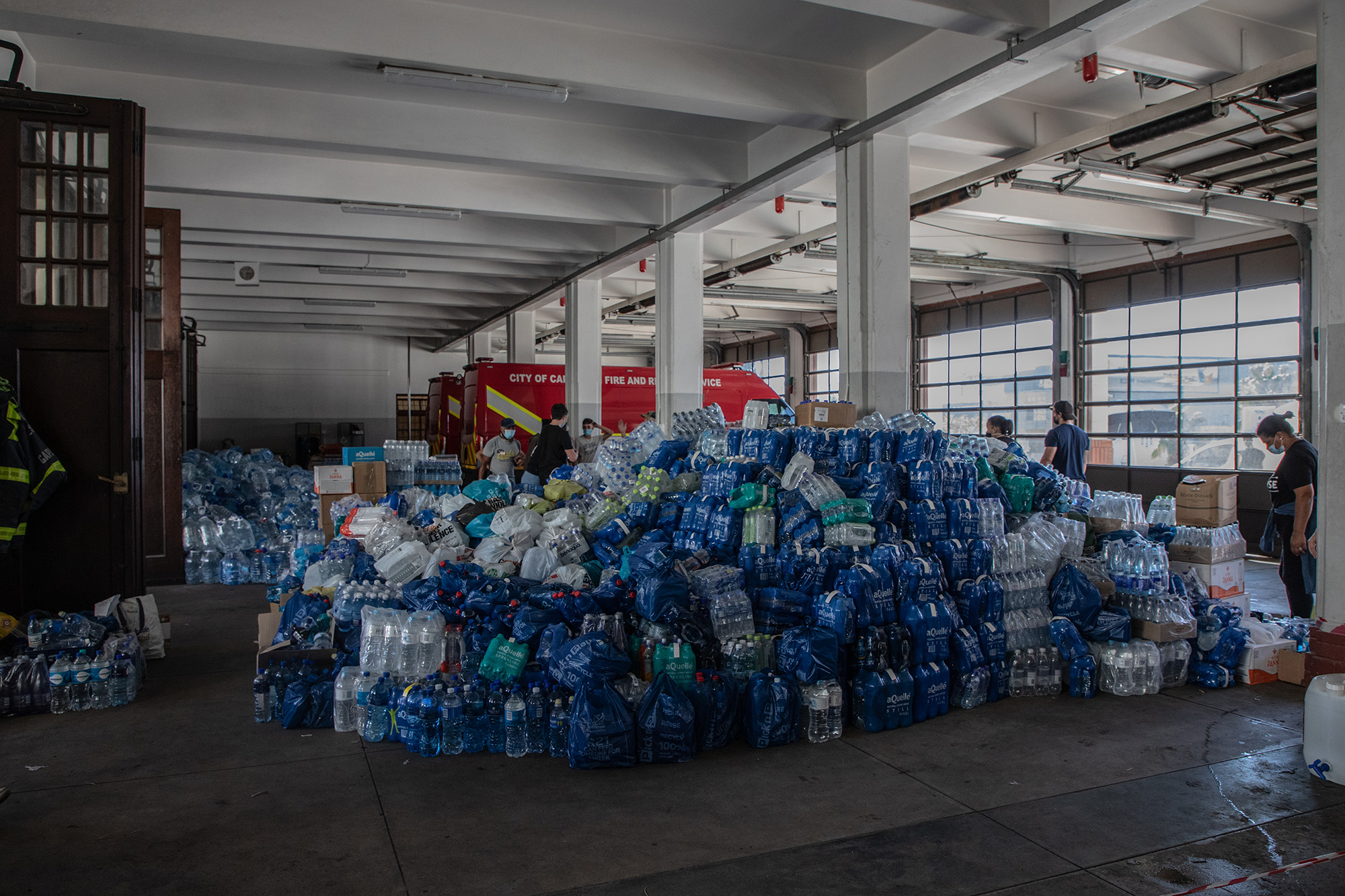 On Monday, volunteers received and organised public donations for 17 hours, and packed more than 5,000 food bags for the firefighters working on the frontlines. 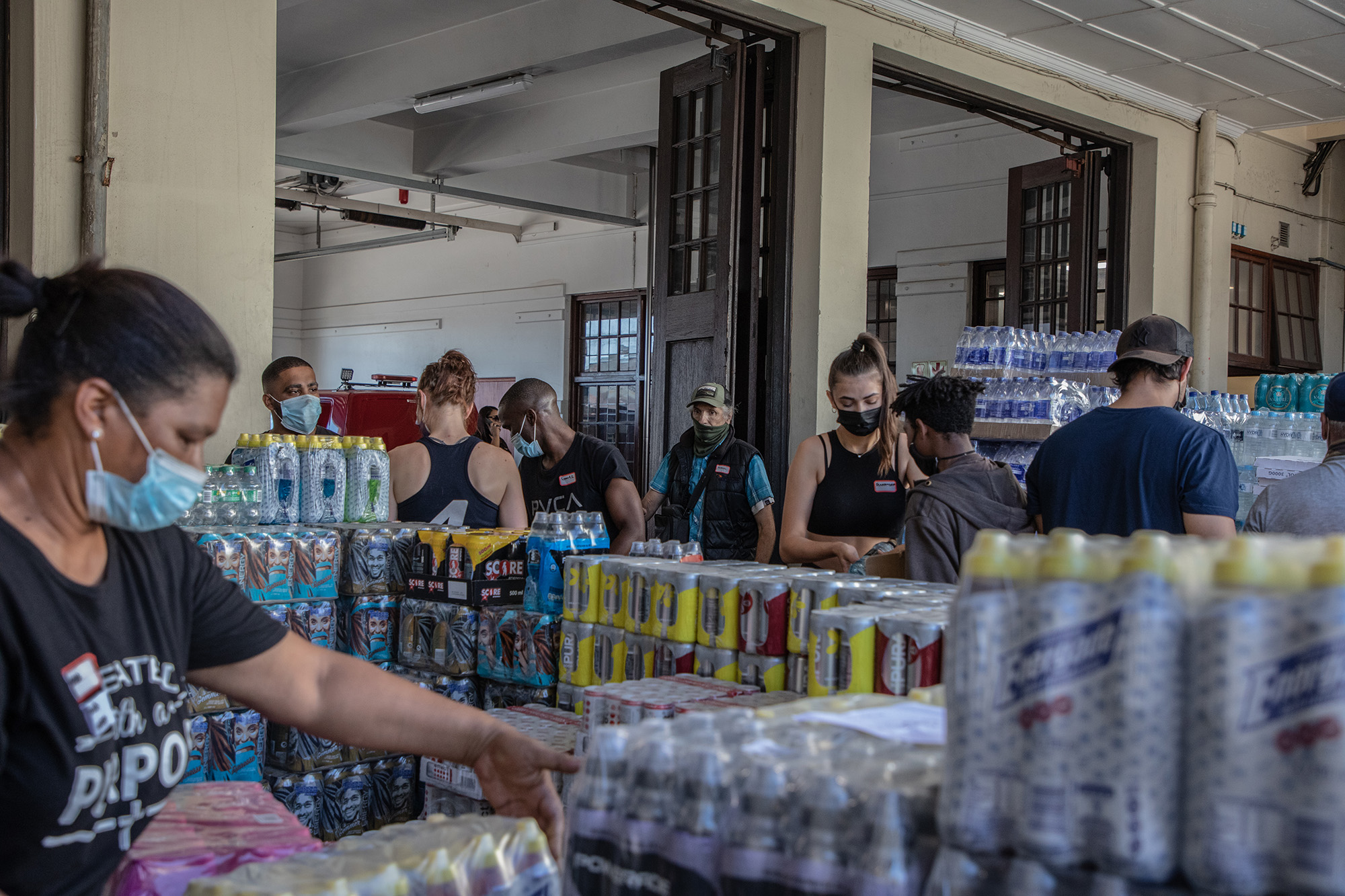 Volunteers make a chain as they pass bottled water to one another to be packaged for the firefighters on Table Mountain, at Roeland Street Fire Station on 20 April 2021. (Photo: Victoria O’Regan)

“The support has been overwhelming,” Dudgeon said.

“We provide two hot meals per day [and] we make sure that everything is halaal so that nothing needs to be separated,” said Dudgeon.

Gift of the Givers

The nonprofit organisation Gift of the Givers has delivered food to about 4,000 UCT students who were affected by the fire.

On Monday, the organisation appealed for public donations as it delivered meals to students housed at the Groote Schuur residences.

Volunteer Wildfire Service (VWS), a non-profit volunteer organisation with more than 200 volunteers at fire stations in Newlands, Jonkershoek, the South Peninsula and Grabouw, has been collecting donations for VWS firefighters battling the blaze.

Andrew Reaper, a masters student at UCT who has been volunteering for VWS since 2019, joined the battle to help contain the wildfire on Monday morning.

This was Reaper’s first time fighting a fire on Table Mountain. The devastation the fire had at UCT on Sunday had hit “close to home”, and Reaper said he felt he had to do something.

“I definitely felt like I needed to be there,” Reaper told Daily Maverick. 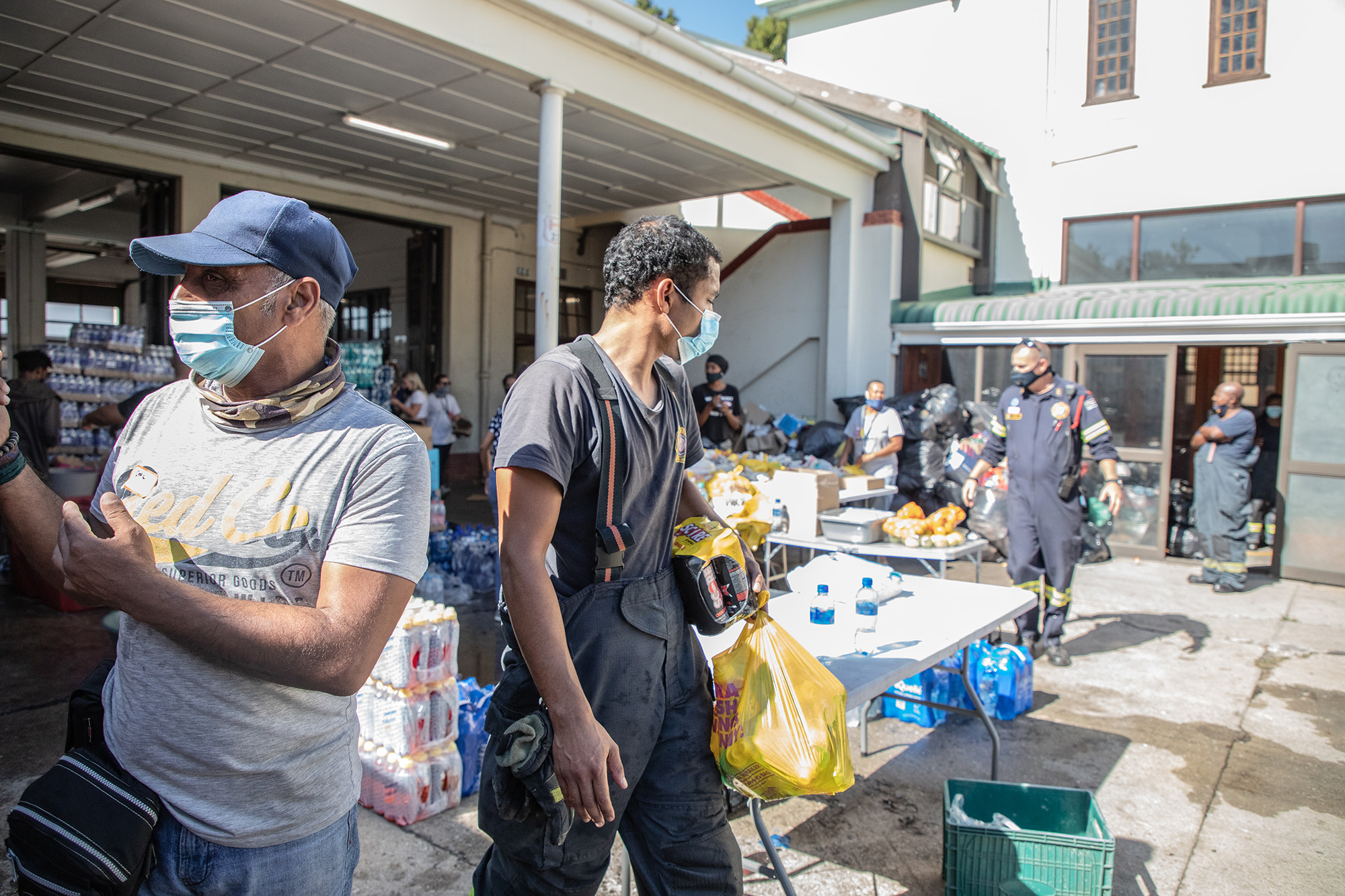 Firefighters who have been fighting the blaze on Table Mountain collect food packages and medical parcels at a public donations drive, at Roeland Street Fire Station in Cape Town on Tuesday, 20 April 2021. (Photo: Victoria O’Regan)

Reaper, along with other VWS firefighters, was first stationed above Philip Kgosana Drive and was later redeployed to Deer Park in Vredehoek, as the fire swept across Table Mountain on Monday.

“We were deployed at 9am and then we got back to base at eight at night,” said Reaper. “So we spent 11 hours on the line yesterday.”

Reaper said the VWS volunteers had begun with “structural protection” of houses in the area, which made it clear to him that the situation was already “pretty bad”.

“It’s difficult not to get emotional when you are protecting someone’s home,” he said.

“How everyone’s come together in one way or another – whether you’re on the frontline, or donating or volunteering in any sphere – is really impressive,” added Reaper.

One reason behind Reaper’s decision to volunteer as a firefighter was to help save wildlife, he said.

While pausing for a quick lunch break in between firefighting, Reaper watched as “a porcupine bolted down the mountain”, fleeing the blaze.

In coordination with Absolute Pets, the Cape of Good Hope SPCA collected donations of “dressings, bandages, Silbecor ointment, cool packs, fresh fruit and vegetables for the animals and supplies like energy drinks, energy bars and eyedrops for the team in the field”.

The SPCA, People’s Dispensary for Sick Animals and Frits Dog Hotel also offered emergency accommodation for pets, if their owners were forced to evacuate from their homes.

[SAFE HAVEN] The SPCA, PDSA and Frits Dog Hotel has opened our doors to assist people evacuating their animals free of charge. Details in the link below https://t.co/PzKoLycXd7

To help care for wildlife affected by the fire, the Cape of Good Hope SPCA also called on the public who reside in affected areas to:

For more information, visit the organisation’s How to Help page. DM