Gloria Gqabaza from Orange Grove shows what is inside her fridge. (Photo: Michelle Banda)

Residents of Orange Grove and Vrededorp in Johannesburg say hunger is a way of life, but that Social Development overlooks their struggle and dismisses them as too well-off for social relief.

Poverty and hunger are always on display in townships and shack settlements, but these hardships are hidden behind the walls of South Africa’s suburbs. 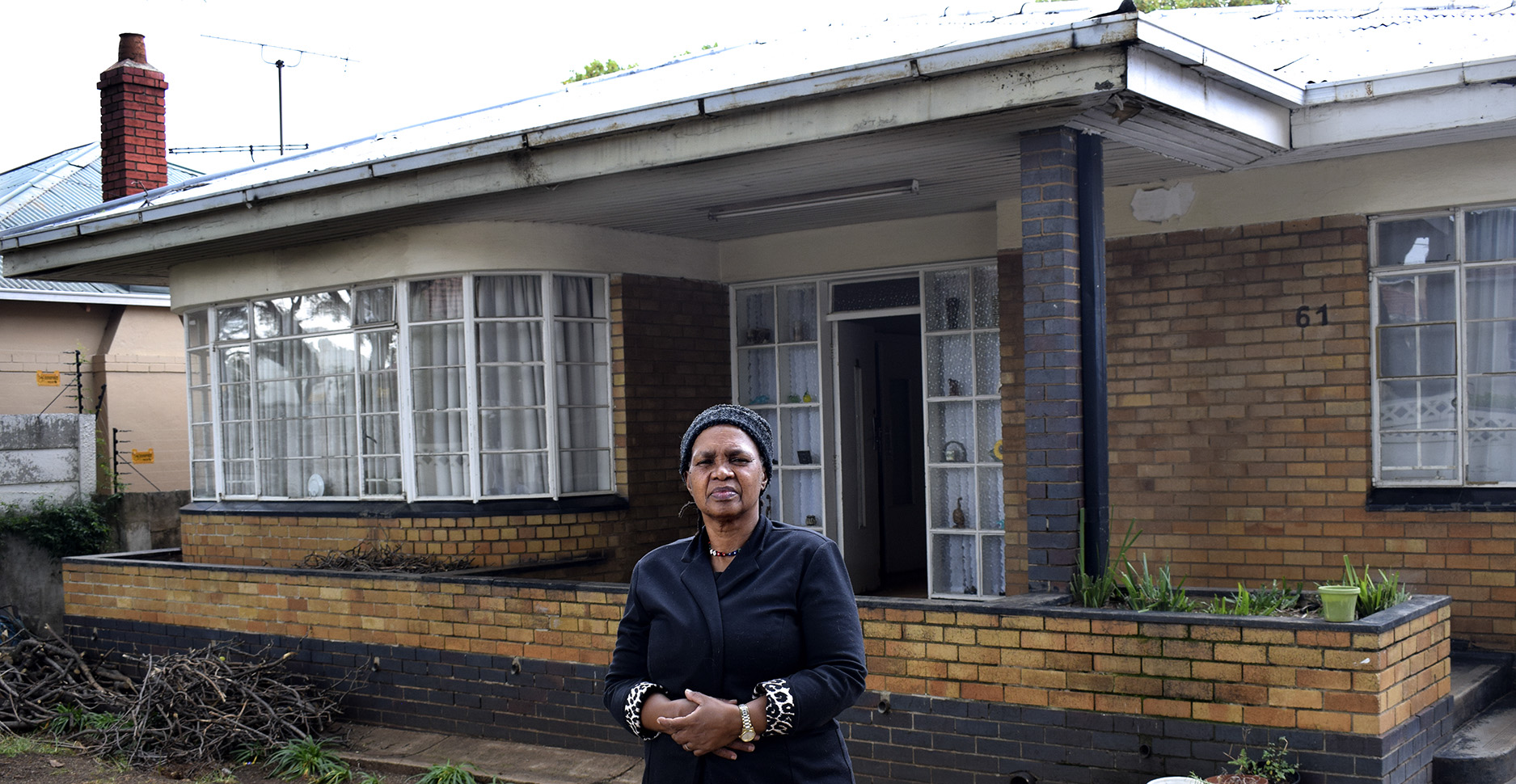 The Gqabaza family — 67-year-old Gloria, her two children, 32 and 40, and a nine-year-old grandson — is one of many battling hunger in Orange Grove, where they have been living since 2009. Affording the basics has been an ongoing problem since they are unemployed — but faith keeps them going. Proactive Gloria sells Tupperware products to help put food on the table. She says the pandemic has severely affected her hustle, leaving them hungry and without the means to feed themselves.

“Covid knocked us down. I don’t know what I will eat tonight or tomorrow. I live by faith that something will come up. All I do daily is put my clean pots on the stove and anyone who comes into my kitchen will assume I’m cooking and the food is not ready. 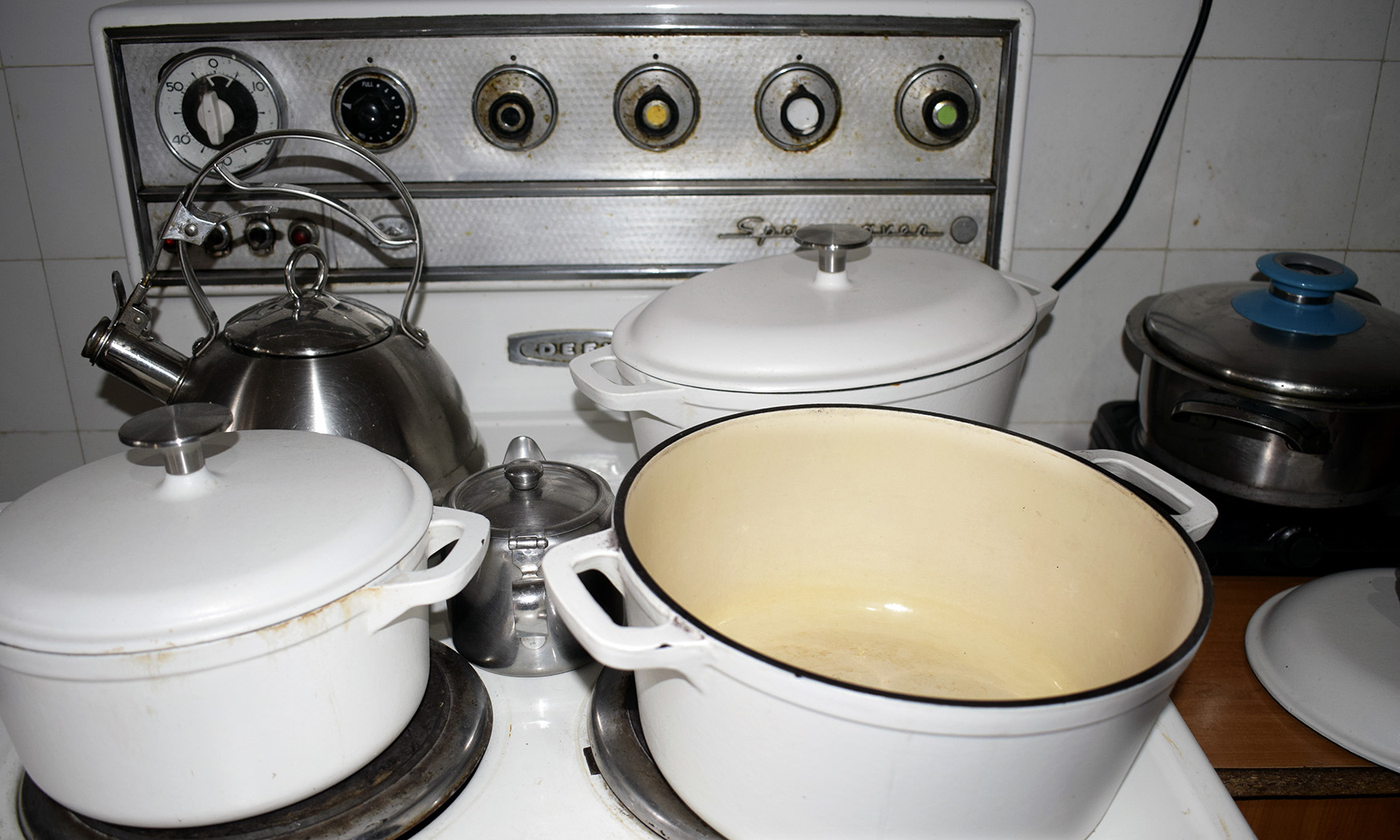 Empty pots on the stove in the Gqabaza home in Orange Grove. (Photo: Michelle Banda)

“I was raised in a township, Soweto, where I could easily reach out to any community member for food. But since I moved to a suburb that is not a community it is very alienating because I can’t just go to the neighbours and ask for anything even when I’m too desperate. I am an old woman and a mother; automatically the responsibility of fending and trying to get food lies on me. Luckily we also benefit from food-hamper groceries from the Norwood, Orange Grove and Houghton (NOAH) Community Action Network biweekly to sustain us for a couple of days.”

Lina and Mannie Cabeleira, who own The Radium Beerhall, one of the oldest pubs in Orange Grove, said the pandemic affected their business and they do not eat as they used to.

“The bar stands ready and waiting but with little to no business, yet there are many mouths dependent on it, including us. We have had to eat from the pub and allow staff to eat here as well… just to relieve the hunger burden,” said Lina.

Vrededorp, Johannesburg residents Olive and Nico Hattingh are one of many beneficiaries of the Pickle Foundation soup kitchen. (Photo: Michelle Banda)

Pensioners Olive and Nico Hattingh (63), who live in Vrededorp as part of a family of 10, said they applied for food parcels through the Department of Social Development about a year ago, but have not received any food, nor communication about their application. They said they survive on their pension of R1,890 each as well as a soup kitchen run by the Pickle Foundation, which offers chicken biryani from Monday to Friday.

“A 10kg bag of maize meal and 7kg of potatoes is the only food we have in the house meant to feed our big family,” said Olive. 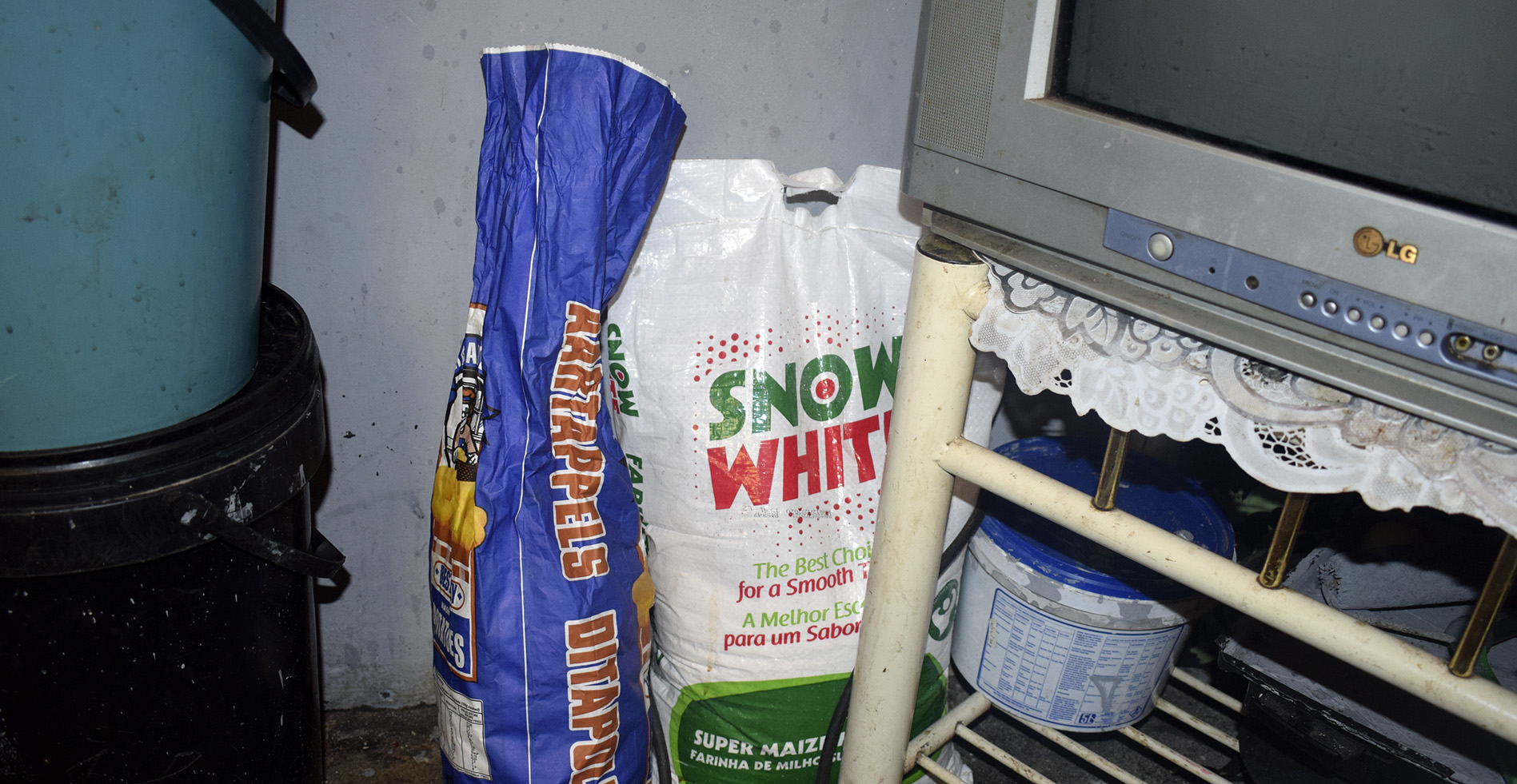 The only food in the Hattingh home in Vrededorp — 10kg of maize meal and 7kg of potatoes. (Photo: Michelle Banda)

“As old and frail as we look, we sometimes go door to door begging in Greenside and Parkhurst, which are a distance from here but we do it either way so that our seven-year-old grandson has something to eat. It breaks our hearts trying to explain to a boy his age why we don’t have food or eat in a cautious way that seeks to avoid potential risks of not having anything to eat,” said Nico.

A 49-year-old visually impaired woman from Vrededop said it is even harder to ask for food assistance from family or neighbours if you have more than five mouths to feed.

The woman, who did not want to be named, said it was hard enough asking for food from neighbours and friends, but when there were more than five mouths to feed it felt “inappropriate”:

“My disability grant is never enough, but we try to make the most of it, although I still have to pay for the shack I rent at R550 and toiletries. Each month presents its challenges but I try so we have something to eat each day no matter how small it is, and advise my children to work hard at school so they can make something of themselves and hunger is the least of their worries.” 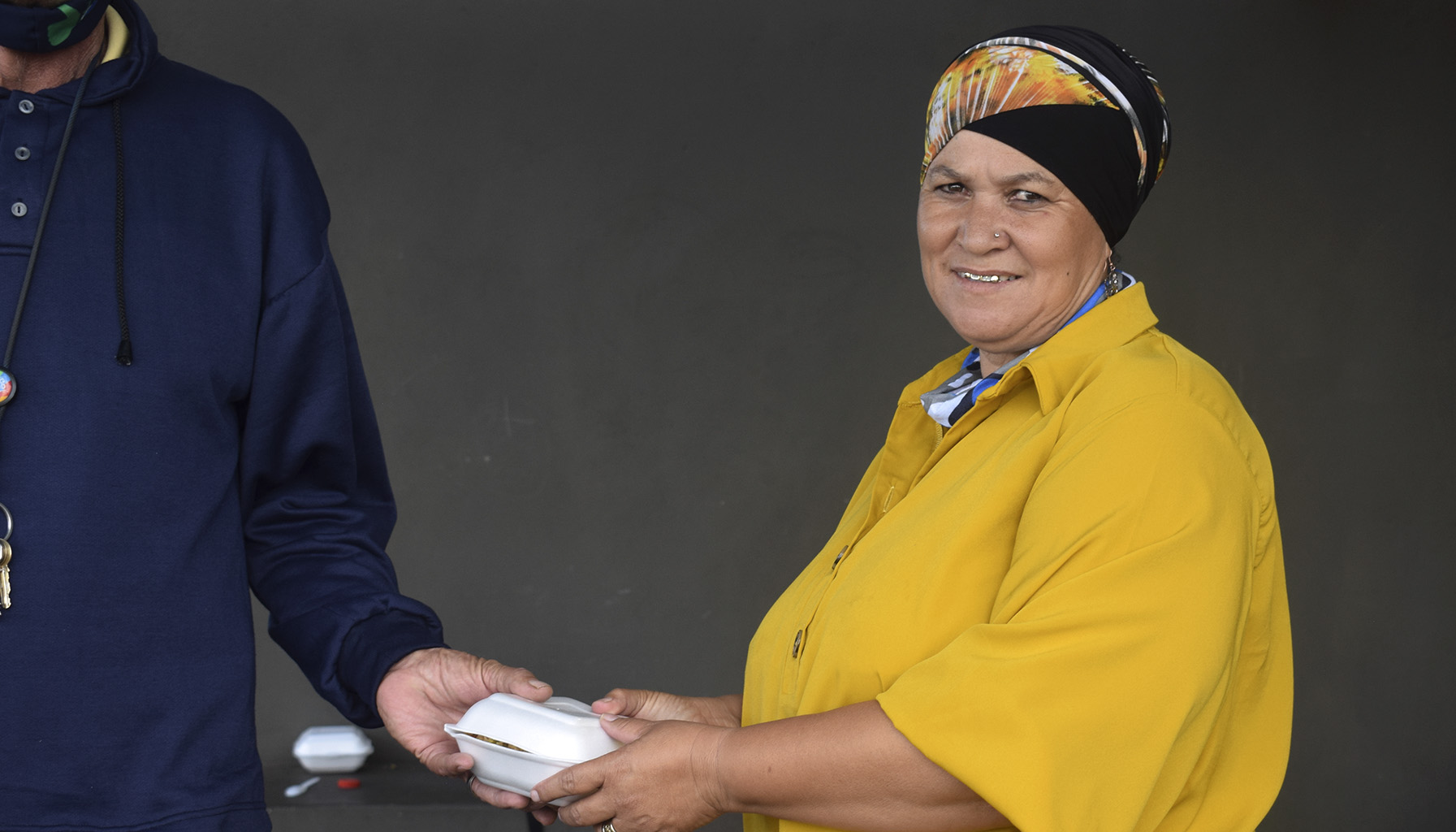 The Pickle Foundation, owned and run by Olah Minnaar, or Aunty Yola, is a lifeline for Vrededorp residents. She said she founded the organisation to feed as many mouths as she could every day because she understood the mental and physical anguish of not knowing what your next meal would be. 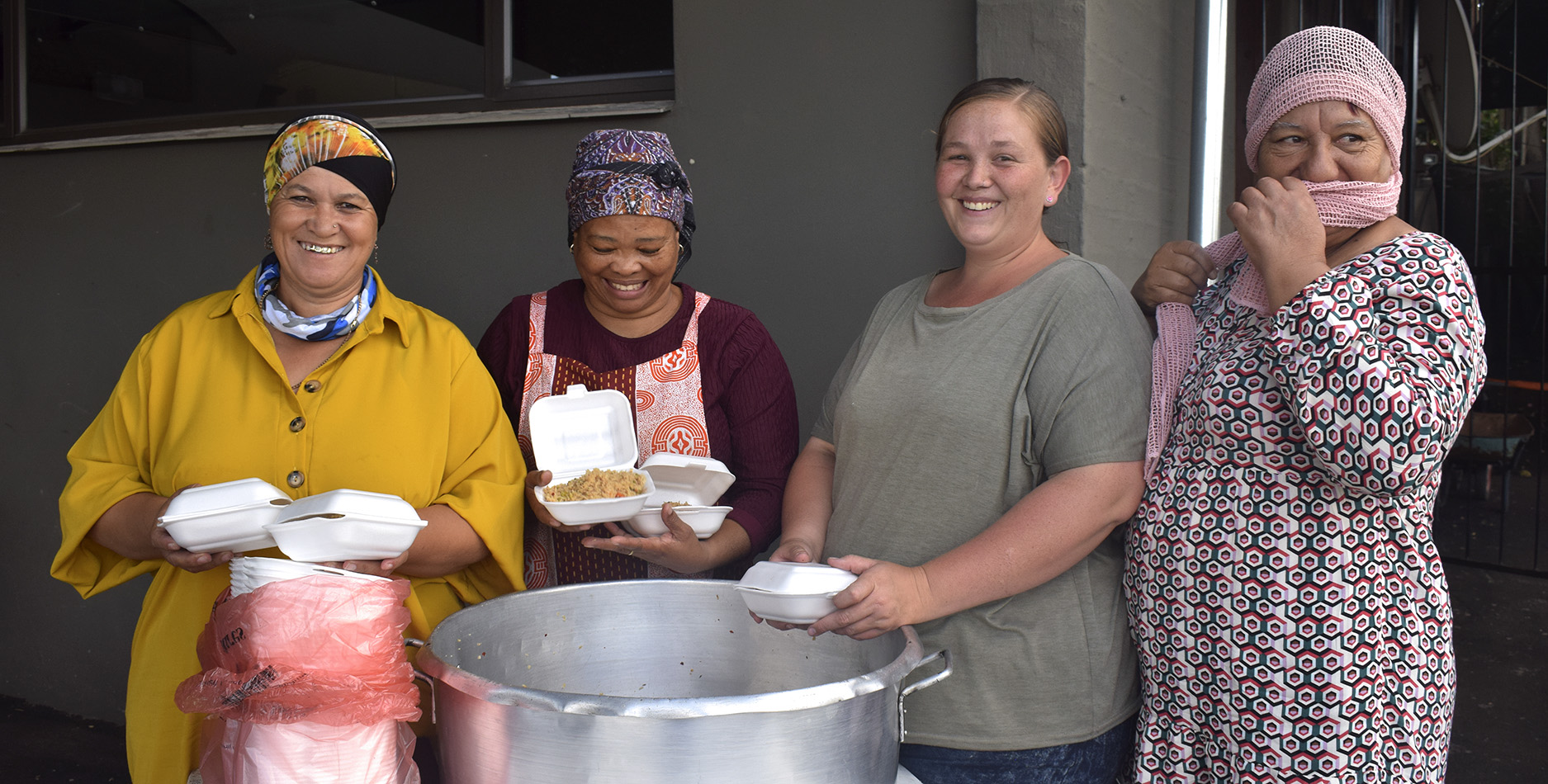 “I know how it feels to go on with your day without food. Growing up with three sisters and a single mother in a shack was hard enough and accessing food was a real struggle, so I can’t and won’t judge because I don’t know what happens behind closed doors. Given the numbers and different faces we meet and feed in the soup kitchen, I am certain of the great need for food relief in our area. Social Development has also come on board to give vegetables once a month, but vegetables only are never adequate, they need to complement (with) other foods”, said Minnaar.

Emily Wellman, a founder of the Norwood, Orange Grove and Houghton  (NOAH) CAN, said that through their food-relief programme they were also fighting the incorrect assumption that people in suburbs were less hungry or better off than their counterparts in places such as Diepsloot or Alex.

“The hunger we are working tirelessly to tackle is very real; it is only through the support of our neighbours and community who have donated to us that we have been able to do the incredible work we have so far. The work is not done and we continue to ask for support to feed and institute emergency food relief in the suburban areas in need,” she said.

Maverick Citizen made several efforts to reach the Department of Social Development for comment. At the time of publication, it had not responded. DM/MC