'Secrets of the Saqqara' (Image supplied)

Netflix has released a documentary on the recent discovery of the most perfectly preserved Egyptian tomb ever found. The mysteries currently being unearthed within it are both spooky and fascinating.

Secrets of the Saqqara Tomb

A window of light from above illuminates the kicked-up dust that floats in a narrow vault. A metallic scraping of a masked man’s mattock gives him pause – he’s found something. Buried in the dust is a tiny statue of the lion goddess Bastet, but why would such a statue be so deep within a tomb?

These are the opening moments of Secrets of the Saqqara Tomb – they simmer with subdued excitement, and unexplained mystique, the archaeologist’s drug of choice. It’s appropriate that this anticipation to unravel the mysteries of the past is a manifestation of the same human curiosity that will compel you to dig deeper into the film.

In November of 2018, a small team of local archaeologists hunting for tombs beneath the desert sands west of Cairo unearthed the discovery of a lifetime – the most perfectly preserved Egyptian tomb ever found – now known as the Tomb of Wahtye.

The walls were lined with relief sculptures and inscribed with hieroglyphics, the painted blue and ochre colours still boldly visible, undisturbed for 4,500 years. Secrets of the Saqqara Tomb documents the drama of the ongoing archaeological mission at this site and the significant discoveries thus far. 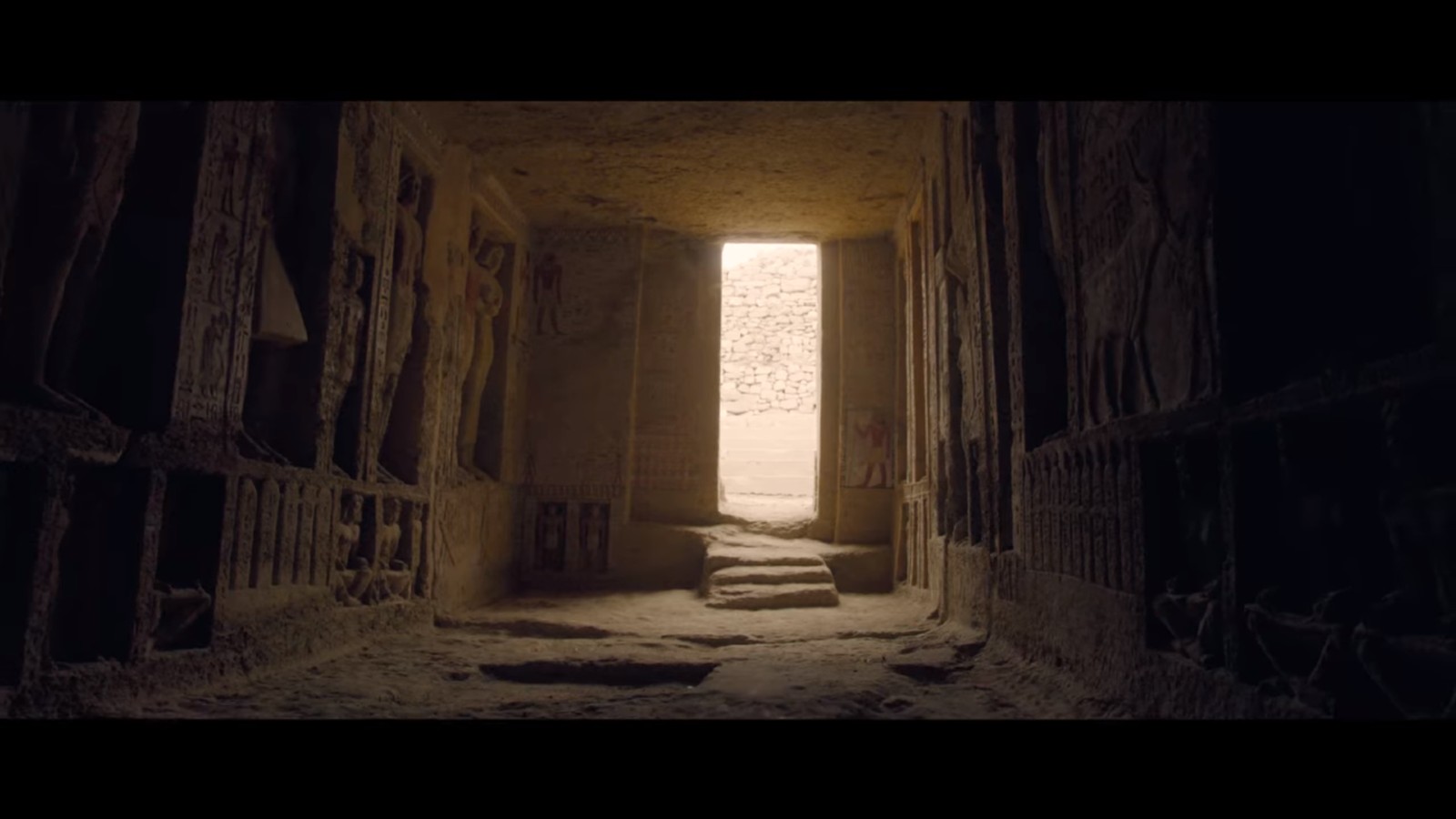 ‘Secrets of the Saqqara’ (Image supplied)

Picture Indiana Jones skulking about some ancient tropical temple. Through unknown feats of engineering, the booby traps built to protect the temple’s treasures are still functional after thousands of years! There is boundless knowledge about the civilisation that built them to be gained by studying their technology. Any self-respecting archaeologist would drool at the chance to study such ancient mechanical marvels, but not Indy, he’s far more interested in nabbing whatever shiny sacred object is being protected.

There are many people who follow in Indiana Jones’s footprints – looters. Despite having inspired an entire generation of archaeologists, Indiana Jones is essentially a thief. The true treasures to be found in the tomb are not objects but information, information which has since afforded new insight into ancient Egypt.

Real-life archaeology involves delicate, painstaking brushing of fragile objects (and not much evading of giant boulders and taking out baddies with a whip) but being the first person to hold a relic in your hands after millennia does involve its own kind of thrill.

The Tomb of Wahtye is located within the Bubasteion necropolis, an ancient Egyptian graveyard in Saqqara, in the shadow of the Step Pyramid, the oldest known pyramid in the world.

A nearby dusty road separates the living from the dead. On the one side, a crowded bustling city with lush green trees, on the other side an ancient graveyard and the vast desert plains. “People imagine the ancients living in the desert because that’s where they are now, but this [lush] Egypt is where they really lived.”

The sudden change in climate is an impressive site (prepare for breathtaking drone shots which would fit nicely in a promotional tourism advert) but the absence of vegetation at the necropolis presents a crucial challenge to the excavation – the heat. The trees in the city cool it down, but just a stone’s throw away at the tomb, it’s often ten degrees hotter. Digging in the Egyptian sun is gruelling work.

But the biggest obstacle is time. It’s March of 2019 and the team have six remaining weeks to make another major discovery before Ramadan, at which point their funding will be pulled by the government. The film is very much a slow-burn, as are most archaeological documentaries, but the race against the clock does provide an element of much needed suspense and urgency.

Wahtye, to whom the tomb is dedicated, was a senior official in the fifth dynasty of the pharaohs, but who he was and why such an elaborate catacomb was constructed for him is a mystery hidden within carved symbols, whose meaning has faded into obscurity. The writing goes from right to left, left to right and even bottom to top, so the first step is figuring out in which direction the text flows.

Expert cryptographers walk viewers through the basics of the techniques they use to decipher the hieroglyphics, uncovering astonishing hidden conspiracies and political scandals with thorough detective work.

The film is punctuated by animated explanations of cultural beliefs of ancient Egypt which contextualise the historical relevance of the “wow moment” discoveries in the tomb.

There is a certain irony in the Egyptian archaeologists’ reverence for their ancestors, since the tombs have been built and sealed so as to make them inaccessible to outsiders. These are sacred shrines, intended to remain undisturbed indefinitely, yet it is out of respect for these traditions and a yearning to understand them, that the wishes of the ancient Egyptians are defied.

There are few bells and whistles in Secrets of the Saqqara Tomb. It’s directed simply and earnestly. But it is still shrouded in a spooky, enticing haze which extends one’s curiosity beyond shiny objects, harnessing an appreciation for the fascinating historical mysteries buried beneath the dunes. DM/ ML

Secrets of the Saqqara Tomb is available on Netflix.
You can contact This Weekend We’re Watching via [email protected]

Klopp on the Premier League calendar: No matter what I say, it won't help. Waste of time
Barcelona paid tribute to Maradona with a minute of silence before training
Benzema does not train in the General group and works indvidiualno
Did you see the shape you wanted to draw? Victory twice tried to support Dzyuba with graphics in the sky, the first attempt was forbidden by the dispatcher
Aspilicueta on the match against Tottenham: Chelsea always want to be the no 1 club in London
Tebas on Messi: I Want to see Leo in La Liga as well as Mourinho, Pep, Klopp, Ronaldo
Farewell to Maradona in Argentina: there were only relatives, buried next to their parents
Source https://www.dailymaverick.co.za/article/2020-10-30-this-weekend-were-watching-buried-secrets/

Connected To Care: Coronavirus And Women's Challenges In Community Networks

Kenya’s govt pushes ahead with contentious NIIMS roll out

Governance: Why and How

Why Responsible AI is Built Around Human-Centred Design