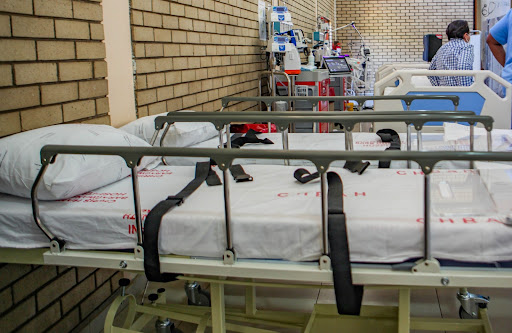 Part of the increased rate of admissions may reflect extra precaution on the part of parents given the new concern about the mutation. A paediatric report due later this week should provide more information.
Image: Bloomberg

Children under the age of two account for about 10% of total hospital admissions in Tshwane since the detection of new Covid-19 variant, according to the National Institute for Communicable Diseases.

More children are being admitted than during the early stages of the country entering the current fourth wave of infections, though a similar trend occurred during the third wave when the Delta variant was dominant, said Waasila Jassat, public health specialist at the institute.

SA scientists were last week the first to identify the new variant now known as Omicron, and while symptoms have been described as mild, the exact risk from the new strain is still uncertain. Governments across the globe stepped up travel restrictions in response, and the World Health Organisation warned that the variant could fuel a fresh surge in infections.

“The very young children have an immature immune system and they are also not vaccinated, so they are more at risk,” said Jassat, who was part of developing and managing SA’s national hospital surveillance system for Covid-19.

She said that part of the increased rate of admissions may reflect extra precaution on the part of parents given the new concern about the mutation. A paediatric report due later this week should provide more information.

In Tshwane, the municipality that includes the capital Pretoria, 52 children under the age of two years diagnosed with the coronavirus have been admitted and one has died, Jassat said. It’s not yet clear whether they contracted Omicron, now the region’s dominant strain.

“People are more likely to admit children as a precaution because if you treat them at home something can go wrong — especially very young children because there is a higher proportion of death,” Jassat said.

Scientists in SA said on Monday that existing vaccines are still likely to protect against severe illness, though very small children are not able to get shots yet. About a third of the country’s population is fully vaccinated.

During the Delta-driven third wave, hospital admission for those under the age of 19 jumped 43%, and the country has since opened up vaccinations to adolescents between 12 and 17 years.

“It does however appear that in this early part of this wave a higher proportion of children are being admitted than they were in the past,” Jassat said.

LOOK: Would you cross South Africa’s ‘most dangerous bridge’?

Let’s go to the moon together, say China and Russia

Nadal on brink of history after reaching Australian Open final

Know your runners: The inside track on the Cape Town Met

How life insurance can protect your child’s education

Chiefs will not get Sithebe unless they do right with us, says AmaZulu

Khune: I will retire after 10 years

WCED says SIU report made no findings of corruption, fraud against it

Julian Sotomey: The man who ‘met God’ after ‘dying for 10 minutes’

WATCH: Kairo Forbes’ adorable birthday tribute to her father, AKA

QUIZ | Is your news knowledge 'suspected of being dodgy'? Take our weekly quiz to find out

R120m Powerball jackpot tonight – what would you do with your winnings?

Pet anaconda Medusa on the loose in Phoenix