XENOPHOBIA: Protest against foreign nationals a signal that violence may follow, say experts

Only about 50 people attended a march against foreign nationals in Tshwane on Wednesday, but the event occurred as xenophobic rhetoric becomes more sophisticated and communities and their leaders look for scapegoats for South Africa’s many troubles.

Addressing Ambassador Kabiru Bala outside the Nigerian embassy in Tshwane on Wednesday, Action for Change leader Nandisa Gschwari demanded he apologise for the “atrocities” committed by Nigerians in South Africa and said all undocumented migrants must be deported.

Gschwari was part of a group of about 50 people who marched to the embassy yelling profanities about foreigners, who they claimed were responsible for human trafficking, drug abuse, violence against women and service delivery failures.

“If there’s smoke, there must be fire,” Gschwari claimed when asked what evidence she had that Nigerians and other foreign nationals were responsible for crimes such as human trafficking. 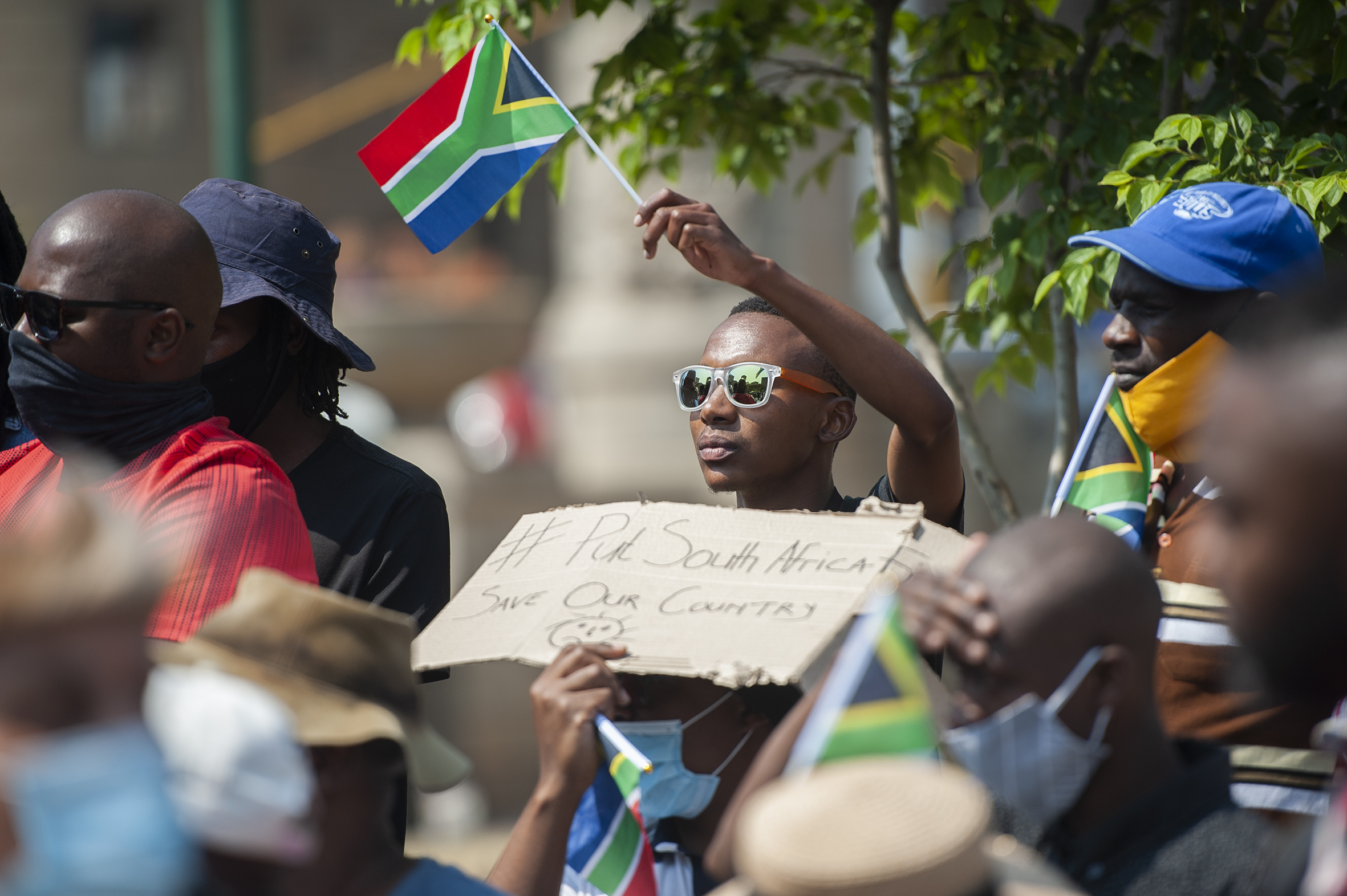 A man holds the South African flag while listening to a speech at Church Square.
Photo / Shiraaz Mohamed

The low attendance at the march might suggest there is limited support for acting on such xenophobic rhetoric, but anti-foreigner arguments have recently become more sophisticated and entrenched, which could lead to further xenophobic attacks as politicians try to stand out and communities and leaders search for scapegoats for the country’s problems.

The march was attended by unaffiliated individuals and relatively unknown groups such as Action for Change, Voice It In Action, Only One SA and the Khoisan Revolution Party. It drew widespread attention on Twitter, largely driven by former soldier Sifiso Jeffrey Gwala’s @uLerato_Pillay account.

Social media networks spreading fear and xenophobia claim there has been a surge in human trafficking in South Africa perpetrated by foreigners. The police have rejected the claim and fact-checkers have debunked wildly exaggerated claims on the crime.

“This is the real voice of the people of South Africa,” said 48-year-old marcher Simon Nhlapo from Germiston.

He claimed the ANC government had failed South Africans and the authorities could not curb crime, leaving citizens and foreigners in a competition for resources, with citizens on the losing side.

“As a result of that frustration, what is going to happen is violence. Violence is coming, we cannot run away from it,” said Nhlapo, wearing a Springbok jersey and carrying a knobkerrie.

In 2018, a Human Sciences Research Council (HSRC) survey found that the majority of South Africans held negative views about immigrants and the most common solution to xenophobia they offered was expelling immigrants. A recent Human Rights Watch report detailed repeated attacks against foreigners.

Peaceful demonstrations against immigrants, he said, should be viewed as “the canaries in the coal mine”. 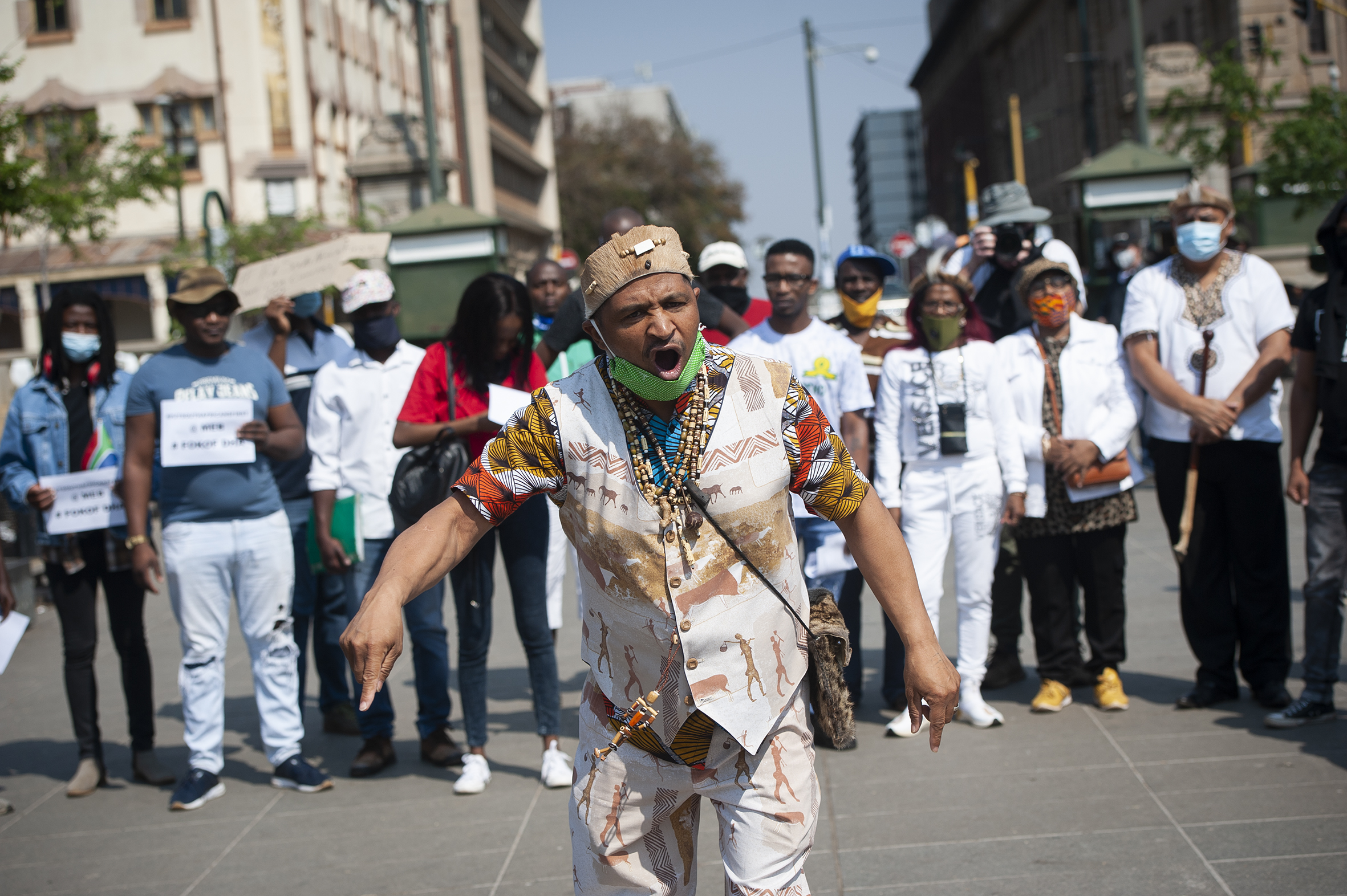 Prince Pieterson from Khoisan Revolution Party addressing protestors at Church Square before the group made their way to the Nigerian Embassy. Photo / Shiraaz Mohamed

Professor Suren Pillay from the University of Western Cape’s Centre for Human Rights Research said there is an increasing attempt at using more sophisticated online methods, such as dedicated and apparently well-funded Twitter networks, to link elite and popular sentiment against foreigners.

“There’s no organisation that’s actively involved here,” said a 46-year-old woman at the march, who was draped in a South African flag and would not give her name.

While xenophobia is sometimes viewed through the lens of poor locals in competition for resources with foreigners, studies have shown that South Africans across class lines hold anti-foreigner sentiments.

Professor Loren Landau from the University of Witwatersrand’s African Centre for Migration and Society said that while anti-immigrant sentiments are widespread, the march shows such rhetoric “may have its limits in terms of formal organising”.

Such public rhetoric, however, has been increasing, at least on social media and by more formal structures such as Herman Mashaba’s Action SA party and the African Transformation Movement, which plans to hold a march against foreigners in Tshwane on 28 September.

“I think that we’re starting to see the consolidation and formalisation of a discourse linking foreigners to crime, competition and even Covid,” said Landau.

“uLerato, Herman Mashaba, and others have helped popularly entrench the idea that immigrants are the problem. I think that with this idea in mind, people see attacking foreigners as a way to take back control, to assert themselves and their authority,” he continued.

Studies have shown there is no qualitative link between immigrants, crime and South Africa’s economic challenges (migrants have been shown to benefit their neighbourhoods and the economy), but foreigners are regularly made scapegoats for the country’s problems.

Speakers at the march in Tshwane complained of state dysfunction, crime and unemployment, which are legitimate issues, said Pillay, that often produced problematic and ineffective answers, such as expelling immigrants.

“There’s a scapegoat effect: Who can we blame for the fact that things are not going well?” said Gordon.

Pillay cautioned against pathologising the urban poor as xenophobic without addressing the real issues.

He said people speak from their experiences, which might include resenting the success of foreigners in the community, who have already taken the initiative to move countries and have to be industrious, with little government support from the South African government. 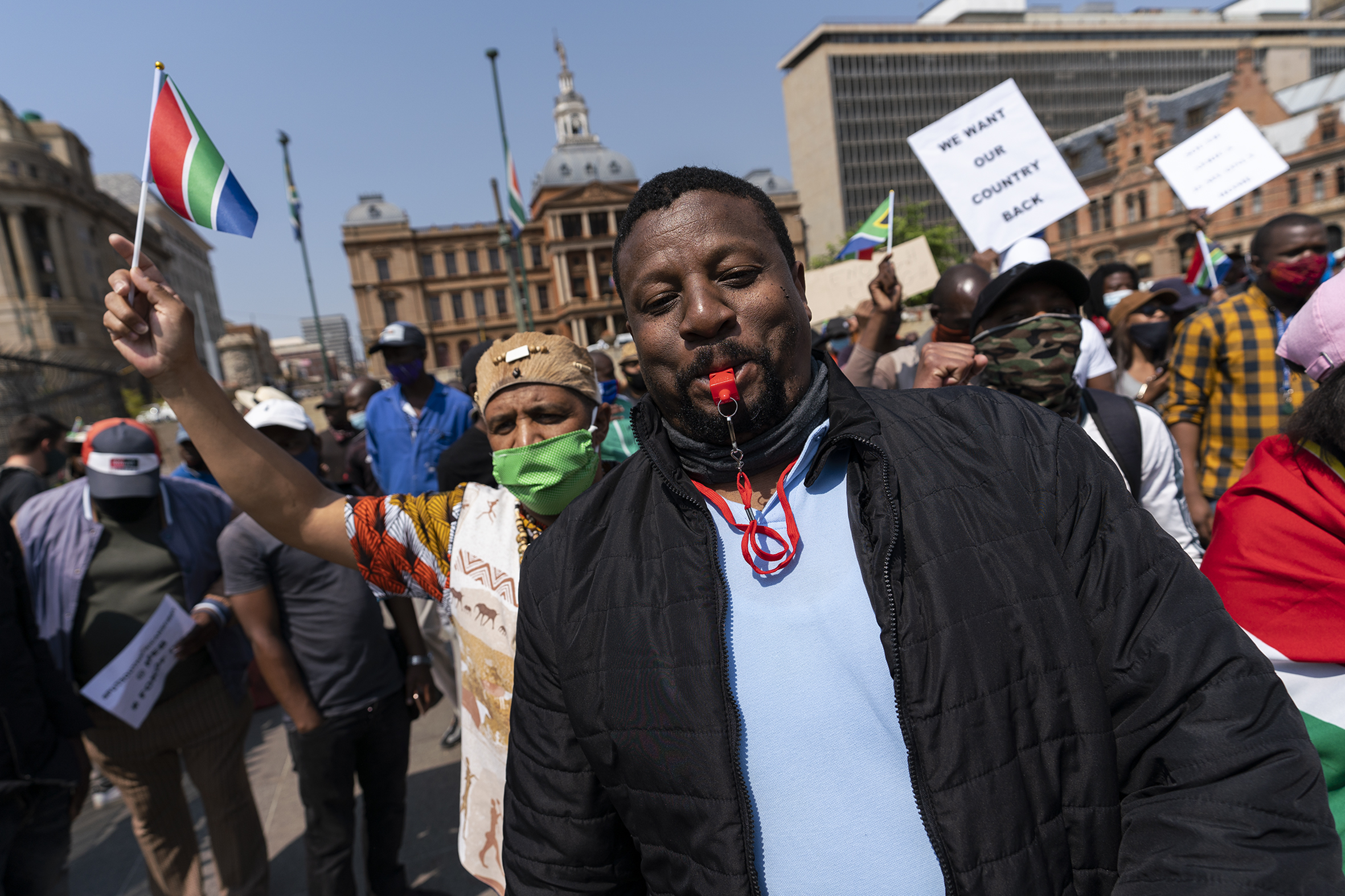 Several organisations under the banner #PutSouthAfricaFirst make their way from Church Square to the Nigerian Embassy where a memorandum was handed over.
Photo / Shiraaz Mohamed

People may have experienced crime committed by a foreigner or know some who reportedly have and attribute it to the whole group. A crime like human trafficking, which is “ripe for rumour and conjecture and speculation”, according to Pillay, is difficult to trace but simple to use to stoke fear.

The academics offered short-term solutions to South Africa’s xenophobia problem, such as implementing migrant integration programmes and political leaders making more responsible comments and publicly emphasising that the country’s development is inextricably tied to that of its neighbours in the region.

But, while little headway is made on the country’s broad challenges of crime, inequality, poverty and unemployment, foreigners will continue to be an easy target to blame.

Pillay said leadership is needed by all levels of government to both countenance xenophobic rhetoric and engage communities on their legitimate concerns, but said the government’s messaging has been “ambiguous”.

“I’m not persuaded that we’re seeing leadership on this,” he said. DM

Hans-Dieter flick: I Hope Alaba will sign a contract with Bayern. Our club is one of the best in the world
Diego Maradona: Messi gave Barca everything, brought them to the top. He was not treated the way he deserved
Federico Chiesa: I hope to leave my mark in Juve. We will achieve great results
The Coach Of Benfica: I don't want us to look like the current Barcelona, it has nothing
Guardiola on returning to Barca: I'm happy at Manchester City. I hope to stay here
Fabinho will not play with West ham due to injury
Ronald Koeman: Maradona was the best in his time. Now the best Messi
Source https://www.dailymaverick.co.za/article/2020-09-24-protest-against-foreign-nationals-a-signal-that-violence-may-follow-say-experts/

Zimbabwe: 'Potholes' From the Past Help Drought-Hit Zimbabwean Farmers Save Water