By CHANDA MUTALE-
Zambia is among the most admired countries on African continent due to its rich cultural background and history.
The country’s traditional ceremonies are a reflection of its diverse tribal groupings that have preserved their identities and coexisted in harmony since time immemorial.
The different traditional ceremonies celebrate customs, social life, rituals, oral history, material and spiritual culture of the people.
They provide a valuable opportunity for the rich cultural heritage to be passed on from generation to generation.
Most of the ceremonies have a deep meaning and in many cases are designed to invoke memories of the transformation from childhood to adulthood.
Most tribes in rural areas still practice initiation ceremonies for both girls and boys, which are generally conducted after puberty. 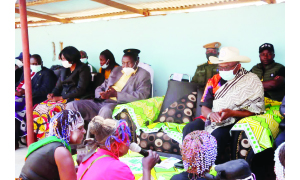 The traditional ceremonies that visitors are free to watch signify ancient times, when new kingdoms were being founded by ancient chiefs.
The ceremonies are usually splendid, colourful affairs with much symbolism in steeped in dance and traditional music.
One such event is the Chivweka traditional ceremony which is celebrated in July every year by the Luchazi people in North-Western Province.
The ceremony, which takes place in Kabompo District, celebrates the making of fire from wood.
This marks the peak of the ceremony.
This year, the ceremony climaxed on July 27, which was on Saturday.
Much as it has not been possible to do so in the past two years due to COVID-19 pandemic that could not allow large gatherings of people in one place, the holding of the ceremony this year was a sign of relief that life has almost returned to normal.
This year, the Chivweka traditional ceremony was charactersised by a number of cultural groups, among them the Zambia Army and Zambia National Service (ZNS) cultural troop which performed a number of outstanding dances.
In attendance was Defense Minister Ambrose Lufuma, who represented Vice President WK Mutale Nalumango, some Government officials, traditional leaders from various parts of the country and members of the public.
The Luchazi people are believed to have been the initiators of making fire using the natural substances such as the muntendele tree sticks and Zinkau substances from Muncha natural fruits.
Two muntendele sticks are rubbed together to create friction which ignites into a flame.
The flame is harnessed and used to make fire.
In a bid to preserve Chivweka Yekelelo Yamungongo cultural traditional values for the upcoming generation, the Chivweka national organising committee chairperson appealed to the Government to address challenges that have remained unattended to over the past years.
Among these challenges is the poor road network in the chiefdom, especially the road from the Boma to the palace.
Year in year out, Kabompo District administration is engaged to grade the road and this time around, ZNS worked on the areas of the road that were bad to enable people to use the road.
Telecommunications network in the area is also poor.
The only network service provider available is MTN, which is not reliable.
The traditional leadership called for the upgrading of the tower in the chiefdom for easy communication.
The local community also called for the upgrading of Kalunga Health into a mimi-hospital, and called for the provision of an ambulance to transport patients to main hospitals.
The community also called for the upgrading of Kulunga Secondary School.
The Vice President who graced the occasion said the New Dawn Government is working tirelessly to mobilise resources from cooperating partners to construct feeder roads across the country in a bid to improve the road network.
Speaking in a speech read for her by Mr Lufuma, Mutale-Nalumango said the Government has also procured acrow bridges to be erected across the country, which will also cater for Kabompo District once a contractor has been shortlisted.
Ms Nalumango said the Government would also consider constructing a secondary school in the district in order to improve the quality of education.
She said the Government is also looking at ways to facilitate the connection of the area to the national electricity grid.
Ms Mutale-Nalumango said Zambia is better and stronger when its citizens are united under the country’s motto ‘One Zambia, One Nation’ despite the diversity in language, beliefs and traditions.
She said President Hakainde Hichilema has attached great importance in the promotion of traditional ceremonies and the role of traditional leaders play in national governance.
“Traditional ceremonies play an important role in promoting a sense of belonging, nationalism and preservation of the country’s cultural heritage,” she said.
Ms Mutale-Nalumango said the New Dawn administration acknowledges that traditional ceremonies are a unifying factor as they provide a vital platform for the Government and the traditional leadership to interface and share ideas for the betterment of the people.
She said the Government is committed to continue encouraging traditional leaders to celebrate traditional ceremonies as a way of preserving the country’s national identity.
The Vice President said the Government will continue to promote coexistence between and among all the people in the country in general and in North Western Province in particular.
She said it was gratifying that one of the prominent features of the Chivweka traditional ceremony was the starting of fire using sticks.
She said the skill to make fire is the pride of the Luchazi people because it helps to preserve their culture and their customs.
Lukanda, an initiation ceremony were boys are taken for circumcision, is also practiced as a way of reducing HIV/AIDS and the Vice President took time to encourage traditional leaders to ensure that they pass on such practices and customs to the future generations.
Ms Mutale-Nalumango said through increased and consistent disbursement of the Constituency Development Fund (CDF), the Government will ensure that it addresses challenges being faced in the districts across the country.
“The New Dawn Government intends to disburse CDF to all constituencies across the country in full and with no exception. By the time will be reaching December, each and every constituency would have received money for the development of their respective areas,” she said.