DRC refugees on the loose in Uganda, ordered to go to transit centre 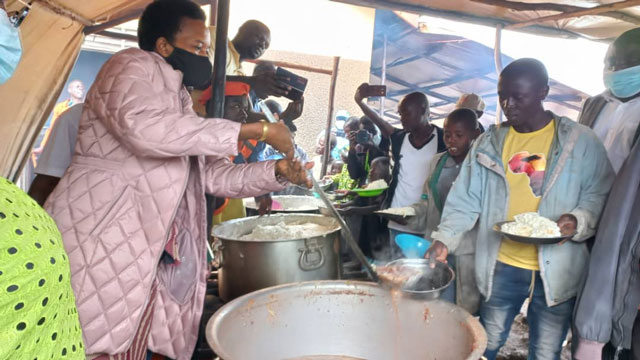 Kisoro, Uganda | THE INDEPENDENT | A fresh ultimatum has been issued to refugees who are roaming around Bunagana Town Council in Kisoro District to either enter the gazetted refugee transit centre in Nyakabande sub-county or return to their country.

The seven-day ultimatum was issued on Friday afternoon by the Minister of State for Disaster Preparedness and Refugees Esther Anyakun while assessing the situation of refugees in Kisoro district where more than 20,000 refugees converged after the outbreak of fighting between the M23 rebels and the Armed Forces of the Democratic Republic of Congo (FARDC) on March 28.

Douglas Asiimwe, Uganda’s Acting Commissioner for Refugees in the Office of the Prime Minister, says that 17,336 refugees are currently camped at the Nyakabande reception centre, while 3,064 refugees have been transferred from Nyakabande to Nakivale Refugee Camp in Isingiro district.

Asiimwe, however, says that despite the huge number at Nyakabande, thousands of their counterparts are still roaming at Bunagana border and are hesitant to join the reception centre. Others have declined transfers from the reception centre to the Nakivale refugee settlement.

Kisoro Resident District Commissioner Hajji Shafique Ssekandi Ssengoba says that so far, there are about 9,000 refugees at the Bunagana border. Ssekandi says that most of the refugees at Bunagana decided to rent rooms while others are seeking accommodation services from their relatives.

He, however, says that those harboring refugees are contravening the Refugee Act which prohibits any person from hosting refugees without permission from the Office of the Prime Minister. He says that it is unacceptable for asylum seekers to decide for themselves where to stay.

Ssekandi says that even though district authorities o issued a two-day ultimatum n March 31 for refugees to go to the Nyakabande Reception Centre or cross back to their country, the refugees kept a deaf ear. He adds that an operation to chase them from the border was hampered by fresh fighting mid last month.

In a statement, Anyakun directed security to start operations and compel all refugees to leave Bunagana after seven days. Anyakun says that those who fail to abide by the directive should cross back to Congo or else will be declared rebels in Uganda.

According to Anyakun, the refugees are causing a security threat since they are not screened and registered. They are at the same time putting Uganda’s health at stake because nobody knows their status regarding COVID-19 and Ebola.

Meanwhile, normalcy has returned in Rutshuru Territory, North Kivu province where the fighting started, according to sources.  This is attributed to the lull observed in this area, plagued by clashes between the FARDC and the M23. However, economic activities are still idling because businesses have not yet reopened.

However, local administrative sources also indicate that the M23 rebels are still entrenched in the hills of Tshanzu and Runyoni, while the FARDC consolidate their positions in the villages of Rwanguba, Tshengerero, Gisiza, Kamira, Kabindi and Jomba, along the Rutshuru-Bunagana road axis.