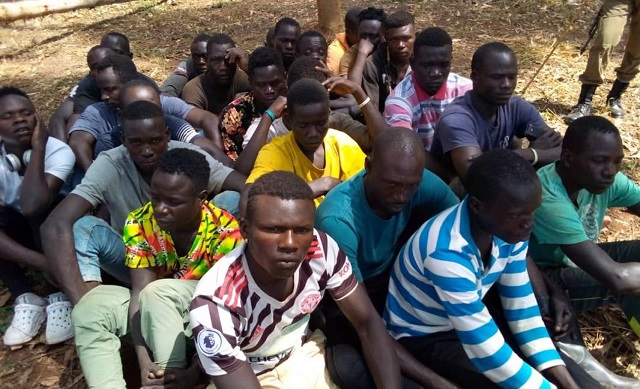 The workers are accused of attacking over 20 households in Ndibulungi and Yandwe villages, Butuntumula sub-county on Friday night. They were arrested on Saturday and are currently being detained at Luwero central police station.

Isah Ssemwogerere, the Savannah Regional Police Spokesperson explains that on Friday, a casual worker identified as Sunday of Victoria Sugar Limited and a woman hired a boda boda rider Stephen Ssenkosi at 3,000 shillings to transport them to the sugarcane plantation located at Kaaya ranch.

Ssemwogerere says that on reaching Kaaya ranch, a disagreement broke out after the boda boda rider received 10,000 Shillings but decided to return a balance of only 5,000 instead of 7,000 Shillings.

He adds that when the two protested and demanded the balance, the boda boda rider decided to raise an alarm claiming that they wanted to rob his motorcycle.

The boda boda rider rang his colleagues who responded by arresting and transferring Sunday to Ndibulungi trading center where they beat and chopped off some of his fingers leaving him lying unconscious until he was rescued by the police.

He was transported to Luwero hospital for treatment and police immediately picked two people over mob justice.

But when his colleagues got the news, they decided to attack the villages and cut down food crops, and vandalized shops in a revenge attack.

Ssemwogerere says that police have since arrested 50 suspects over the attacks and they are facing charges of malicious damage.

Cossy Buule, the LCI chairman of Yandwe village says that at least 13 households in his village were attacked and property destroyed. Buule added that three residents were also beaten and sustained minor injuries in the attacks.

Salim Zimula, the Kakabala parish councillor says that in the attack, several mobile money kiosks were vandalized and money stolen.

Zimula adds that some windows of the houses were smashed and household items destroyed.

Isaac Wampamba, the district councillor for Butuntumula sub-county says that the time police picked the suspects on Saturday, the suspects were found in a meeting drafting a letter detailing why they resorted to violence.

Wampamba says the group alleged that they were protesting against mob action against their tribe mate and fellow worker.

The district was also ranked second with the highest cases of malicious damages after registering 146 cases.