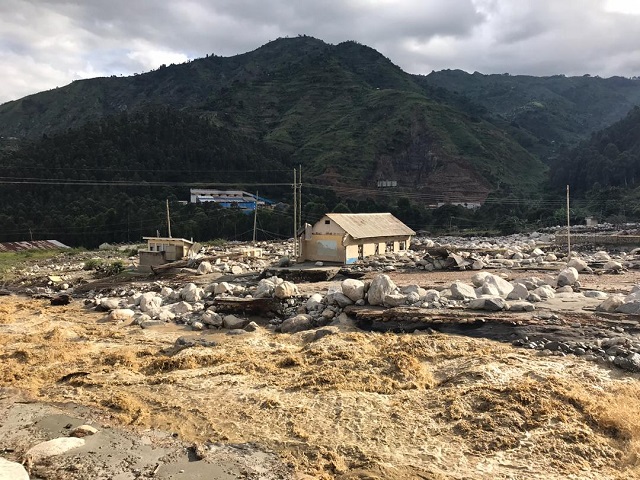 Kasese, Uganda | THE INDEPENDENT | The ongoing response to control flooding of River Nyamwamba in Kasese district only covers 5% of the total catchment and most of the work is on an emergency basis, David Duli, the Country Director of World Wide Fund for Nature-WWF has revealed.

According to Duli, there is a need for the government to inject more resources and scale up the restoration process of River Nyamwamba to cover the whole catchment area. The government through the Ministry of Water and Environment secured funding from the World Bank to implement integrated water management and development projects in different water management zones of Uganda.

WWF is implementing the midstream activities after signing a contract with the Ministry of Water and Environment and its activities include raising community awareness on environment conservation, riverbank stabilization, and supporting the livelihood of communities along the catchment area.

However, Duli says there is a need for holistic integrated planning for all rivers originating from the Rwenzori mountains if flooding and its effects are to be dealt with permanently. He says there is a need to roll out mass campaigns to cover all the bare hills and encourage communities to voluntarily conserve the environment.

Duli who was addressing a team from the ministry of water on Wednesday that had gone to assess restoration works on the mid-stream of Nyamwamba, said that during the implementation of the project, they are encouraging the local communities to own the re-establishment plans. He said they are rolling out a project to plant trees that have an economic value around Rwenzori mountains national park.

Joseph Kule Muranga, the prime minister of Obusinga Bwa Rwenzururu-OBR and Kasese LCV chairperson, Eliphazi Muhindi also asked the government to extend these interventions along the whole catchment area. They said that similar interventions have failed in the past because they were only concentrated on a small part of a single river.

Evelyne Mugume, the Kasese Municipal Environment Officer says that 25kms of the river bank have so far been restored. She is pleased that the community has been supportive and is participating in some of the interventions when called upon.

The permanent secretary in the ministry of water, Alfred Okot Okidi, said that they are carrying out studies for the greater Rwenzori area to find permanent solutions to the flooding and are hopeful that once completed, it would provide a guide on complete catchment management and the development plan.

He said that at the moment, they are only carrying out emergency measures to ensure that in case of flooding, the impact is not severe.

Okidi explained that the current interventions have started yielding results attributing it to the use of the community-led approaches in the restoration campaign.

The Natural Resources Defense Initiative-NRDI is working on restoring the upper stream of the river while the downstream is being worked on by the Mubuku Integrated Framers Association-MIFA.