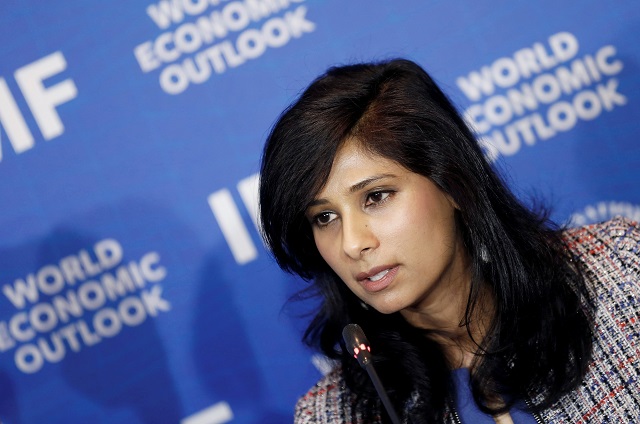 Davos, Switzerland | Xinhua | The International Monetary Fund (IMF) on Tuesday warned of further headwinds for the global economy and spiralling inflation around the world due to the conflict in Ukraine, while voicing that China will remain an engine of growth after the “near-term headwinds”.

“We are seeing additional weaknesses in the global economy. The war is creating immense stress around the world with higher commodity prices everywhere,” Gita Gopinath, the first deputy managing director of the Washington-based IMF told Xinhua during an exclusive interview at the World Economic Forum (WEF) in Davos, Switzerland.

The Chinese economy, meanwhile, is expected to grow 4.4 percent this year, followed by a 5.1 percent growth in 2023, the report also noted.

When talking about her outlook on the Chinese economy, Gopinath said, if China can deal with the “near-term headwinds in terms of COVID” and others, then, “of course, it remains one of the important engines of growth.”

From the global economy’s perspective, Gopinath said China’s growth has implications for global trade and for growth in other parts of the world.

According to China’s National Bureau of Statistics, the country’s gross domestic product (GDP) grew 4.8 percent year on year in the first quarter, marking a steady start in 2022 in the face of global challenges and a resurgence of COVID-19 cases.

In March, China set its economic growth target at around 5.5 percent for 2022, after it saw a strong rebound of 8.1-percent growth in 2021 and became the only major economy to record growth in 2020.

Meanwhile, the IMF’s April report also wrote that global inflation is projected at 5.7 percent in 2022 in advanced economies and 8.7 percent in emerging markets and developing economies, 1.8 and 2.8 percentage points higher than the January projection.

Gopinath said that inflationary pressure remained a top concern. “In most countries of the world, headline inflation is at record highs because of high levels of energy prices and high levels of food prices,” she emphasized.

“This is why we see central bankers react much more strongly and aggressively to inflation and raising interest rates more sharply than was expected. This of course has implications for emerging and developing economies where debt is already quite high, and the risk that their borrowing costs may go up much more quickly is a real element of stress.”

She also said that she was worried about the current trend of de-globalization: “This is another big concern for us, which is the phenomenon of decoupling, of fragmentation in the world into geo-economic blocks.”

“The pandemic made people more conscious of the need for resilience in their global supply chains… But it is very important though that trade policy does not lead to fragmentation of the world, because that can be very costly for global growth.”

The WEF’s Annual Meeting 2022 is currently held on May 22-26 under the theme “History at a Turning Point: Government Policies and Business Strategies”. It brings together nearly 2,500 leaders from politics, business civil society and media from around the globe.