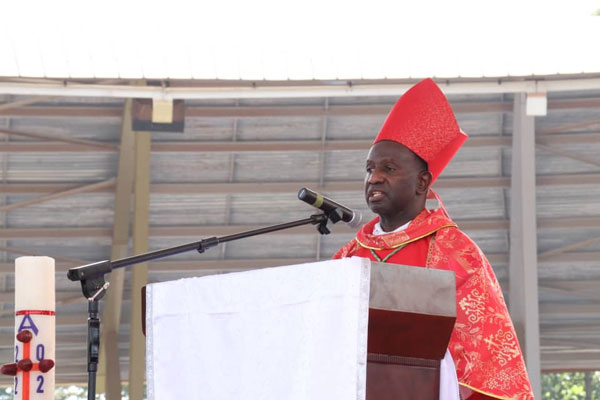 Kampala, Uganda | THE INDEPENDENT | The Bishop of Fort Portal Diocese, Robert Muhiirwa Akiiki is bothered by the ever-rising unchristian practices at a time when Christianity has been spread nearly to every corner of the country.

Bishop Muhiirwa, who also doubles as the vice-chairperson of the Uganda Episcopal Conference, notes that 134 years ago young Christian converts denounced anti-Godly practices by paying a huge price with their lives when they were killed on the orders of Kabaka Mwanga.

“It is unfortunate that we, the people that the martyrs generated with blood, are buried in such vices,” Muhiirwa noted while delivering his homily during the Martyrs Day Mass at Namugongo in Wakiso district Friday.

He said that currently, many Catholics are openly practicing witchcraft looking at it as a source of wealth and health yet the martyrs who were not rooted in faith as they were new converts renounced such sheer nonsenses and put their trust in Christ.

“It is a pity today, some Christians still go to witch doctors to seek assistance. Let’s not be double dealers of our faith. Let’s entrust our children with loving one God,” he said.

The bishop also castigated the increasing sexual abuses like homosexuality, unfaithfulness in marriages, and the ever-growing cases of incest, which came to the fore during the COVID-19 induced lockdowns.

He noted that several martyrs praised the chastity and purity of their bodies with many giving up on having many wives while several denounced offering sexual advances to Kabaka Mwanga, who is said to have been a homosexual.

Bishop Muhiirwa attacked fellow clergy whom he accused of giving up their Cardinal roles of caring and ministering to the faithful and focusing their mind on their personal projects. To him, if priests fail to do their duties, many believers will be lost to the aforementioned vice.

He also guided that there is a need to reignite the fire of Catholicism right from families and reawaken the lay apostolic movement right from schools to tap into the youngsters before they are swayed away by earthly things.

Muhiirwa further noted that as the faithful celebrate Uganda’s martyrs they should look up to their good example. “I invite you to be inspired by our martyrs and follow their example of unshakable faith in word and deed, which rare dedication continues to be challenging to us Christians today. In their bravery, the martyrs encourage us to emulate them as role models and walk in their footsteps,” he added.

The prime minister, Robina Nabanjja sent the congregation into prolonged laughter as she carried the basket of offertory on her head. She was flanked by the Chief Justice, Alfonso Owiny, and Speaker of Parliament, Anita Among.

This year’s Martyr’s Day celebration comes after a two-year lull due to the COVID-19 induced lockdown and restrictions. Fort Portal Diocese, which last animated the martyr’s day celebration 25 years ago led today’s event, under the theme, “Baptized and sent to witness Christ with love and hope”.

Uganda’s Martyrs’ Day holiday commemorates the late 19th-century martyrdom of 23 Anglican and 22 Catholic men who were put to death on the orders of then-King of Buganda Mwanga II for having converted to Christianity.