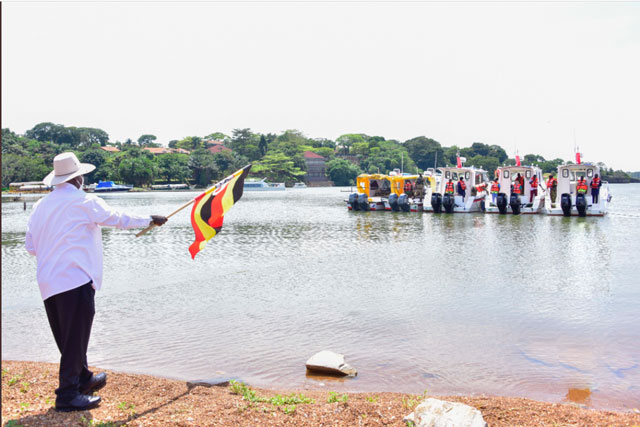 President Museveni has flagged off Uganda’s first Marine Ambulances under the marine unit of the Ministry of Health that will help bring medical services closer to the people living on the Islands. PHOTO PPU

He made the statement after commissioning 12 marine ambulances at the Uganda People’s Defence Forces-UPDF marine base in Entebbe. The event took place on Friday, May 20th.

Museveni says he is concerned that none of the public universities currently teaches marine engineering and yet people are operating boats, canoes and ferries across the country. There were nine public and 44 private universities in the financial year 2017/2018.

The President has also ordered the Prime Minister Robinah Nabbanja and relevant ministries to ensure measures such as enforcement on speed governors, are put in place to stop road accidents.

Police figures show that over 18 people  have been killed in road accidents since last month.

Museveni however commended the Ministry of Health and development partners namely GAVI, Global Fund and UNICEF for providing the water ambulances which will be deployed to 12 districts with islands or near water bodies.

The districts include; Mukono, Kalangala, Buvuma, Ntoroko, Serere, Amolatar and Jinja. Others are Obongi, Mayuge, Namayingo, Kabale and Kumi.

The Minister of Health, Dr. Jane Ruth Aceng says the marine ambulances will be operated by UPDF and police  officers because the health ministry currently lacks marine engineers and crew members. The ministry will provide emergency medical personnel while the ministries of defence, works and internal affairs will facilitate operations  such as licensing, inspection and maintenance.

Dr. Charles Ayume, the  Chairperson of  Parliamentary committee on health, says there is need to prevent accidents and lifestyle diseases to reduce on the need for ambulances in the water and mainland.

Dr. Aceng says water ambulances consume a lot of fuel. She also noted that a water boat uses 200 litres for a return trip for Entebbe and Kalangala,  which is fuel that ten road ambulances would need to evacuate patients and emergency cases at a go.

As a result, she says the finance ministry must consider requests for extra money for the water ambulances. Dr. Aceng says two more boat ambulances are expected to arrive soon.

As a result, there will be 14 new  boat ambulances by end of the year. Of these, three are equipped to provide  mobile intensive care unit services. These three ambulances were bought by the government of Uganda at a total cost of 510,000 US Dollars, about Shillings 1.8 billion.

The rest of the boats have been bought with funding amounting to 1.8million US Dollars, about Shillings 6.6 billion from GAVI and Global Fund, according to UNICEF Country Representative Munir Safieldin.

Safieldin says the funds were channeled to UNICEF which procured the boats, which will be “, essential to supporting the government’s continued efforts to strengthen the health system…allow health workers to reach locations that are only accessible by water and will facilitate access to emergency care by providing critical ambulance services.” He is also happy that health workers will use the ambulances for mass vaccination in the fishing communities and hard to reach islands.

Legislators from the 12 districts want the ministry of health to ensure the water ambulances operate.

Amolatar Woman MP, Agnes Atom, Kalangala Woman MP, Hellen Nakimuli, Julius Mukasa Opondo, the Bujjumba County say the local governments need to be involved in the supervision and safekeeping of the boat ambulances because they have not been included on the memorandum of understanding with the health ministry.

Meanwhile, Dr. Diana Atwine, the Permanent Secretary at the health ministry, says the new boat ambulances have tracking devices. She noted that the ministry had taken time to dispatch the boats before installing tracking devices, having recorded theft of engines for 8 of the eleven boats procured over a decade ago.