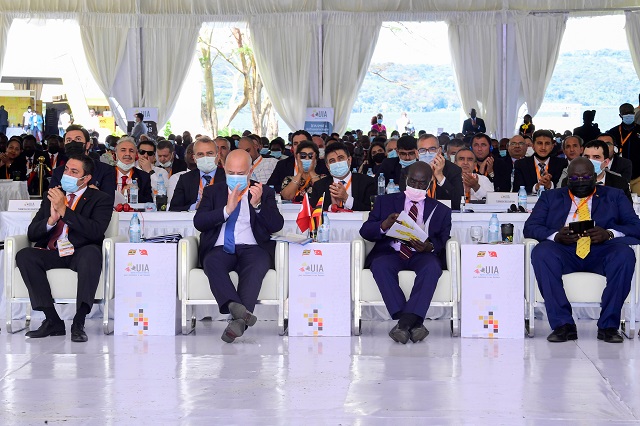 Kampala, Uganda | THE INDEPENDENT | President Yoweri Museveni has said he doesn’t care who owns what business in Uganda for as long as the businesses are generating revenue for the country.

Speaking to the Deputy Minister of Trade in Turkey, Riza Tuna Turagay at the sidelines of the ongoing Uganda-Turkey Investment, Trade and Tourism summit at Munyonyo Commonwealth Resort, Museveni said companies irrespective of who owns them, are beneficial to the country’s economic transformation.

Museveni informed the visiting Turkish trade minister that now Ugandans are waking up and engaging in agro-production, the reason he wants more factories for value addition.

“For us, we don’t insist on ownership of factories, what is important is investing here. I don’t care if they are owned by Turkey or if they are ours. These companies create value for the locally produced products, they use our electricity, and water and create employment,” Museveni said, and appreciated the Turkey government for expressing interest in investing in Uganda,

He added that the concerned ministries should speed up the process of signing a Memorandum of Understanding concerning economic transformation, protecting and promoting investment among others.

Turagay said that his country is interested in investing in Uganda given its potential, adding that Turkey has specialized in the production of textiles and industrial products. He said that they are currently enjoying a trading volume of USD 70 million with Uganda and that they generate a total of USD 225 billion per annum from its global exports.

Over 90 Turkish companies were present at the summit. Museveni also met a number of Turkey-based entrepreneurs especially those who expressed interest in coming to Uganda to invest in the construction industry and technology among others.

The summit was organized under the President’s guidance as part of efforts to boost economic ventures between Uganda and Turkey. It was attended by the Turkish Ambassador to Uganda, H.E Karem Alp, Ministers of State for Foreign Affairs Okello Oryem, and Minister of Investment and Privatization Evelyn Anite.

Earlier, President Museveni said that the NRM identified four principles that would enable Uganda to prosper and improve the welfare of Ugandans. They include patriotism, pan Africanism, social-economic transformation and democracy.