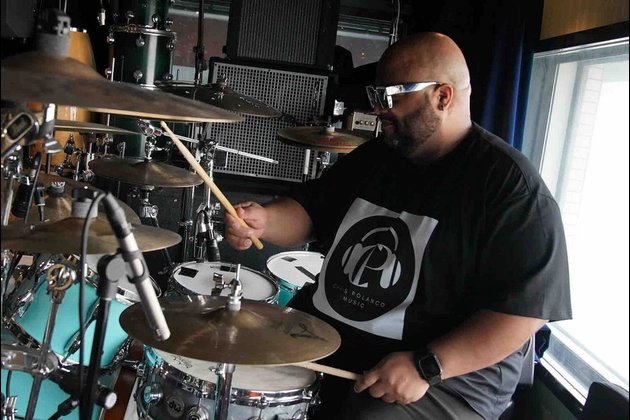 "Everything is meant to be," said Polanco, who has experienced ups and downs in his roller coaster ride as a musician in Hong Kong.

"It's kind of weird because when I arrived here, I fell in love with the city immediately. I felt like, this is home," said Polanco in a music production studio in Hong Kong's Central District.

This sense of connection runs through his entire music career, which is highlighted by high-profile partnerships with renowned singers such as Eason Chan as well as his unexpected popularity singing with fans on Instagram.

"Everything is meant to be," Polanco likes to say. For the 44-year-old who has experienced ups and downs in his roller coaster ride as a musician in Hong Kong, life is full of magic links.

In the year 2000, Polanco took his first flight out of the Dominican Republic for a contract job at the Ocean Park in Hong Kong. For six months, he performed Latin music before the dolphin shows to warm up the crowd.

"In general, Latin music is very upbeat, entertaining and interactive. And the Ocean Park has a tropical feel. It connected right away," he said.

Now speaking fluent Cantonese, he would switch among Spanish, his mother tongue, as well as English and Cantonese while chatting with friends from all over the world.

Despite the language differences, he thinks that Cantonese pop music and Latin music have a lot in common.

"When people think of Latin music, they think of only fast music. But Latin music has a lot of different styles. It can be slow, which is very similar to Cantopop," he said, starting to sing a classic Spanish song to make the point.

In August, Polanco released his first Cantonese single, with a music video showing him playing instruments and singing with his iconic sunglasses.

The song was well received among audiences from different cultural backgrounds. In Chinese, English and Spanish, his fans replied: what a great song! Thank you, Chris. 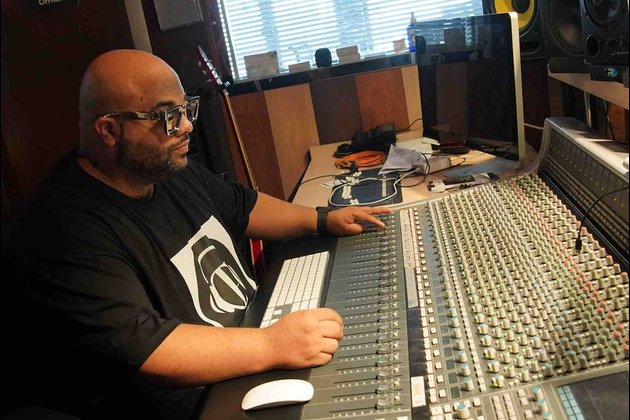 By nature, Polanco is an emotional man. When he plays a sad song, the inner corners of his eyebrows would be angled upward to show a sad look. When a fan resonates with his music, excitement would creep onto his face.

The signature sunglasses, which have already become part of his public image, hide emotions including both joy and sorrow.

His "low time", Polanco recalled, was when he resigned from his second job in Hong Kong, jobless and struggling to pay rent.

"My mom called and said, just come home. I was like, no, I feel like I am connected to this place," he said.

Music was his cure at that time. He would write songs in the daytime. When night falls, he would watch Cantonese operas on TV, which gave him peace and strength.

"I guess I was Chinese in my previous life," he laughed.

Earlier this year, Hong Kong was hit hard by the fifth wave of the COVID-19 pandemic. Staying at home, Polanco started to produce Instagram posts that allow people to sing with him.

Wearing his T-shirt, sitting in front of a keyboard, Polanco would start with "Alright, sing this with me," and then it goes a popular song, in Cantonese, English, Mandarin, or Spanish.

The videos quickly went viral, and Polanco gained more than 80,000 fans in three months. He was glad to be able to inspire and bring positive energy to people during difficult times.

"It's not only about us singing, it's about people sharing their singing with the world. That's really amazing," he said.

With music, Polanco is able to connect with people around the world.

"Music is my channel and call to bring positive messages to people," he said.

As a member of the DUO band, which tours with Eason Chan across the world, Polanco grows a connection with the other members, whom he considered family.

"We got so attached to each other that music came to become a secondary thing," he said.

He also convinced his son to move to Hong Kong five years ago, who was enthralled by the vibrant city and made it home.

Hong Kong has one of the best ecosystems in the world for musicians, and he is taking advantage of that environment to preserve and develop Cantonese music.

"I hope the new generations would go and listen to those Cantonese songs and understand how beautiful music can be," he said.

To be a real Hong Konger, Polanco needs a Chinese name. One of his fans shout out the name "Chan Kit" in Cantonese at one of his performances, and he gladly accepted it.

Like many other things in his life, things just happened naturally.

"I arrived one day and couldn't imagine that I would fall in love with this great city," he sings in the music video, this time with his sunglasses off, showing a big smile on his face.

"Finally the day had arrived for me to take the decision. I'm so happy, lucky to be living here."

Haiti - The single digital book, a real change in the way of teaching Libre.com news 7-7

iciHaiti - NOTICE : No senior official can leave the country without the authorization of the PM

iciHaiti - Social : Play and discover the Christmas spirit with Digicel

iciHaiti - Education : 53% of schools are functioning, rate by department

More than 100 Haitian migrants found on island near Puerto Rico

Haiti: Inside the capital city taken hostage by brutal gangs

iciHaiti - Economy : Dominican exports to Haiti, affected by the crisis, remain on the rise

iciHaiti - Pétion-ville : Arrest in Pernier of a female gang member

World Cup 2022: either Morocco or Senegal could break the glass ceiling

iciHaiti - Education : Installation of 5 new executives at the Ministry

The five best fiction books of 2022

iciHaiti - Diplomacy : New Ambassador of the European Union in Haiti

iciHaiti - Environment : Training on the prevention and control of forest fires

FIFA WC: Germany crash out despite 4-2 win over Costa Rica

Germany crash out of World Cup despite victory over Costa Rica

iciHaiti - Repatriations : March against mistreatment and racism of Dominicans