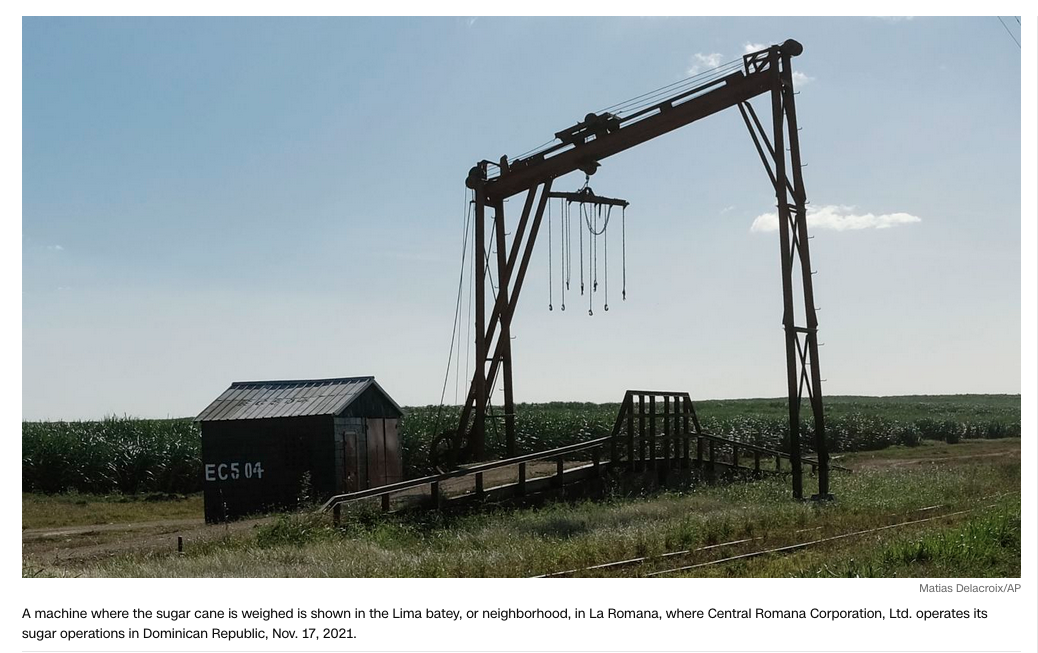 US authorities will block imports of sugar produced in the Dominican Republic by company Central Romana, on suspicion of forced labor at its facilities.

US Customs and Border Protection (CBP) will detain the company’s raw sugar and sugar-based products at all US ports of entry effective Wednesday, the agency said in a statement published that day, citing “inhumane practices.”

Central Romana is the largest producer of sugar in the Dominican Republic, acording to its website.

The decision to ban its sugar is “based on information that reasonably indicates the use of forced labor in its operations,” reads the CBP statement.

“CBP identified five of the International Labour Organization’s 11 indicators of forced labor during its investigation: abuse of vulnerability, isolation, withholding of wages, abusive working and living conditions, and excessive overtime,” it said.

“The rationale behind this measure does not reflect the policies and practices of Central Romana,” it said, adding that the company has spent “millions” to improve living and working conditions, “guaranteeing living wages and increased benefits,” and offering educational and training programs.

The company, which started operating in 1912, also works in a number of different industries, including real estate; airport and port operations; and meat and dairy production, according to the company website.

US authorities have been investigating labor issues in the Dominican Republic’s sugar industry for a number of years.

“While the country’s Ministry of Labor and sugar companies have made important progress, concerns remain about dangerous working conditions, verification of pay and hours, unsuitable living conditions, workers’ precarious legal status and other potential labor rights abuses,” the US Department of Labor said in a statement published September 13.

Faces of a divided island

The department also added sugarcane from the Dominican Republic to its List of Goods Produced by Child Labor or Forced Labor that month.

The Caribbean nation’s sugar industry has traditionally relied on workers from neighboring Haiti. In recent years the Dominican Republic has stepped up efforts to expel undocumented Haitian migrants amid rising xenophobia.

iciHaiti - Insecurity : Kidnapping of the Rector of the Public University of Bas-Artibonite

iciHaiti - Concacaf Championship U17 : No break for our Grenadiers

iciHaiti - Insecurity : The DG of the National Equipment Center kidnapped

iciHaiti - Insecurity : 69% of Haitians are for an international intervention (complete survey)

iciHaiti - Migration : Stranded at the border between Peru and Bolivia, 7 Haitians died

iciHaiti - Politic : The USA and Canada little interested in leading a special intervention in Haiti

US warns its darker-skinned citizens of Dominican Republics migrant crackdown

iciHaiti - Circular : Clarification on the documents sanctioning the graduation exams

Haitians Seen Crowding Into Migration Centers Seeking Passports To US

Is it possible to visit Russia as a tourist in 2023

iciHaiti - Hotel School of Haiti : Day of integration of the vacation p.m.

iciHaiti - IMPORTANT - Visa applications for Brazil - iciHaiti.com - All the news in brief 7-7

Haiti - Loss of more than 3,500 jobs announced in the textile sector Libre.com news 7-7

iciHaiti - True and False : Details on the day of unrest in Gonaïves

iciHaiti - Insecurity : A driver of the Cuban Medical Brigade kidnapped

iciHaiti - Peru : A bus falls into a ravine, 8 Haitians killed

Four Key Suspects in Haiti Presidential Slaying in US Custody